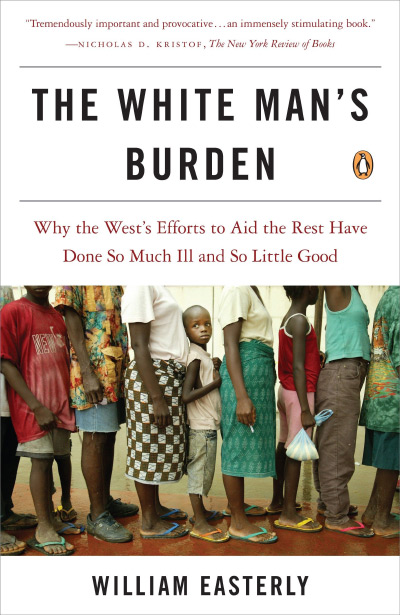 The White Man’s Burden
Why the West’s Efforts to Aid the Rest Have Done So Much Ill and So Little Good
William Easterly
Kindle Hardcover Paperback Audiobook Audio CD
This book review appeared in the Spring 2007 issue of The Independent Review.

William Easterly reminds us that rich-country governments’ efforts to help poorer nations raise their living standards go back at least to Robert Owens’s utopian visions in the nineteenth century. Owens argued that “through the progress of physical and mental science . . . perpetual prosperity” for all was in sight (p. 19). However, this particular road to riches, despite being paved with the best of intentions and billions of dollars (and other currencies), is littered with countless failed theories and “bold initiatives” and shows no clear-cut evidence of ever reaching its final destination.

A member of New York University’s economics department, Easterly is a former World Bank senior staffer with a refreshing sense of humility (two properties not often found together). Now, after an earlier frank discussion of foreign aid in his book The Elusive Quest for Growth: Economists’ Adventures and Misadventures in the Tropics (Cambridge, Mass.: MIT Press, 2001), he reveals in The White Man’s Burden the secret of economic growth: there is no secret! Not only does no magic formula exist to help poorer countries raise their living standards, but substantial evidence indicates that many (most?) foreign-aid programs hold back the search for local solutions to overcome the barriers to economic growth and to aid the poor by using local institutions and markets.

Why do World Bank billions, U.S. Agency for International Development grants, and International Monetary Fund “Poverty Reduction and Growth Facility” loans disappear into the sand, for the most part? As Easterly shows, these programs are designed primarily to reflect the interests of the donors (“The Rich”) and their perceptions of what is best for the recipients (“The Rest”). Every few years, a G-8 summit of world leaders or a similar gathering declares a grand utopian “big push” to eradicate poverty in Africa or to provide universal access to water and sanitation or to accomplish a similar objective. The current Big Idea is the set of eight “Millennium Development Goals” for 2015, launched with great fanfare at the United Nations in September 2000. Because most of the goals are utopian, they not only fail, but they divert resources from activities that might actually do some good.

Problems are compounded because the donors’ cash is administered by “the Planners” (aid bureaucrats), who are largely unaccountable for results. Top-down goal setting and the planning mentality effectively shut out information about what is really needed on the ground and any useful feedback about why projects fail or, in rare circumstances, succeed. Compounding these inherent weaknesses of Rich largesse for the Rest, most of the poor countries have bad governments, wherein aid money is siphoned off to Swiss bank accounts, and corrupt officials sabotage the workings of rudimentary markets, increasing the cost of doing business and discouraging private investment.

What is needed, according to Easterly, are empowered “Searchers” on the ground—business or nonprofit entrepreneurs, for instance—who understand the needs of the poor and the institutions within which they live, who have tangible incentives to meet those needs, and who are encouraged to experiment on a small scale. A excellent example Easterly gives is the distribution of insecticide-treated bed nets in Malawi for protection against malaria.

The local office of a U.S nonprofit developed this program, which pays for itself. The nets are sold for fifty cents each to poor mothers through antenatal clinics in rural areas. The nurses get nine cents for each sale, which provides a tangible incentive for them to tout the nets to mothers and to keep them in stock. The nonprofit also sells nets for five dollars to richer Malawians, which subsidizes the fifty-cent sales. This model for distributing the nets has been shown to be significantly more effective than simply giving them away. Nearly everyone who buys a net uses it, whereas as many as 70 percent of the recipients who receive a free net do not bother to use it.

Despite his robust attacks on the foreign-aid mainstream and its institutional embodiments, such as the World Bank, Easterly suggests that there is room for modest interventions, particularly in such areas as public health (recall the success story about the mosquito nets). Such activity can be subject to an experimental quasi-market process whereby the potential aid recipients select the agency to deliver the assistance, perhaps through a voucher system. The spirit of Easterly’s approach is captured by his characterization of his own suggestion as possibly “the stupidest idea ever, except for all the ideas that have already failed in foreign aid” (p. 379).

Free markets work, Easterly emphasizes, but they cannot be imposed; to work effectively they need a supportive political and institutional environment, as any student of the former USSR or the U.S. health-care system can attest. For developing countries especially, the emergence of effective markets will be in “piecemeal, experimental steps.” To reinforce this point, Easterly highlights the World Bank’s “Doing Business” project, perhaps the most effective antipoverty initiative in its entire history, in my view.

The bank documented the time and cost of such activities as starting a business, getting credit, and enforcing contracts in 155 countries. It then constructed and published (with yearly updates) an index of the ease of doing business in each country, available on an extensive Web site (www.doingbusiness.org). The correlation between “ease of doing business” and income per capita is striking. By my reckoning, in 2005, the ten top-rated countries (headed by New Zealand) had an average annual income per capita of $37,300; the bottom ten (all but one in Africa) had an average of $370. Today, government ministers in dozens of countries are publicly striving to move up in the rankings—and are claiming credit when licenses are eliminated and nuisance taxes abolished, as I observed recently in Turkey. In other words, peer-group pressure generated by widespread publicity of such indices may be even more effective than trying, in effect, to bribe ministers to adopt sensible policies with nonsensical loans and grants.

Easterly’s points are enhanced by his historical perspective and a lucid pen, as well as by his substantial published research and time spent in developing countries. However, his thesis is muddied somewhat by an extended foray into political science and an attempt to evaluate the costs to the growth of developing countries incurred by British colonialism and U.S. Cold War interventions. In addition, his analysis gives insufficient attention to the not-infrequent occasions when major donors use multilateral lending and grants to reward friends and withhold them to discipline the recalcitrant. As some of the executive directors at the World Bank used to say to me, “The French look after West Africa, the British take care of India and East Africa, the U.S. watches after Latin America—and the Germans look after themselves.”

Easterly’s discussion of Japanese, Korean, and other East Asia growth successes, however, effectively underlines his central, operational conclusion: “Only the self-reliant efforts of poor people and poor societies themselves can end poverty, borrowing the ideas and institutions from the West when it suits them to do so” (pp. 382–83). In arriving at this conclusion, he joins a growing consensus that the major income differences between countries spring from country-specific policies that prevent or delay the adoption of new ideas and technology. As Stephen L. Parente and Edward C. Prescott put it in their capstone work on economic growth, “If the constraints that prevent firms in the poor countries from using readily available technologies and efficient work practices are eliminated, growth miracles will ensue, and the cross-country differences in income levels will be of the order of magnitude of regional differences within countries. . . . [T]here is no reason why the whole world should not be as rich as the leading industrial country” (Barriers to Riches [Cambridge, Mass.: MIT Press, 2000], pp. 141, 145]).

Or, as Adam Smith put it more succinctly in his lecture notes more than two hundred years ago, “[L]ittle else is required to carry a state to the highest degree of affluence from the lowest barbarism but peace, easy taxes, and a tolerable administration of justice; all the rest being brought about by the natural course of things” (qtd. in John Rae, Life of Adam Smith [New York: Augustus M. Kelley, (1895) 1965], p. 62). The great difficulty of achieving these three basic conditions in some places, however, tempts one to conclude that divine intervention may be needed.