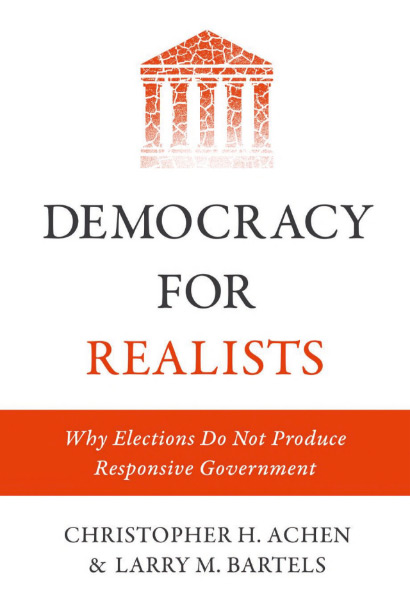 Democracy for Realists
Why Elections Do Not Produce Responsive Government
By Christopher H. Achen and Larry M. Bartels
Kindle Hardcover Paperback
This book review is a web exclusive for the Spring 2017 issue of The Independent Review.

Democracy for Realists focuses on electoral democracy, specifically in the United States, although authors Christopher Achen and Larry Bartels bring in material from other countries to support their argument when necessary. The authors set themselves what I frankly feared would be an overly ambitious task: “to contribute both to the improvement of democratic theory and to the improvement of democracy” (p. 13).

The first two-thirds of the book is a relentless cataloguing of failed ideas about democracy. Contrary to the heroic assumptions about voters made by proponents of what they call “the folk theory of democracy” (p. 1), voters are poorly informed, as Michael Delli Carpini and Scott Keeter documented in What Americans Know About Politics and Why It Matters (New Haven: Yale University Press, 1996). Anthony Downs (An Economic Theory of Democracy, New York: Harper and Row, 1957) gave the reason: voters are aware that their individual votes are quite unlikely to make any difference in the outcome; therefore, they have little incentive to educate themselves about candidates and policy platforms.

Still, optimists might suppose that voters don’t need to be well-informed: they can take cues from their better-informed friends, acquaintances, or family members. Or they can use heuristic devices: for example, after watching Gerald Ford try to eat a tamale without unwrapping it, Mexican-American voters might suppose that he didn’t understand or care about them. Unfortunately, these intellectual shortcuts work poorly, and Achen and Bartels report that votes cast by uninformed voters are systematically different from those cast by better-informed voters.

This systematic difference is important because it causes the so-called “miracle of aggregation” to fail. Numerous political scientists and commentators have observed that, if a large number of voters make random errors in judging which candidates will support their preferred policies, their votes will cancel each other out, and a smaller group of well-informed voters will be decisive. As long as both groups of voters have the same median policy preference, the “correct” candidate will be elected, and the uninformed median voter will get her preferred choice without exerting any great effort. But when the median preferences of these groups are different—and the research shows large differences—uninformed voting alters electoral outcomes.

In fact, it seems, voters’ preferences are not just hard to translate into electoral choices: the preferences themselves may be unknowable. To learn about preferences, social scientists ask survey questions, but the way the questions are framed changes the way people answer them. Achens and Bartels cite experimental evidence from the 1970s in which about half of the participants “would ‘not allow’ a communist to give a speech, but only about one-fourth said they would ‘forbid’ him from doing so.” Before the 1991 Gulf War, “almost two-thirds of Americans were willing to ‘use military force,’ but fewer than half were willing to ‘engage in combat,’ and fewer than 30% were willing to ‘go to war’” (p. 31). Political entrepreneurs are aware of these framing effects, as Deborah Stone (Policy Paradox and Political Reason, New York: Harper Collins, 1988) reports, and they use popular symbols and other forms of political speech to create consensus around their favored positions.

Retrospective voting is a popular idea that places different cognitive demands on voters: rather than evaluating candidates’ characters and policy positions and comparing them to their own preferences, retrospective voters need to monitor the performance of elected officials and vote bad performers out of office. Here, Achens and Bartels cite a large body of evidence showing that voters are unable to sensibly assess the degree to which elected officials are responsible for favorable or unfavorable developments. Their own research, for example, shows that people vote retrospectively in the sense that they take economic conditions into account when voting. But they greatly overweight economic conditions immediately before elections, and politicians know they do, so there is a temptation, sometimes acted on, for incumbents to stimulate economic growth just prior to an election. More whimsically, Achens and Bartels show that New Jersey voters in the 1916 presidential election (probably mistakenly!) held Woodrow Wilson accountable for a series of shark attacks along the New Jersey coast.

The last failed idea about democracy that Achen and Bartels debunk places less emphasis on elections and electoral outcomes. A large literature claims that political “deliberation” has an importance quite apart from any instrumental value it may have: citizen participation in patient, rational, public debate satisfies deep yearnings. And so it might, for the authors of this literature, but not for most people. Achens and Bartels have recourse here to a wonderful quotation from E. E. Schattschneider (Party Government, New York: Holt, Rinehart, and Winston, 1942, p. 131): deliberation theorists “try to whip the public into doing things it does not want to do, is unable to do, and has too much sense to do.”

In the last third of their book, Achen and Bartels discuss a theory of democracy that better withstands scrutiny but nonetheless has disquieting implications. As the framers of the U.S. constitution were well aware, people are prone to faction: in the language of Carl Schmitt (The Concept of the Political, Chicago: University of Chicago Press, 1996[1932]), it is deeply satisfying to make friend-enemy distinctions, and almost any pretext will serve for this purpose. Of course, deeply felt identities better serve the purpose of sorting people into groups of us and them: racial, gender, ethnic, and religious groupings come quickly to mind, but occupational and partisan identities can be deeply felt as well.

At this point, Achens and Bartels make a key methodological point, and one that suggests to me that much voting research will need to be redone in light of it. Membership in a group does not amount to an “identity” for all members of the group. For example, “some Catholics have a purely nominal attachment to the denomination. Others think of it as central to who they are, so that a disparaging remark is an attack on them. The latter group have a Catholic identity” (p. 228). However, even though they know that identity is important, few political scientists measure it; instead assuming that membership in a group is equivalent to an identity. In practice, many political scientists include group membership variables in their regressions, but they seldom measure intensity of identification with these groups.

For people with deeply-felt group identifications, identities “are emotional attachments that transcend thinking” (p. 228). Partisanship, a particular type of group identity, typically reflects “judgments about where ‘people like me’ belong” (p. 264) and, like religious identification, partisan identities are often passed from parents to children. This much may be familiar to readers of Democracy for Realists. But then Achen and Bartels cite research by Warren Miller (“Temporal Order and Causal Interference,” Political Analysis 8: 119-140) and Paul Goren (“Party Identification and Core Political Values,” American Journal of Political Science 49: 882-897) to make a counterintuitive point: ideology is more often derivative of partisanship, not its cause. So partisan attachments are formed in the family or within other groups, and most people then adopt the views of their party’s leaders or prominent members. This is the “polarization effect” identified by John Zaller (The Nature and Order of Mass Opinion, New York: Cambridge University Press, 1992).

In summing up their evidence on the cognitive biases of voters, Achens and Bartels emphasize that all voters routinely make mental errors, and that “all” includes “the authors of this book and its readers” (p. 311). Despite pervasive cognitive biases among voters, the authors sensibly argue that electoral democracy serves some useful functions. For example, elections provide a way of deciding who should rule that is widely perceived to be legitimate. Turnover of candidates and parties in public office, even random turnover, prevents them from entrenching themselves in power. And because current officeholders know that their tenure will be limited, they have an incentive to tolerate opposition. Finally, the need to stand for reelection probably deters official gross misconduct and gross negligence: as Amartya Sen famously asserted in Development as Freedom (New York: Random House, 1999, p. 16), “no famine has ever taken place in the history of the world in a functioning democracy.”

In the final four pages of their book, Achen and Bartels present their ideas for bringing about a “truer and deeper” democracy (p. 325). They say that “few established democracies do as little as the United States to limit the distorting effects of money in the democratic process” (p. 326), and they express a belief that greater social and economic equality would promote more effective democracy. Here, they seem to have in mind not only the effect of wealth and social status on electoral outcomes but also on the outcomes of political bargaining that takes place between elections.

These suggestions don’t appear to be grounded in the material presented in the rest of their book, and they seem to me to miss an important point. The earlier part of the book shows that cognitive biases in voting behavior are nearly ubiquitous. In contrast, as the authors acknowledge, the rational choice model works well in the marketplace, where people bear the cost of their choices. This suggests that voting choices lack the normative significance that market choices have (Geoffrey Brennan and Loren Lomasky, Democracy and Decision: The Pure Theory of Electoral Preference, New York: Cambridge University Press, 1993). Proposals for reform that don’t address this issue, like the ones that Achen and Bartels advance at the end of their book, won’t make voting a better way to aggregate individual preferences.

In my view then, Achen and Bartels fall short of achieving the second part of the task they set themselves at the outset. This need not depreciate the value of their book: they do an especially fine job with their analyses of retrospective voting and identity politics, making a noteworthy contribution to the theory of voting behavior, and their book would be a good choice for undergraduate or graduate courses as an introduction to the political science literature on voting behavior.