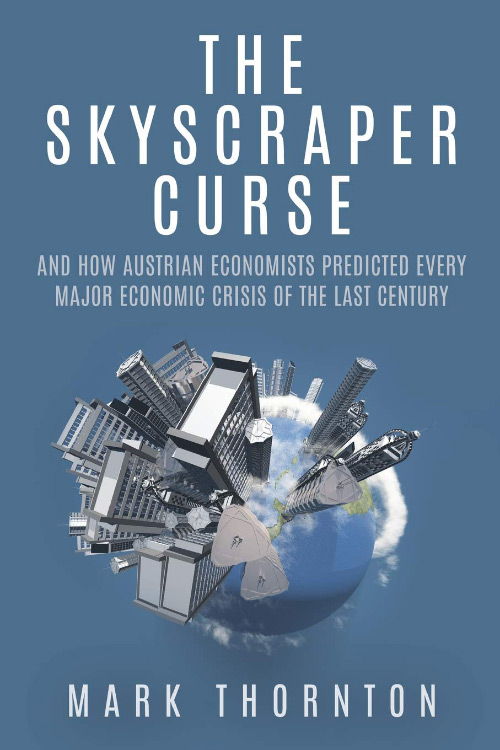 The Skyscraper Curse
And How Austrian Economists Predicted Every Major Economic Crisis of the Last Century
Mark Thornton
Kindle Paperback Audiobook
This book review appeared in the Winter 2019/20 issue of The Independent Review.

Despite the apparent simplicity of this broad interpretation of the ABCT, the finer details can be somewhat elusive. For example, why does production become more roundabout at lower interest rates? Why are firms and entrepreneurs systematically fooled by artificially low interest rates? How might one measure production’s degree of roundaboutness? To what extent is evidence of the ABCT just ex post overfitting?

The strength of The Skyscraper Curse is Mark Thornton’s ability to provide an answer to some of these questions using a unique approach. In the late 1990s, an investment analyst by the name of Andrew Lawrence developed something called the Skyscraper Index. According to Lawrence, the construction of the world’s tallest skyscraper tends not only to coincide with economic booms but also to be a predictor of subsequent economic crises. Certainly, it is not the actual construction that is causing these economic crises. Nonetheless, the premise of Thornton’s book is that this socalled Skyscraper Curse is actually emblematic of the dynamics of the ABCT, and the usefulness of the index might be due to this relation to the ABCT.

In part 1 of the book, Thornton explains the Skyscraper Index and even extends the index beyond the evidence provided by Lawrence. He then explains the ABCT and how it relates to the Skyscraper Index. In doing so, he highlights a number of the key features of the theory in plain language. He discusses how artificially low interest rates lead to more-roundabout methods of production and why monetary expansion translates into relative price changes. His discussion of the process by which artificially low interest rates can explain the Skyscraper Curse is a particularly good and practical example of the ABCT at work. He details how low interest rates increase the present discounted value of investment projects and reduce the cost of capital for firms. The lower cost of capital encourages firms to expand to try to capitalize on economies of scale. In addition, the lower interest rates increase the present discounted value of the flow of services from land. The price of land rises in response. Not only that, but the higher price of land encourages building vertically rather than horizontally because the per floor cost of building the taller building is lower. In the construction of taller buildings, production is necessarily more roundabout because taller buildings create problems and issues that would be absent from the construction of smaller buildings. In working through this example, Thornton provides both a clear exposition of the ABCT and its relationship with the Skyscraper Curse. Overall, this discussion represents a unique, insightful, and practical look at the ABCT. In fact, even viewing the Skyscraper Curse exclusively as a storytelling device has value; that is, even those who are not advocates of the ABCT or otherwise skeptical will still find value in the explanation of it presented in this unique context.

If the book’s content were limited to part 1, I think that it would make a great supplemental reader to a more thorough and formal treatment of the ABCT, such as that found in F. A. Hayek’s Prices & Production (see Prices & Production and Other Works: On Money, the Business Cycle, and the Gold Standard, ed. Joseph Salerno [Auburn, Ala.: Ludwig von Mises Institute, 2012]). However, there are other aspects of the book that I cannot recommend as highly.

Some of the book suffers from the “one true model” argument in the sense that its argument is designed to present the ABCT as the only plausible explanation of certain events even when other plausible explanations do exist. The chapter on the Great Depression is an example. In this chapter, Thornton points out that Austrian economists such as Ludwig von Mises and Hayek predicted the Great Depression, whereas mainstream economists such as Irving Fisher did not. Fisher is meant to serve as a standin for mainstream economists. Although it is certainly true that Fisher was a mainstream economist, it is unclear how representative Fisher is of the mainstream as a whole. This point is particularly important because other economists, such as Gustav Cassel and Ralph Hawtrey, warned of the dangers of restoring the gold standard without sufficient international coordination (see, for example, Ronald W. Batchelder and David Glasner, Pre-Keynesian Monetary Theories of the Great Depression: What Ever Happened to Hawtrey and Cassel? April 30, 2013. The subsequent gold-price-approach of scholars such as David Glasner (Free Banking and Monetary Reform [Cambridge: Cambridge University Press, 1989]) and Scott Sumner (The Midas Paradox: Financial Markets, Government Policy Shocks, and the Great Depression [Oakland, Calif.: Independent Institute, 2015]) extends and provides empirical evidence for a Cassel-Hawtrey-type explanation of the Depression. Furthermore, Thornton’s discussion lacks any reference to the closed-economy nature of the Austrian explanation of the worldwide Depression.

Of course, Thornton can be forgiven for not discussing every detail of the Great Depression; after all, others have devoted entire books to such explanations. However, the chapter on the 1970s demonstrates a similar pattern of choosing economists who were wrong as a point of comparison. This chapter focuses on a contrast between Keynesians, who thought the economy could be fine-tuned, and Austrian economists. The Monetarist Counterrevolution similarly rejected Keynesian fine-tuning and also had an explanation for stagflation, but they are neglected in the discussion.

Thornton’s policy conclusion is that we should end the Federal Reserve and establish a 100 percent gold-reserve currency. Reasonable people can argue about the Fed’s historical performance. However, Thornton’s claim is an odd one within the context of a discussion of the Skyscraper Curse. In the book, Thornton expands the Skyscraper Index to include skyscrapers built as early as the 1880s. The Federal Reserve did not appear until 1914, and half of the skyscrapers referenced by Thornton’s updated index were built before this time. To be fair, Thornton acknowledges this point in the text but never gives a sufficient explanation of the causes of pre-Fed business cycles. He simply makes reference to fractional reserve banking and the National Banking Acts.

Finally, Thornton makes the argument that Austrians have an explanation of business cycles, whereas mainstream economists do not. To explain the business cycle, mainstream business-cycle theory has to appeal instead to unexpected “shocks” to the economy. This argument sounds pretty damning in isolation. However, what Thornton is referring to is that mainstream models assume that individuals have rational expectations. The rational-expectations assumption is simply an assumption that individuals and firms do not make systematic errors. As a result, the sources of business cycles are unexpected changes in preferences, the money supply (or the interest rate), technology, and so on. The dynamics of the model determine the response to and significance of these shocks. In making this critique, Thornton reveals that the Austrian theory has never fully come to grips with the rational-expectations assumption. In an age when central banks make announcements about changes in policy and provide forward guidance, how are firms and entrepreneurs systematically fooled by policy makers manipulating interest rates? How many times do firms and entrepreneurs have to erroneously adopt more-roundabout methods of production before greater caution is exercised? Unlike many, I don’t think this is a fatal flaw in the ABCT. In fact, I have published papers with Austrian conclusions that start with the assumption of rational expectations (judging by the citation counts, perhaps not convincingly so). Nonetheless, Thornton’s discussion of this issue is confined to approximately one page with a lengthy footnote and a few scattered references in the text.

The bottom line is that this book is a useful exposition of the ABCT with a sufficiently strong hook to make it worthwhile, interesting, and unique. I only wish the author had been more fair to non-Austrian viewpoints. The book would not have suffered if he had done so.

Joshua R. Hendrickson
University of Mississippi
Banking and FinanceEconomic History and DevelopmentEconomic PolicyEconomy
Subscribe Buy This Issue Get the App