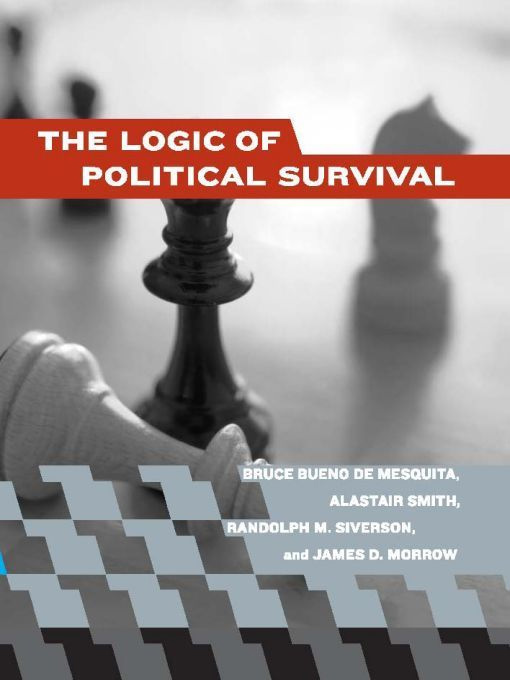 Because leaders’ political survival depends on their followers’ support, we might expect that leaders who are more successful in bringing peace and prosperity to their nations will remain in power longer, yet the opposite appears to be true. Democratic governments appear to offer their citizens more peace and prosperity than autocracies do, but autocratic leaders stay in office roughly twice as long as leaders in democratic nations. One of the conclusions of The Logic of Political Survival is that in many cases good policies are detrimental to political survival, whereas bad policies often enhance political survival.

The large winning coalitions found in democracies are therefore more conducive to policies that foster economic growth and make everyone better off, but they generate weaker loyalties to leaders and hence work against political survival. Bad economic policies are not irrational from the standpoint of political leaders who implement them; rather, they are what is required for political survival in political systems that have small winning coalitions. When the welfare of leaders and the welfare of the citizens require different policies, as they often do, policies are more likely to favor the leaders than their citizens.

Leaders are loyal to their coalition members by promising them a stream of permanent future benefits. If coalition members thought their benefits would continue only for the short term, they would have an incentive to defect to a challenger’s coalition. Similarly, coalition members are loyal to their leader because they are assured of retaining the benefits of coalition membership as long as the leader remains in power. Leaders have an incentive to maintain small winning coalitions because it is then less costly to provide the concentrated benefits that produce loyal followers. However, political institutions may require larger coalitions to maintain power, and democratic governments in particular require large winning coalitions, which in turn tend to produce policies that generate more public goods and that are better for citizens. Democratic leaders do not necessarily want to produce better public policies, the authors emphasize; rather, democratic political institutions provide incentives for leaders to pursue policies that are more in the public interest than would be the case with autocratic governments.

A smaller winning coalition enhances the leaders’ ability to install a kleptocracy—a political system in which leaders steal from the state for their own benefit—because fewer coalition members must be paid off, leaving more for the leader. Democracies, which require large winning coalitions, must spend more to maintain their supporters’ loyalties; hence, they leave less for the leaders themselves and reduce the opportunity for kleptocracy. Again, institutions matter, and democratic institutions that require a large winning coalition help to reduce corruption and lay the foundation for economic prosperity.

In any form of government, political survival is tenuous when leaders lack the resources to maintain the support of essential backers. Political survival is threatened by misallocations of funds. Inefficiencies mean less is available for supporters, so financial crises can lead to political crises. The authors criticize institutions such as the World Bank and the International Monetary Fund for bailing out governments facing financial crises because by so doing they are hindering political reform and helping to keep corrupt or incompetent leaders in office.

One of the book’s most consistent messages is that for governments that rely on a small winning coalition to maintain the leader’s status, good policies are bad politics, and bad policy is good politics. The opposite tends to be true of governments that rely on large winning coalitions. However, leaders with small coalitions and large selectorates remain in office the longest because their supporters have stronger loyalties and much to lose if the leader is replaced. The book goes well beyond this basic model to discuss war, revolution, coups, antigovernment demonstrations and protests, the effects of foreign aid, and other topics. These extensions of the basic model make the authors’ theories look very general, although sometimes it appears that they are trying to explain after the fact why historical political events are consistent with their model, rather than logically deducing conclusions from the model. Still, their analysis is persuasive.

The Logic of Political Survival is a rigorous academic treatise that lays out its theory in a formal mathematical framework, examines its propositions through statistical testing, and offers many historical case studies to support its arguments. The case studies also make the book more interesting to read. The statistical evidence supports the authors’ theory that the sizes of the selectorate and of the winning coalition determine political outcomes, rather than the alternative theory that democracy by itself is the determining factor. The statistical work was a challenge for the authors because of some problems in defining political variables, and it is subject to some questions of interpretation; it holds up well overall, however, and adds some heft to the book’s thesis. The authors also take into account and build on a substantial academic literature in public choice and political economy, and the book includes a long list of references.

The Logic of Political Survival is an ambitious book, and the authors succeed for the most part in developing and defending their theory of political survival. The book fits in well with the existing literature on public choice, and it advances that discipline by providing explanations for political phenomena that are not well explained in the previous literature. One can always make minor complaints about any effort this ambitious, but the authors are persuasive overall, and the book represents a substantial contribution to the field of political economy. Readers should be forewarned that it is a serious academic treatise, not light reading, but those who make the effort will be rewarded with a deeper understanding of political behavior.