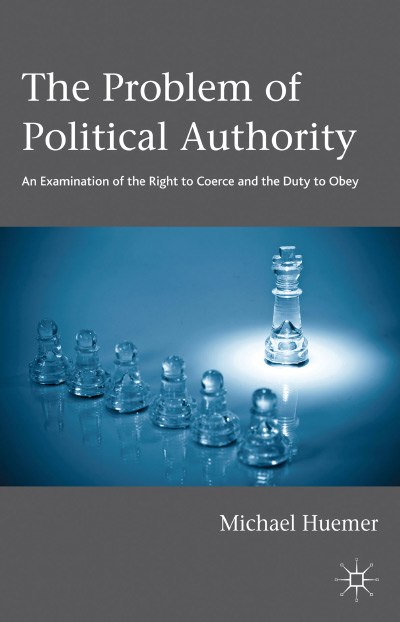 The Problem of Political Authority
An Examination of the Right to Coerce and the Duty to Obey
Michael Huemer
Kindle Hardcover Paperback
This book review appeared in the Summer 2014 issue of The Independent Review.

As the title The Problem of Political Authority suggests, a central issue in political philosophy is the nature and justification of the authority of the state. States claim to have authority, and this authority is simultaneously the basis for the individual’s duty to obey the state and, should we be remiss in this duty, the state’s right to coerce. But where does this authority come from? Long ago, one might have grounded the authority of the state—or more precisely, the monarch—in raw power or the divine will. Few today would defend the notion that we all by nature owe allegiance to a divinely appointed sovereign, whose power is an expression of God’s law. Modern alternatives that many people do take seriously include the idea that a democratic state gets its authority from the whole of the people and the idea that we can hypothetically be presumed to consent to authority as an expression of the “social contract.” What if these arguments don’t work? One possibility is that states actually don’t have the authority they claim. In that case, the only justification for state coercion would be that the social order itself is impossible otherwise.

Michael Huemer argues in his new book that indeed the modern arguments for political authority fail and, furthermore, that society will work just fine without state coercion. Hence, there is no duty on persons to obey the law and no right of the state to coerce. Huemer thus joins the ranks of twenty-first-century philosophical defenders of an anarchist position that is rooted in a conception of the efficacy of voluntary and competitive institutions (see, for example, Gerard Casey, Libertarian Anarchy [London: Continuum Books, 2012]; Gary Chartier, Anarchy and Legal Order [Cambridge, U.K.: Cambridge University Press, 2013]; and Aeon J. Skoble, Deleting the State [Chicago: Open Court, 2008]). He argues that if we begin from commonly held and relatively uncontroversial moral claims, we will arrive at his uncommon and controversial conclusion. He announces early on that his argument is not based on a comprehensive moral or political theory such as utilitarianism or Kantian deontology or Rawlsian social contract theory. According to Huemer, “One who hopes to make progress [in political philosophy] cannot begin from a contentious moral theory, still less from a contentious political ideology” (p. 15). This puts him in the interesting, and in my view correct, position that although most people’s widely shared moral beliefs are correct (stealing and killing are bad; keep your promises), most people’s widely shared political beliefs are mistaken (laws have authority because they are laws; some states are legitimate).

Huemer devotes the first part of the book to the question of whether government is justified—or, more precisely, whether government can have special rights that ordinary persons lack or whether persons have special duties to government that they do not have to others. The second part of the book is concerned with the consequences of recognizing that the answer to the first question is “no”—whether society can actually function without government. To argue against the justification for authority, Huemer shows how several common strategies fail: social contract theory, democratic theory, consequentialism, and fairness. Each in turn is shown to appeal to some aspect of our moral intuitions, but then to overlook some equally important facet of those intuitions. For example, he argues that we cannot derive a theory of political obligation from majority-rule democracy. Democratic sensibilities will produce a need to respect other people’s judgments, but not a right of majorities to impose their judgments on unwilling persons by force. The inference from the former to the latter, Huemer argues, is a sleight of hand: deliberating, for example, can’t by itself be a rationale for negating prima facie rights. Treating others as equals can’t by itself be a rationale for majorities coercing minorities. Indeed, one might argue that democratic respect for the equality of all persons necessarily excludes majoritarian coercion of minorities. Similarly, Huemer shows that consequentialist or fairnessbased arguments for coercion either prove too much or skip a step. One of the most prevalent rationales for political obligation is social contract theory, and Huemer shows that it too fails. He argues that the central idea of social contract theory is a good one—our interactions should be voluntary—but that “subjection to government is obviously not voluntary” (p. 35). The laws are imposed whether one has consented or not, and there are no reasonable means for opting out. Some defenders of the social contract approach try to work around this objection by recasting it as a hypothetical contract: although you didn’t actually consent, a rational person would consent, and so again the state’s right to coerce is legitimate. This recasting, Huemer argues, does not work either. He shows that there is no good reason to think that all would agree to any particular set of commands, even under hypothetical deliberation conditions such as those postulated by the influential philosopher John Rawls. But even if there were, Huemer says, it still wouldn’t warrant the conclusion about the justification of coercion: “the mere unreasonableness of someone’s rejecting an arrangement does not typically render it morally permissible to coerce that person into accepting the arrangement” (p. 57). Here we see a representative example of Huemer’s approach—common sense and widely held moral beliefs about the wrongness of this rationale for coercion are taken to be overridden because it is the state doing the coercing, yet this is supposed to be a rationale for the justification of the state. Hence, such arguments for the state’s authority are question begging, in addition to having the other flaws Huemer notes.

In the second part of the book, Huemer responds to a different set of concerns. Even if we take it as granted that the state lacks authority and is not morally justified, if the results of not having a state were catastrophic, then we would need one anyway. If social living were literally impossible without the state, then the anarchist argument would be undercut. So Huemer’s next task is to show that society can function perfectly well without the state. Again, he appeals to commonly held moral beliefs that do not depend on sophisticated moral theory—for example, popular notions that violence, stealing, and lying are morally wrong. He then outlines how basic security would be obtained in a free society—readers of this journal will be familiar with the idea of private, competing agencies that offer protective services and of disputes being arbitrated by competitive dispute-resolution firms (see, for example, Edward Stringham, ed., Anarchy and the Law [Oakland, Calif.: The Independent Institute, 2007]). Such firms depend for their viability on actual success at preventing and resolving conflicts rather than on political patronage and the coercion that entails. He also addresses concerns about the degree to which market institutions can serve and protect the poor, and he shows that “privatization” of dispute-resolution and protective services not only has lower costs and higher levels of service but also avoids predictable pitfalls of government-run systems.

There’s a school of thought that argues that even if all of the above is correct, we would still need a state to prevent foreign attack because only a state can wage war. Huemer also takes up this concern, arguing that an anarchist society has perfectly plausible means for collectively defending itself against invaders, but that being a peaceful and decentralized society makes war less likely to begin with. He claims, not implausibly, that keeping a large standing army with global reach actually makes it more likely that the society will engage in unwarranted aggression, which is the sort of thing that provokes reprisals.

Huemer concludes on a note of optimism: a claim that his project is not utopian and that we can actually hope to achieve the free society. He argues that abolition of government is actually more realistic than reforming it, on the grounds that the latter requires people to know a lot about complicated matters, whereas the former requires only skepticism of authority. He says the only thing standing in the way is public opinion and inertia. Unfortunately, these obstacles are huge, and I fear that they are harder to overcome than Huemer thinks. Nevertheless, his thesis is correct: states do not have authority and lack the right to coerce, and society can get along perfectly well, if not better, without them. His arguments are sound and elegantly presented. Perhaps if the book is widely read and discussed, his final prediction might have a chance of being correct also.