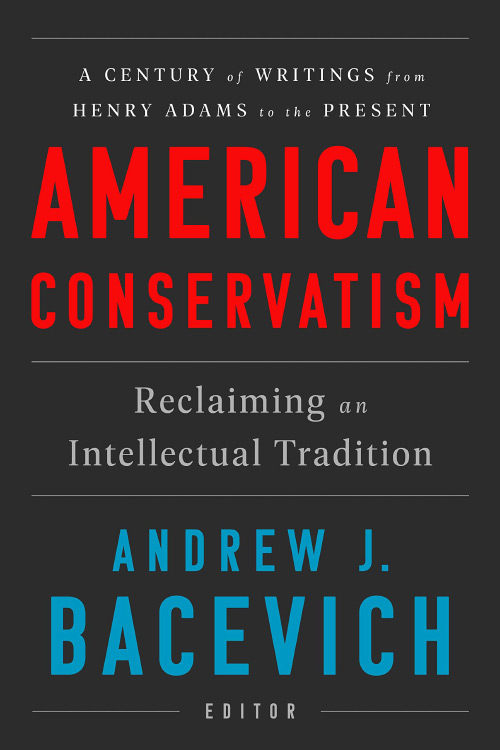 American Conservatism
Reclaiming an Intellectual Tradition
Edited by Andrew J. Bacevich
Kindle Hardcover
This book review is a web exclusive for the Winter 2020/21 issue of The Independent Review.

The essays and book chapters in this collection provide a survey of American critiques of modernity spanning the twentieth and into the present century. Forty-four selections are included, along with editor Andrew Bacevich’s introduction. By the dawn of the twentieth century in America, modernity was manifested in centralization, large scale and concentrated power in business and government, and incessant change. These were intended effects of the Progressive intellectual and moral programs in legislative and judicial matters. “Social control” was a mantra of the progressives. The Progressive vision was to bring scientifically guided planning into every corner of society, from the business cycle to management and regulation of business and industry, to education, and even to family life. In government as well as business and industry, it was presumed that large scale and centralization were sources of efficiency. And it was presumed that trained experts should be in control of social, economic, and governmental institutions. In education, classical learning in the humanities gave way to training in modern scientific, engineering, and management techniques.

Conservative critics of progressivism and modernity represented in American Conservatism range from familiar conservatives such as Russell Kirk, William F. Buckley and Herbert Hoover; to mostly forgotten figures such as John T. Flynn and William Pfaff; to critics of modernism who are well-known, but not often associated with conservatism, such as Charles Beard, Reinhold Niebuhr, and Zora Neale Hurston.

The readings are organized into five sections: (1) First Principles: Three Responses; (2) The Fundamentals: Tradition, Religion, Morality, and the Individual; (3) Liberty and Power: The State and the Free Market; (4) The Ties that Bind: The Local and Familiar; and (5) The Exceptional Nation: America and the World.

Section (1) is the smallest, with three essays on principles of conservatism by Russell Kirk, William F. Buckley, Jr., and Frank S. Meyer. Section (2) is the largest, with twenty-one selections. Section (2) and the remainder of the collection are arranged chronologically within sections. Section (2) opens with Henry Adams pondering the metaphysics of modern technology in “The Dynamo and the Virgin” (1900). It concludes with Antonin Scalia’s dissent in Obergefell v. Hodges (2015). Obergefell was the Supreme Court decision that overruled state restrictions of marriage to a man and woman. In between the Adams and Scalia readings are essays by philosophers, historians, journalists, theologians and others.

Section (3) includes libertarian-oriented entries by economists Milton Friedman (1962) and Murray Rothbard (1973), by turn-of-the-century journalist Randolph Bourne (1918), and Albert Jay Nock (1935). These are paired with a critique of creeping socialism by John T. Flynn (1949). On the traditional conservative side there are critiques of the materialism and superficiality of liberal consumer culture by Richard Weaver (1948) and Irving Kristol (1970), and Patrick Deneen’s First Things article “Unsustainable Liberalism” (2012). Deneen’s essay was the core of his postmortem on liberalism, Why Liberalism Failed (New Haven: Yale University Press, 2018).

A brief section (4) comprises four entries with a focus mainly on the transition of the culture of the South from agrarian to industrial, individual, and commercial. These are by John Crowe Ransom (1930), Robert Nisbet (1953), Eugene Genovese (1993), and Wendell Berry (2005).

In section (5) the focus is on U.S. foreign policy. Entries include Henry Cabot Lodge’s 1919 speech to the U.S. Senate opposing U.S. entry into the League of Nations, and critiques of American foreign entanglements by Charles Beard (1939), Robert A. Taft (1951), Reinhold Niebuhr (1952), and William Pfaff (2010). These isolationist-leaning entries are balanced by Ronald Reagan’s 1982 address to the British Parliament urging steadfastness in the face of Soviet expansionist threats, and a selection from James Burnham’s The Struggle for the World (1947). The opening piece in this section on America and the world is a speech Theodore Roosevelt delivered in Chicago in 1899 on the importance of leading a strenuous life, both individually and as a nation.

As others have noted, American conservatism does not lend itself to a tidy definition, leaving it difficult to identify conservative persons or arguments. The ambiguous borders of conservatism contain a variety of views on a variety of matters—community, economy, foreign and military policy, and religion, for instance. Bacevich suggests that “conservatism is more akin to an ethos or a disposition than to a fixed ideology” (xviii). He does however list six markers of contemporary conservatism. These are as follows:

Many of the threads woven through the tapestry of American conservative thought are represented in this collection. But as Bacevich notes, his collection, like any other, reflects the editor’s particular concerns and prejudices. Two of these stand out. Bacevich tells readers that he “excluded altogether anyone associated with what in the last quarter of the twentieth century became known as neoconservatism” (xx). He regards neoconservatism as “a heresy akin to antinomianism, its adherents declaring themselves unbound by the constraints to which others are obligated to attend” (xx).

He also excludes supporters of President Trump. Not only that, but he is openly disdainful of Trump and his supporters.

Donald Trump is not a conservative. Nor are the leaders of the Republican Party over which Trump presides. . . . Indeed, allowing Trump, [Mitch] McConnell, Sean Hannity, Laura Ingraham, Rush Limbaugh et al. to present themselves as exemplary conservatives testifies to the pervasive corruption of contemporary American political discourse (xiv).

So Bacevich’s intent with this book appears to be as much or more so to rescue true conservativism from heretics and counterfeits, as to offer a conservative alternative to leftist progressivism. But his introduction offers little in the way of argument in support of dismissing neoconservatives and supporters of Trump. Bacevich’s articles for The American Conservative fill in this lacuna. He regards both the George W. Bush and Trump presidencies as disasters. The nature of the disaster is indicated by his suggestions for how the Republican Party can redeem itself after Trump (and Bush). In an October 5, 2020 article Bacevich argued that the steps would be:

First, clip the wings of the commander-in-chief. Promote legislation that prohibits U.S. military action abroad without prior congressional assent. No more presidential wars of choice. No more regime change.


Second, curb runaway military spending. Refuse to indulge the bizarre proposition that equates national security with the amount of money shoveled annually to the Pentagon.

Third, bring the military-industrial complex to heel. Put a lock on the revolving door between arms manufacturers and the national security establishment. Support radical campaign finance reform to prohibit defense contractors from buying members of Congress as they have been regularly doing ever since Ike called attention to the practice.

Fourth, demand fiscal discipline. This was once a bedrock Republican principle. Restore it. Saddling future generations with massive debt is an outrage and a sin. Say so loudly and repeatedly. Mean it this time.

Bacevich’s tilt toward isolationism revealed in The American Conservative article is reflected in the imbalance of entries for section (5), “The Exceptional Nation: America and the World.” Five of the entries, by Lodge, Beard, Taft, Niebuhr, and Pfaff oppose American entanglements abroad, with only two on the other side, by Burnham and Reagan. One might expect that the Theodore Roosevelt entry would be on the side of his muscular foreign policy, but his entry on “The Strenuous Life” is not concerned with foreign or military policy.

Bacevich’s antipathy to neoconservatives and to Donald Trump prevents this collection from being as representative of American conservativism and as useful as it might have been. It also prevents the collection from reflecting Bacevich’s six markers of contemporary conservatism. None of the six markers have to do with foreign and military policy, which is the focus of section (5).

Neoconservatism is more than muscular foreign policy to save the world for democracy. Neoconservatism is defined by John Ehrman in a prominent encyclopedia of American conservatism (American Conservatism: An Encyclopedia. Wilmington, Del.: ISI Books, 2006. pp. 610-11) as firstly, “a right-wing branch of American liberalism that emerged in the late 1960s and early 1970s, largely as a reaction to liberal utopianism and the irrationality of the new Left.” Secondly, “in foreign affairs, neoconservatives have consistently advocated strongly internationalist policies to contain communism and promote democracy abroad.” If today’s Democratic Party has its ideological roots in the utopianism of the New Left, which it certainly seems to, then neoconservative critiques of the New Left deserve a place in this collection. Indeed, there are entries by prominent neoconservatives Irving Kristol, Richard John Neuhaus, and Michael Novak. Kristol is widely regarded as the father of neoconservativism. So despite his claim to have excluded neoconservatives, it is only neoconservative thought on foreign policy that he excludes. It would have been helpful in this regard if Bacevich had been more careful in identifying the lines separating those he considers heretics from true conservatives.

His hostility to Trump rules out the possibility for readers to use this collection to answer the question—in what ways if at all was the Trump presidency conservative? One thing that has become clear over the past four years is that abortion and other moral issues such as physician-assisted suicide, euthanasia, and same sex marriage are what now separate conservatives from liberal progressive Americans. On these essential issues, which are at the core of three of Bacevich’s six markers of conservatism listed above, Donald Trump is the standard bearer for contemporary American conservatism.