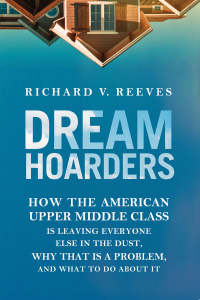 Dream Hoarders
How the American Upper Middle Class is Leaving Everyone Else in the Dust, Why That is a Problem, and What to Do about It
By Richard V. Reeves
Kindle Hardcover Paperback Audiobook MP3 CD
This book review is a web exclusive for the Spring 2018 issue of The Independent Review.

The American labor market “does a good job of rewarding the kind of ‘merit’ that adds economic value—skills, knowledge, intelligence” (p. 75). “The idea of moving away from a market economy is foolish as well as far-fetched. Markets increase prosperity, reduce poverty, enhance well-being, and bolster individual choice” (p. 77). These aren’t the words of someone from Cato, the AEI or the Heritage Foundation, but from Richard Reeves, a senior fellow in Economic Studies at the Brookings Institution. But, warns Reeves, this “meritocratic market” is embedded in an unfair society. Meritocracy is great for adults, but not for children. The problem is that upper middle class parents have built a system that gives their own children massive advantages—they hoard the prerequisites for the American dream and block the children of others from flourishing.

Market merit is a great thing, but we need to reform our social institutions so that they “aggressively equalize opportunities to develop market merit” (p. 84). “The problem is not that society is too competitive. It is that it is not competitive enough, partly because of ... anticompetitive opportunity hoarding ... but mostly because the chances to prepare for the competition are so unequal” (p. 124). Reeves seems to realize that it would be exceptionally difficult (and probably quite destructive) to eliminate all the advantages that children of successful parents have over other children. These advantages include having caring parents (two of them, not just one), who are good role models and spend time simply talking to their children—one study he cites examines the “conversation gap” and estimates that children in families on welfare hear about six hundred words per hours, working-class children about twelve hundred words per hour, and children of professionals about twenty-one hundred words per hour. Reeves doesn’t aim to undo these immense advantages. Rather, he takes aim at a higher level—at legal rules and institutional arrangements, constructed by the upper middle class to make life better for themselves and their children without considering the potential harm imposed on others—and suggests that we could use “more downward mobility from the top” (p. 58).

So, how do upper middle class professionals—“journalists, scholars, technocrats, managers, bureaucrats, the people with letters after their names” (p. 4) hoard the dream? Reeves focuses on three tactics—exclusionary zoning, college admissions policies, and the allocation of good internships. The most important of these is the first. The upper middle class have segregated themselves into towns and neighborhoods where the cost of living is high, mainly by using zoning rules that make it impossible for poorer people to be their neighbors and enjoy these communities’ amenities—especially good schools. The rich practice an “inverse ghettoization” (p. 102)—building enclaves where they live healthy, safe lives together and don’t have to deal with the annoyances of non-elites and their children, to the detriment of everyone else, argues Reeves. These zoning practices—such as banning multi-family dwellings and setting high minimum lot sizes—mean that those outside the top groups cannot afford to live in the most economically prosperous places. And the dirty secret is that these zoning requirements are stricter in cities with more left-of-center voters. Enrico Moretti and Chang-Tai Hsieh have estimated that if only San Francisco, San Jose and New York adopted zoning regulations of the median American city, the entire U.S. economy would be 10 percent larger because more people would be able to afford to move to opportunity.

The problem with higher education, as Reeves sees it, is that the game is rigged so that children of the upper middle class have huge advantages in getting into the best colleges and universities—because they live near the best high schools and because, for example, their parents have the wherewithal to spend money on college admissions consultants (who can charge over $10,000 for their top tier of services). “Post-secondary education ... has become an ‘inequality machine” (p. 11), as it “takes the inequality given to it and magnifies it” (p. 55). Elite schools pay lip services to serving all of society, but they are “locked into an equilibrium that militates against serious reform efforts” as it “is simply not in the interests of the most powerful institutions to change things very much” (p. 88-89). Reeves offers a tantalizing sentence or two about supply-side reforms to improve opportunity and access to higher education but doesn’t press the issue. Instead, he focuses on an interesting, but probably not very important, symptom of dream hoarding in higher education—policies that make it easier for “legacy” students, the children of alumni, to be accepted to the top colleges. He makes a strong case that this practice is immoral and downright un-American, citing evidence from a couple cases where abolishing the practice has not reduced alumni giving. He’s a fan of extending affirmative action to encompass social class. He also advocates the abolition of granting special advantages for well-connected students who apply for internships at top firms, non-profits and government positions. The playing field needs to be leveled—so that having parents who know the right people doesn’t give applicants a leg up.

As you can see from my overview of Reeve’s arguments, this is a book that will appeal to people across the political spectrum—in fact, it will probably appeal more to conservatives and libertarians than the “progressives” who run our colleges and have enacted these zoning laws. Reeves’ policy proposals strike me as mostly mild afterthoughts—his primary goal seems to be to open “dream hoarding” up to the disinfectant of sunlight, to encourage us to realize the inconsistencies between our stated creeds and our practices, so that we begin to voluntarily give up our hoarding. In this task he may have failed. I conclude this after having discussed Dream Hoarders with a group of students at an elite college (Wake Forest University). They accepted many of his arguments but ultimately few saw a burning need to give up on legacy admissions (which might benefit their own children) and using special connections to snag good job internships.

I won’t enumerate his proposals, but will object to his take on contraception for teenagers, when he declares that “Causal sex is fine. Casual child bearing is not” (p. 127). One doesn’t have to dig too deep to realize that treating other people so casually, so disposably, as if they are just there for one’s own pleasure, is the root of many of the problems he discusses. Would he advise his own children that “casual sex is fine”? Do parents now say this to their children? The thought of this saddens me deeply.

Finally, Reeves has a fresh take on John Rawls. Rather than considering how we would want things to be arranged if we didn’t know our own original position (shrouded behind the veil of ignorance), Reeves asks us to think about the best arrangement if no one knows his “children’s place in society, their class position or social status; nor does he know their fortune in the distribution of natural assets and abilities, intelligence and strength and the like” (p. 72, emphasis in the original). He senses that if this were the position facing us, we’d be more supportive of redistributive policies and institution, if we were less certain where our own children were going to end up. I’m not so certain.