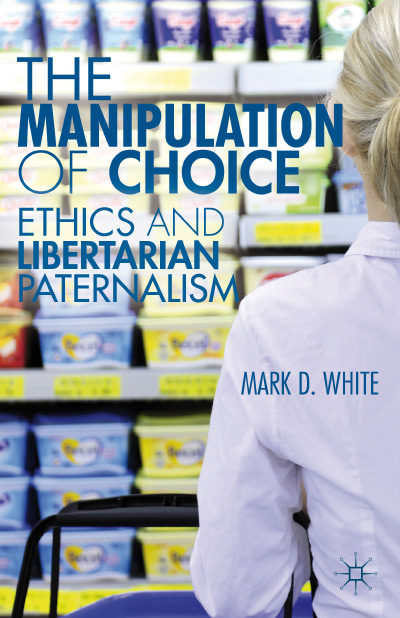 The Manipulation of Choice is an important book on a timely topic. Over the past decade, an increasing number of academics and policymakers have argued that it is morally legitimate for the state to use its coercive power to steer people’s choices—to “nudge” people to do what government agents believe is best for them—as long as they are free to opt out of the specified choice at a relatively low cost (see Richard Thaler and Cass Sunstein, “Libertarian Paternalism Is Not an Oxymoron,” University of Chicago Law Review 70, no. 4 [Fall 2003], p. 1162). Examples of libertarian paternalism include requiring shops to place soda and cigarettes at the back of the store rather than near checkout stands and encouraging citizens to save for retirement by automatically opting them into a specified investment plan. The idea is that because some people act impulsively at the grocery store, and others are too myopic or financially illiterate to set aside enough money for retirement, governments can alter the options so that people are more likely to act in ways they would act if they were relatively well informed and free from cognitive biases.

Mark White spends little time reviewing specific policy proposals that libertarian paternalists have advanced and instead challenges the moral foundations of the entire research program. His two main arguments against libertarian paternalism appeal to the epistemic limitations of planners and to the ethical problem of giving governmental authorities the power to use information about people’s cognitive biases to manipulate their choices. The first is a problem of knowledge (whether planners have the ability to infer people’s interests from their behavior or from general principles of psychology); the second is a problem of morality (whether planners have the right, even if they solve the knowledge problem, to use their power to change people’s choices).

White suggests that the “nudges” advocated by libertarian paternalists require an unjustified presumption that policymakers, armed with data from behavioral economics, have privileged access to people’s interests. Although we typically have some idea of why people act—why, for example, they tend to choose caffeinated drinks in the morning and decaffeinated drinks at night—White maintains that “there is no way for an outside observer to know what a person’s interests are” (p. 64). It is worth pointing out that White defines “interests” as “everything that a person cares about, and all the reasons a person makes choices and takes action” (p. 64). Philosophers will be wary of this definition because they usually distinguish interests from reasons (and normative reasons from explanatory reasons), but I will set aside these concerns and follow White in equating interests with normative reasons.

A central assumption White makes is that our interests vary in ways that outsiders can’t fully grasp and that our interests are sometimes so complex that they are opaque even to ourselves. For example, an exercise enthusiast might visit a donut shop every morning for any number of reasons: because it reminds her of her childhood, because she needs motivation for a long day at work, because she is too lazy to prepare breakfast, or because she has a crush on the cashier (p. 63). But a planner will be hard-pressed to come up with a reason why she should walk to Dunkin’ Donuts and eat a deep-fried creampuff even when she recognizes that it’s bad for her. When a regulator makes a guess about what people would choose if they were well informed and unbiased, White worries that the regulator substitutes his own values or judgment for the values or judgment of the person whose actions he regulates.

Although White’s emphasis on planners’ epistemic limitations is plausible, at times he makes the claim more strongly than he needs to. Thus, at one point he asserts that people’s “interests are internal and subjective and therefore cannot be known by anyone else” and that “to maintain otherwise is sheer disrespect” (p. 68). Both statements are questionable. First, some will argue that interests are (in some sense) objective, even if they are difficult to discover by outside observers. In this case, interference might be disrespectful because it is based in hubris, not because interests are subjective. Second, even if interests are purely subjective, this does not imply that they are inaccessible to outside observers—especially when the relevant outsiders are friends or family members.

Yet White insists that “no one can possibly know that our choices are bad except us” (p. 69). This statement is implausibly strong and gratuitously conflates interests with choices. Parents often make judgments about their children’s interests and nudge them in certain directions because they know their children lack experience, impulse control, and the ability to evaluate alternative courses of action as clearly as parents can. Although parents are imperfect and there is no reason to suppose that employees of the state will act toward citizens as parents do toward their children, it doesn’t seem right to say that we are always the best and only judge of our own interests or that outsiders can never know that our choices are bad. This is why some people ask friends to take their car keys away if they get drunk and why others ask for advice about whom they should date. Maybe White means that we cannot know other people’s interests with absolute certainty. Nevertheless, rational action requires a minimal awareness of our own interests, and moral action requires that we at least try to infer the interests of those around us. This is especially true when other people’s welfare is wrapped up with the choices we make, which occurs when we decide to vaccinate our children or prevent friends from driving (or sending amorous text messages) after downing too many gin and tonics.

Suppose, however, that the knowledge problem can be solved, so that planners (sometimes) know our interests better than we do. Paternalism still denies individual autonomy, White argues, “by blocking or manipulating choice to promote the interest imposed by the paternalist” (p. 92). He defines autonomy as “the right to determine one’s own interests and actions” (p. 84) and thinks that although our autonomy can be compromised in private and commercial life, there is something uniquely wrong with its being compromised by government. For one thing, he says, people already are (or should be) on guard against profit-seeking firms using psychological tricks to shape their preferences and manipulate their behavior. But when government planners try to nudge us in a preferred direction by exploiting knowledge about our cognitive biases, we do not expect it, so libertarian paternalists will tend to reinforce our biases (p. 119). Against White, we might think that people should know better and should recognize that government policies and promotional campaigns are not always so different than propaganda campaigns put out by private firms (consider, for example, the Drug Enforcement Administration’s recent attempt to link recreational drug use with support for terrorism). Nevertheless, White is right to point to a difference between manipulation by government and business: advertisers cannot force us to buy their product, even if they make it look appealing; governments can use their coercive power to alter our choice environment in ways that exploit our ignorance or biases to achieve ends that we don’t acknowledge as our own.

One of White’s most compelling challenges to libertarian paternalism turns on the connection between choice manipulation and the development of character virtues. The fact that nudges are designed to prevent us from acting imprudently means they will also shield us from opportunities to make mistakes and to learn from them (pp. 121, 135). Even if governments might lead us to make beneficial choices, they cannot lead us to make wise or responsible choices because virtues cannot be imposed from outside but arise instead in response to the choices we make, especially bad choices. If virtues such as temperance and tenacity require us to set goals and struggle through temptation, then they may wither in a world in which government nudges us in directions we don’t fully understand. Indeed, this was one of John Stuart Mill’s central concerns with a society that squelched individuality by constraining choice:

It really is of importance, not only what men do, but also what manner of men they are that do it. Among the works of man, which human life is rightly employed in perfecting and beautifying, the first in importance surely is man himself. Supposing it were possible to get houses built, corn grown, battles fought, causes tried, and even churches erected and prayers said, by machinery—by automatons in human form—it would be a considerable loss. . . . Human nature is not a machine to be built after a model, and set to do exactly the work prescribed for it, but a tree, which requires to grow and develop itself on all sides, according to the tendency of the inward forces which make it a living thing. (John Stuart Mill, On Liberty [London: John W. Parker and Son, West Strand, 1859]. Accessed from http://oll.libertyfund.org.)

If this is right, although some people may benefit from paternalistic nudges, some nudges may be insidious because the whole point is to design our choice architecture in ways that exploit our cognitive biases in order to move us in the “right” direction without employing our higher faculties.

In the final chapter, White emphasizes that nudges can by varying degrees raise the cost of behaving in ways that libertarian paternalists consider imprudent. These costs can, in effect, become a kind of sin tax—one that’s paid in the currency of time rather than money. Indeed, Thaler and Sunstein concede that the line between straightforward paternalism and libertarian paternalism is a thin one, determined mainly by the relative cost of exit or of choosing options not preferred by planners (“Libertarian Paternalism Is Not an Oxymoron,” p. 1186). For example, a libertarian paternalist might permit us to gamble or use recreational drugs but force us to drive to a seedy part of town to do so. The option still exists, but the cost of choice can become prohibitively high, including an elevated risk of getting robbed in a dangerous neighborhood. At its best, libertarian paternalism is a relatively benign form of manipulation. At its worst, White suggests, it undermines our autonomy and raises the cost of perfectly rational behavior that government planners simply fail to make sense of.

The Manipulation of Choice is an accessible book that is especially well suited for students. But it is also a welcome challenge to a currently fashionable theory that libertarians and paternalists alike should read with pleasure.