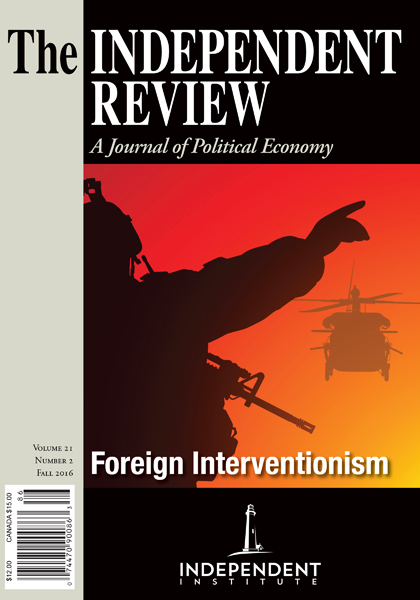 The Courage to Act
A Memoir of a Crisis and Its Aftermath
By Ben S. Bernanke
Kindle Hardcover Paperback Audiobook MP3 CD
This book review appeared in the Fall 2016 issue of The Independent Review.

The Courage to Act is a comprehensive description of the recent financial crisis and the subsequent recovery from the U.S. Federal Reserve’s perspective. According to Ben Bernanke, the Federal Reserve made a few errors in not more tightly regulating the large banks before the financial crisis, but precrisis monetary policy was not a factor in creating the financial bubbles that preceded the crisis. Fortunately, the book assures us, the Fed’s courage to act boldly and innovatively prevented the worst depression in human history. The Fed team was composed of people of action who made a mistake or two, but without their brave decisions the world’s economy would be in serious trouble today.

The book also provides an interesting history of Bernanke’s personal life, including his growing up in a small southern town and his experience in the academy. There are also numerous stories about meetings, dinners, and the like where critical decisions were made. If you are interested in seeing “how the sausage is produced,” the book provides many details.

Bernanke believes that the Fed’s actions are the primary reason the U.S. economy is doing so well today relative to the European Union (EU). He attributes the EU’s slower recovery primarily to ineffective fiscal and monetary policies.

Bernanke is critical of Freddie Mac and Fannie Mae and believes these two government-sponsored enterprises played a significant role in creating the housing bubble that contributed materially to the financial crisis.

On numerous occasions during the crisis, he expressed the opinion that monetary policy had strict limits and criticized Congress for its fiscal policy. However, he quickly argues for more monetary stimulus and ultimately concludes that monetary stimulus saved the day. He argues that the repeal of the Glass–Steagall Act was not a factor in creating the financial crisis and may have actually reduced risk. Also, he is opposed to breaking up the large banks and prefers tight regulation. Interestingly, the Fed seriously considered nominal gross domestic product (GDP) targeting but firmly rejected the idea.

Bernanke describes himself as a conservative who believes “that market economies were best for generating economic growth and improving economic welfare” (p. 433). However, it appears markets need a great deal of guidance from the thoughtful individuals at the Fed. He is supportive of the Dodd–Frank Act, although he thinks the lack of oversight of the Consumer Protection Agency is a serious mistake. He believes the Fed should have remained responsible for consumer protection.

The quantitative easings have been very successful, according to Bernanke, and the Fed’s $4.5 trillion balance sheet is not an issue because it is similar in size to other central banks’ balance sheets.

He tries to deflect the criticism that the Fed’s interest-rate policy has hurt savers by indicating that the market interest rates would be low anyway. He then quickly turns around and notes that the Fed has lowered rates, which he claims has been highly beneficial to the economy.

He is optimistic about the future of the United States because our demographics are better than those of the rest of the developed world (more babies, more immigration) and because we have major competitive advantages in technology and an entrepreneurial tradition. He does not explain how this entrepreneurial tradition might be affected by the substantial increase in regulations. Also, he does not express serious concerns about the massive future liabilities from government entitlement programs because he apparently believes that the recent slower growth in medical costs will largely deal with this problem. He supports significant innovation in education, including public/private partnerships.

Bernanke rejects all the proposed reforms of the Fed such as a Fed audit, the setting of interest rates based on a formula (for example, the Taylor rule), and any restrictions on the Fed’s emergency lending powers. The Fed, he argues, needs maximum flexibility to make up the rules as it goes, as it did during the recent financial crisis.

I must admit I found this book painful to read. At the time of the financial crisis, I was the longest-serving CEO of a major financial institution in the United States. My company, BB&T, went through the financial crisis without a single quarterly loss. I had been head of lending during the severe correction in the early 1980s and CEO during the recession in the early 1990s. Clearly, in the period discussed in his book, Bernanke and I were living in different universes. His perspective that the Fed’s actions possibly stopped the worst depression in human history seems detached from reality to me. I think that this irrational fear negatively affected the Fed’s decisionmaking and spread fear to markets. The vast majority of banks in the United States were not on the verge of failing. According to the Federal Deposit Insurance Corporation (FDIC), the banking industry suffered a loss in only one year, and the total loss was only $11 billion. This does not sound like Armageddon.

I am confident from my real-world experience that the Fed’s monetary policies played a critical role in creating the crisis. The negative real interest rates of the early 2000s incentivized massive capital misallocation, which was focused around Freddie Mac and Fannie Mae in the housing market. However, there were bubbles in multiple markets, including commodities, the stock market, and even auto finance. Where did all the money come from to finance these bubbles? The Fed has fundamental control of the monetary base and effectively encouraged banks to leverage through its execution of the Basel capital standards.

Bernanke’s fear of contagion was grossly exaggerated. BB&T had done business with all the major investment banks for many years. If they all had failed, BB&T would have experienced some losses, but the losses would not have been material. The same is true for most commercial banks.

Entering recession in the early 1980s, the United States was in much worse financial condition than in 2007, and yet there was no panic, and the United States experienced a rapid and sustained recovery. A similar recovery occurred following correction in the early 1990s. Obviously, there were major differences in fiscal policy. However, there were also two significant differences in the regulatory response. First, the Fed’s regulatory actions in the recent crisis were totally inconsistent. Bernanke has explanations for the inconsistencies, but his arguments are unconvincing. Clearly, decisions were made ad hoc without a plan. Why save Bear Stearns and let Lehman fail? Why force Wachovia out of business and sell it to Citigroup, which all market participants knew was in worse financial condition than Wachovia, and then renege on the contract with Citigroup and sell Wachovia to Wells Fargo? Why pay off the uninsured depositors atWashington Mutual at the expense of bond holders instead of absorbing the losses in the FDIC insurance fund? This action closed the capital markets for banks and pushed Wachovia into trouble.

Bernanke indicates that he often made statements more optimistic then he really believed. He fails to realize that his admission is unnecessary because sophisticated market participants knew his comments were unrealistic. The combination of the incredibly inconsistent decision process that effectively destroyed the rule of law and the apparent lack of understanding of the economic environment among powerful government decision makers created the panic. The panic turned a difficult correction into the Great Recession.

Second, although Bernanke claims the Fed examiners were told to loosen lending standards, they tightened. In previous corrections, the examiners went after the unhealthy banks and let the healthy banks continue to operate as usual, which allowed the healthy banks to support their customer base and finance the unhealthy institutions’ credit-worthy customers. This time, led by the Fed, the examiners radically tightened lending standards in healthy banks. The regulators forced BB&T to put borrowers out of business who could have survived the recession. I suspect Bernanke was ignorant of what his examiners were doing. The examiners had been heavily criticized for not identifying the problems in advance and so were obviously protecting themselves.

Bernanke quotes Abraham Lincoln: “If the end brings me out alright what is said against me won’t amount to anything” (qtd. on p. 425). He subsequently argues that despite the slow recovery the United States is doing much better than the EU and that U.S. monetary policy has played a major role in this recovery. The implication is that “the end brings me out all right.”

Of course, the United States has been doing better than Europe since the 1890s. The proper measure of economic well-being is growth in productivity because we ultimately cannot consume more than we produce. From 1947 to 2007, U.S. productivity increased at an average annual rate of 2.1 percent and has grown rapidly after recessions. From 2007 to 2015, productivity grew at 1.2 per annum, a distressingly slow growth rate. Does this “bring the Fed out all right”?