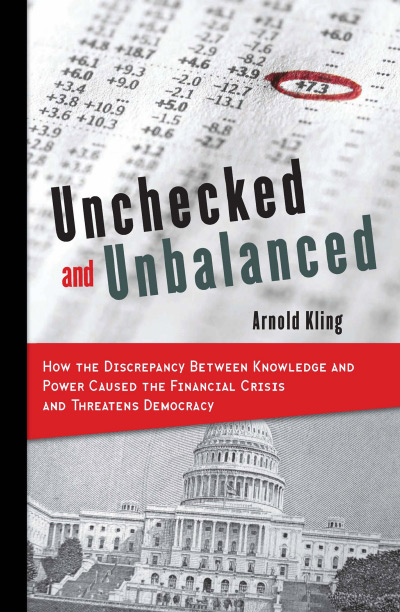 Unchecked and Unbalanced
How the Discrepancy Between Knowledge and Power Caused the Financial Crisis and Threatens Democracy
Arnold Kling
Kindle Hardcover
This book review appeared in the Spring 2011 issue of The Independent Review.

Arnold Kling’s Unchecked and Unbalanced, a timely, ambitious, and short book, covers two main topics: the financial meltdown of 2008 and the potential causes of modern government failure. The first chapter, on the financial crisis, serves up the financial crisis as an example of government incompetence. The second chapter explains changes in governance that might have led to increasing incompetence over time. The third chapter provides examples of how the provision of government services might be reinvented to make it more efficient and responsive to the public’s desires.

I agree with Kling’s claims that the financial crisis resulted more from government intervention than from the excesses of private firms that were insufficiently regulated. I also sympathize with his claims that government is not sufficiently responsive to the desires of its citizens, that politicians have too much power, and that we should try to improve both of these conditions. The question is whether his particular analysis, which seems to be quite original, actually gets to the main source of the problems and whether the recommendations emanating from his analysis can remedy such flaws to an important extent. On these scores, I am not convinced.

The other major factor he identifies as leading to the mortgage meltdown is what he refers to as the “suit versus geek” divide. He states: “[T]he financial engineers who were responsible for the creation and pricing of complex mortgage securities did not educate key executives or heads of regulatory agencies about the true nature of the new products.” I am not so sure. I am aware of no evidence that the financial engineers understood the danger of these mortgages any better than their bosses did. Nor did finance professors, who are as geeky as Wall Street types, give any indication that they thought these loans were problematic. Perhaps Kling has some evidence (not provided in the book) to support this thesis, but my impression is that the financial engineers did not understand the nature of the mortgages because they focused on how low-down-payment mortgages performed during a period when inflation-adjusted house prices happened to be rising (as they did from the mid- 1990s on) and did not have the humility to admit that they had too little information to draw any conclusions about what would happen if house prices fell.

Most analysts also wanted to believe that low-down-payment mortgages were safe because political decision makers wanted this conclusion to be true and because rewards flowed to the geeks who had reached it. If you look for academic papers arguing that the mortgages with low down payments are a bad idea because they will lead to higher default rates, you will not find any, except perhaps for one that Ted Day and I wrote in 1998.

Kling ignores some of the political forces involved in lowering down payments. For example, he argues that the Community Reinvestment Act was not a major factor in the mortgage meltdown. If the act is narrowly construed, he is correct, but the thinking behind the act was a major factor in helping to reduce down payments required for mortgages. The simple truth is that down payments were an impediment to minorities who were interested in purchasing a house. The only inexpensive way for the government to increase significantly the number of minority homeowners was to lower the required down payments. In the 1990s, the geeks at the governmentsponsored enterprises were writing papers extolling the virtues of “flexible lending standards,” where the term flexibility was a euphemism for, among other things, low down payments. Perhaps the regulations of bank capital requirements that Kling properly criticizes were not simply random mistakes but instead were set up to serve particular purposes, such as providing incentives for loans with low down payments.

Moreover, the financial crisis may not be a good example of the book’s major thesis about the growth of government. Kling’s main point is that power is becoming more concentrated, whereas information is becoming more diffuse. He believes, in essence, that an increasing proportion of decisions made by government officials are mistakes because the number of legislators does not increase as the economy grows (which to me does not increase concentration of power so much as it increases the absolute amount of power per legislator), and thus a small number of legislators who control a growing country are overwhelmed by the increasingly diffuse information and therefore make increasingly bad decisions. Whether his overall thesis is true or not, it does not appear that information diffusion was responsible for the mortgage meltdown so much as a willful disregard of the information needed to assess lowdown- payment mortgages properly.

Kling’s main thesis is that under our current system even a well-intentioned legislator is overwhelmed and that all legislators are granted too much power. He doesn’t consider, however, the fact that although the number of legislators is fixed, the number of legislative staff members is not fixed and in theory can grow with the size of the government budget. I presume that legislators rely on their staffs in making decisions, so that the ratio of decision makers, including the staff members, to overall spending may very well be constant. Kling largely ignores the size of the staff.

Either way, Kling is correct that government is too large, even though he seems to emphasize more that it is overburdened than that it has taken on too many tasks. His proposal to relax the burden by increasing the size or number of legislatures (or decision makers) will only tend to increase the size of government.

Kling unfortunately does not delineate what services government should provide and whether government has taken on responsibilities that the private sector can serve better. He states that the government provides “public goods,” but he doesn’t define the term public goods or seem to be using it as it is used by economists: governments provide many goods that are not public goods under the economic definition.

Kling avoids a discussion of the proper tasks of government and instead moves to a suggestion that what he calls functional governmental units compete to provide specialized services, such as picking up the trash, previously provided by the local government monopoly. He also suggests that groups such as neighborhood associations be allowed to form as if they were “charter” groups (analogous to charter schools) that would take on most of the activities currently associated with city or county governments. These arrangements would increase the number of decision makers, thereby decreasing the influence of the average political decision maker.

A more fundamental question he does not consider is why any form of governmental unit needs to pick up trash as opposed to having private companies do it. And why does everyone in a neighborhood need to choose the same provider, as he suggests? I spend the summer in a small mountain community where everyone in town transacts with one of several private firms to pick up his household’s trash. This arrangement seems to work fine. Although Kling may be correct that allowing market competition to provide this service would be an improvement, I do not understand why the providers need to be governmental or nonprofit and why the payments need to be in the form of taxes.

To sum up, Unchecked and Unbalanced is an interesting book. It covers much material in too few pages, however, which engenders some superficiality. The questions Kling asks are not always the ones I would have asked, but they are thought provoking nevertheless.