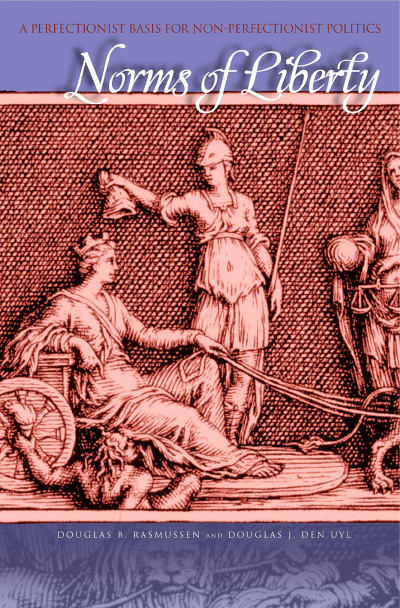 Norms of Liberty
A Perfectionist Basis for Non-perfectionist Politics
By Douglas Rasmussen and Douglas Den Uyl
Hardcover Paperback
This book review appeared in the Winter 2006/07 issue of The Independent Review.

Douglas Rasmussen and Douglas Den Uyl do not shy from a fight in their latest defense of neo-Aristotelian liberalism. They bravely respond to a wide range of criticisms and more than twenty-five individually stated objections to their account of liberalism. Moreover, the book provides a thorough review of the arguments and objections in the growing field of neo-Aristotelian ethics. Thus, Norms of Liberty is an important contribution to both ethics and politics. Though the authors focus sharply on defending liberalism from its critics, the book is concerned primarily with a positive justification of liberalism. Accordingly, in this review, I focus on the two key elements of this account: what they term “Liberalism’s Problem” and its “Metanormative Solution.”

As in their earlier work, Liberty and Nature (LaSalle, Ill.: Open Court, 1991), the authors set out to put liberalism on a firm Aristotelian foundation and in so doing see themselves as responding to—and resolving—the crisis of liberalism. In Norms of Liberty, however, they go much further in explicating what the crisis of liberalism is and who the critics are. Indeed, this approach is one of the main advantages of Norms of Liberty over Liberty and Nature: the new book lays out and answers the objections to the authors’ arguments more thoroughly and rigorously.

Before proceeding, we need to understand what liberalism is meant here. It is clear that the authors understand liberalism as a broad political philosophy that holds to certain central tenets: “that political power is not something due anyone by natural right, that progress is possible, that the individual is the basic social unit, that people should have the freedom to pursue their own conceptions of the good life, and that the political/legal order should be limited to protecting individuals in the pursuit of their own conceptions of the good life” (p. 11). This view encompasses what many call classical liberalism, libertarianism, and modern or welfare liberalism. All these different versions of liberalism hold to these tenets, although they interpret and apply them in divergent ways.

Rasmussen and Den Uyl divide the critics of liberalism into three main (often overlapping) groups. The first group, including thinkers such as Alasdair MacIntrye and John Gray, comprises critics more broadly of the Enlightenment and so by extension critics of liberalism as the political philosophy of the Enlightenment. The second group includes communitarian critics—for example, Michael Sandel and MacIntrye again—who concentrate mainly on the central role that liberalism gives to the individual at the supposed cost to the community. Third come the conservative critics of liberalism, including natural-law theorists such as Robert George and John Finnis. Throughout Norms of Liberty, the authors respond to all of these critics, but especially to the communitarians—in large part because communitarians often claim a neo-Aristotelian legacy and so are the main competitors to the view defended in Norms of Liberty.

Liberalism’s problem is primarily a tension between ethics and politics. Liberal political principles are supposed to be universal; they apply to all individuals without exception. At the same time, liberalism is not supposed to favor one pursuit of the good life over any another; moral pluralism is part and parcel of the liberal polity. Liberalism’s problem is finding the foundation and structure to deal with this tension between each individual’s liberty to pursue his own version of flourishing and the universality of liberalism’s tenets.

Rasmussen and Den Uyl argue that the solution to liberalism’s problem requires what they call “metanormative” principles. Normative principles are concerned with what one ought to do or how one ought to be. The authors employ the term metanormative to cover different sorts of moral principles, which “regulate the conditions under which [normative] conduct could take place” (p. 39). These principles are not guides for the individual’s actions or for the development of his moral character. They are intended, instead, to cover the conditions under which such action and development can take place. The authors provide the following helpful analogy. There are rules for playing the game of baseball: the batter must run to first base when he hits the ball, three strikes on a batter constitutes an out, and so forth. There are also guidelines for playing baseball well, such as knowing when it is best to steal a base, which are different from merely following the rules of baseball. Metanormative principles are like the rules that constitute a baseball game, and normative principles are like ones that guide good playing.

Self-direction is stymied when others can direct an individual without his consent, but such direction is possible primarily (some might argue only) through the initiation of force against the individual. In the absence of coercion, individuals are left free to exercise their self-direction and thereby to pursue their own vision of flourishing. Thus, metanormative principles, in the form of individual rights, protect the conditions under which self-direction is possible by banning the initiation of force. In so doing, these principles protect the possibility for all individuals to pursue their flourishing, but they do not give preference to any particular account of flourishing—which thereby, according to the authors, resolves liberalism’s problem.

Is a distinction between metanormativity and normativity necessary? Rasmussen and Den Uyl deal with this question (pp. 301–3), but they do not get at one significant aspect of it fully. Their answer focuses on why we cannot simply rely on normative principles, such as justice, to resolve liberalism’s problem. Another way to put the objection, however, gets at a different though related issue, which the authors do not consider directly. If metanormativity principles turn out, as the authors argue, to consist of the rights to life, liberty, and property that liberals already espouse, does an account of metanormativity give us anything beyond the traditional discussion of rights? Part of the reason why the authors do not answer this question directly is that the book’s theme is the answer. It is important to give an account of metanormativity because such an account provides the moral justification for rights; that is, metanormativity provides the link between ethics and the liberal political order. Moreover, metanormativity provides a moral justification that is compatible with liberalism’s pluralism because it does not rely on any particular normative account.

Although Norms of Liberty covers ground similar to that covered in the authors’ earlier works, it is well worth reading even for those familiar with those works. The authors go into more detail in responding to objections to their arguments, and they more fully explicate their view of liberalism both in terms of placing it in its historical context and in terms of providing its ethical and even metaphysical foundations. In sum, Norms of Liberty is a significant addition to the philosophical literature of liberty, and it will surely be an influential work for years to come.