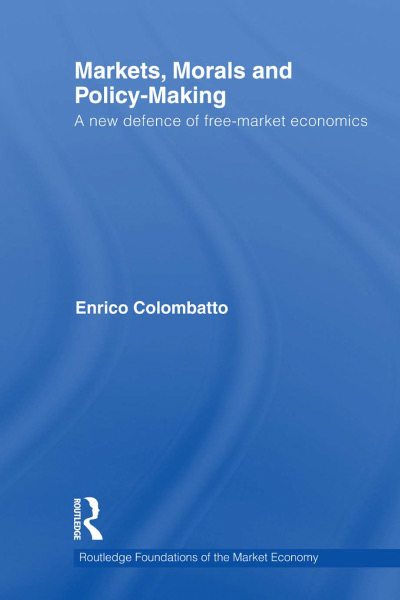 Markets, Morals and Policy-Making
A New Defence of Free-Market Economics
By Enrico Colombatto
Kindle Hardcover Paperback
This book review appeared in the Spring 2013 issue of The Independent Review.

“I abandoned free market principles to save the free market system.” Those were the words of President George W. Bush during a 2008 interview as he discussed his administration’s economic interventions in the wake of the financial crisis. Indeed, capitalism has come under renewed fire in the wake of the crisis, with politicians and “experts” offering a wide menu of interventions and regulations that they claim will cure the capitalist system’s ills. For the most part, a large majority of the general public supports such interventions and views government as the solution to economic and social problems—for example, business cycles, unemployment, inequality, and poverty. Given the hostility toward capitalism, what is the advocate of free markets to do? This question provides the focus for Enrico Colombatto’s Markets, Morals and Policy-Making.

Colombatto argues that advocates of free markets are losing the battle because they cannot adequately defend their position. This inadequacy, he argues, springs from their reliance on consequentialist arguments for the efficiency of markets. As suggested by my quotation of President Bush, in times of crisis those who hold a consequentialist position will find themselves supporting government interventions to maximize the “common good.” The real solution, however, according to Colombatto, is a return to moral principles—or, as he puts it, “abandoning the standard of efficiency (‘it is good because it works’) and replacing it with that of justice (‘it is good because it does not violate natural rights’)” (p. 9).

Colombatto develops this core argument in ten chapters. In doing so, he covers a great deal of ground, including economic methodology, the ethics of policymaking and economics, the history of economic thought, economic development and transition, and state legitimacy. Given the breadth of topics covered, I cannot cover them all in a single review. Therefore, I summarize here what I see as the book’s major strengths and weaknesses.

I see three major strengths. First, Colombatto does an excellent job of reminding us that policymaking requires value judgments and, hence, an underlying defense of the fundamental values that analysts and policymakers hold. Even though economists claim to be value free and scientific, they often smuggle in their value judgments when they move from analysis to policy recommendations, and policymaking requires judgments of what is good and bad and what is right and wrong. Colombatto provides a valuable service in reemphasizing this point and calling for an honest, open discussion of the value systems that undergird calls for government interventions.

A second strength is Colombatto’s treatment of the evolution of the discipline of economics. This treatment includes a detailed history that can be broken into three stages. The first was the period in which economics was not yet a social science. At that time, which Colombatto argues lasted until the end of the seventeenth century, there was no systematic study of economics and economic issues as a separate discipline. In the second stage, the distinct discipline of economics emerged from the Scottish Enlightenment. Economics was then seen as having relevance primarily as a tool for understanding the world. The third stage consisted of the transformation of economics from a means of understanding into a tool of control. Colombatto places the origins of this third stage at the beginning of the twentieth century.

During this third stage, economists began to abandon the political economy foundations of their discipline, aspiring to transform economics into a hard science. As they did so, the fundamental focus of study shifted from understanding how imperfect people coordinate their actions with others to an exercise in modeling representative automatons as hyperrational, maximizing agents. This shift drained all reality from the study of economics. There was no longer room for human learning, discovery, and experimentation. Formal rules and informal conventions, which are crucial to effective coordination in reality, were also discarded. Of course, these models allowed economic “experts” to identify a host of market failures and to design government policies to correct the imperfections of men and of the markets in which they act. Colombatto’s history of the evolution of economics is well executed; he does a good job of explaining how the discipline evolved and got off track after its early commitment to understanding and explaining human action.

Finally, the book’s third strength is that Colombatto highlights the important link between policymaking and state legitimacy. As noted, a large majority of citizens now view government intervention as the only legitimate solution to the various problems they attribute to capitalism. Many economists hold a similar sentiment, believing that government policy has a legitimate role to play in correcting market failures. Why does this legitimacy exist? Part of the answer can be found in the approach taken by modern economics, which views economic science as means of social engineering and fine-tuning. In this context, the solutions provided by economic models serve as the fodder for policymakers, who then implement enlightened plans to improve the human condition. An activist government requires activist economists, and there is no shortage of economists willing to confidently offer solutions to what are deemed to be society’s ills.

But this fact does not explain why many economists who claim to advocate free markets also advocate government interventions that ultimately undermine the dynamism of markets. Here Colombatto returns to his basic critique of consequentialism. For him, consequentialism is fundamentally incompatible with individualism and therefore with economic freedom and free markets because it requires choosing what ends should be pursued for the common good, which necessarily trumps individuals’ judgments. This logic leads Colombatto to reject consequentialist defenses of markets and to argue instead for a defense of markets grounded in individual rights. The key strength of this line of argument is that it highlights the connection between government intervention and state legitimacy. That said, however, it is Colombatto’s ultimate conclusion—the rejection of consequentialism— that I find to be the book’s greatest weakness.

In dismissing consequentialism as an appropriate defense of free markets, Colombatto overlooks important work by free-market economists who provide a consequentialist ethical foundation for the market system. He provides no citation or discussion of Henry Hazlitt’s The Foundations of Morality (Irvington-on-Hudson, N.Y.: Foundation for Economic Education, [1964] 1998) or Leland Yeager’s Ethics as a Social Science: The Moral Philosophy of Social Cooperation (Northampton, Mass.: Edward Elgar, 2001). Both books are important contributions to the very topic that Colombatto is dealing with. Like Colombatto, Hazlitt and Yeager recognize that policymaking requires value judgments about what is desirable and undesirable. And like him, both wrestle with the proper grounding of the ethics of a free-market system.

Of course, to determine what general rules should be followed, one still needs to determine the ultimate end or “good.” In this regard, Hazlitt and Yeager, following David Hume and Ludwig von Mises before them, contend that the relevant criterion is social cooperation, which refers to peaceful interaction between individuals. Social cooperation allows for human flourishing because it allows people to take advantage of the economic gains from specialization, the division of labor, and entrepreneurship as well as the noneconomic gains from the development of community. Given this criterion, the requisite then becomes engagement in comparative institutional analysis in order to understand the general rules and institutions that facilitate or prevent social cooperation. Here economics has a crucial role to play.

It is unfortunate that Colombatto does not engage Hazlitt and Yeager’s arguments because doing so would have strengthened his own position by further clarifying exactly how his moral defense of free markets is “new” compared to existing ethical defenses of free markets. Yeager dedicates significant space to discussion of many of the critiques of consequentialism that Colombatto advances—for example, that it is at odds with individualism, that it fosters collectivism and government intervention, and so forth. It would have been interesting to see whether Colombatto agrees with these arguments and whether his critique of consequentialism applies only to act utilitarianism. Further, the same aforementioned strengths of Colombatto’s book are also strengths of Hazlitt and Yeager’s work. All three authors recognize the importance of ethics and value judgments for policymaking, how economists and other social scientists often make implicit value judgments without making their underlying ethical systems explicit, and the importance of economics for explaining and understanding how a free society grounded in property rights contributes to human flourishing. But in rejecting all forms of consequentialism without directly engaging Hazlitt and Yeager, Colombatto also discards a powerful ethical defense of the free-market system that he seeks to defend.