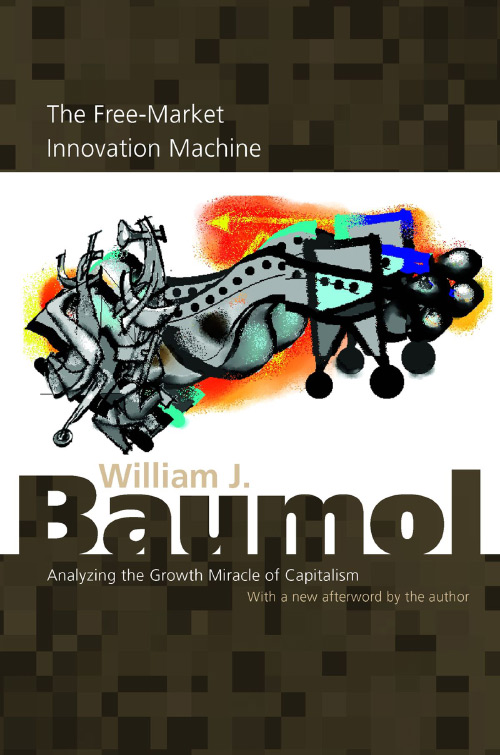 The thesis of William J. Baumol’s latest book is articulated clearly at the start. The free-market growth engine depends ultimately on institutional rules. People may have a natural entrepreneurial instinct, but that instinct can find outlet in criminal, rent-seeking, or other destructive activities as easily as in productive venues. Economic growth depends, however, on more than just rules and norms that channel such inclinations in the “right” direction. It depends also on rules governing the appropriation of intellectual property and on the precise trade-off a society makes between pricing information at its marginal cost (making it free) and providing incentives for invention and innovation by creating rules to allow appropriability for fixed periods of time. We call this body of rules patent, copyright, and, in general, intellectual property law (although, as Baumol argues, antitrust law is also relevant). The dilemma is that in the absence of such protection there are few private incentives for producing new information or discoveries, but in the presence of such protection we impose monopoly pricing and, consequently, static efficiency losses.

The first section of the book, devoted to the “capitalist growth mechanism,” is the most interesting. Here Baumol develops his vision of a capitalist economy as consisting of a competitive price-taking sector and an oligopolistic sector in which competition occurs more often on the innovation margin rather than on the price margin. The pharmaceutical and computer industries are cases in point. This oligopolistic sector is the economy’s engine of growth. Firms here must innovate or die; they also must price discriminate or die because the heavy fixed costs of innovation cannot be covered if everyone pays a price equal to marginal cost. These costs must be recouped in the same way that railroads were forced to price discriminate to cover their fixed costs for rolling stock and permanent way. Baumol cautions antitrust authorities against jumping to the conclusion that departures from marginal-cost pricing are necessarily evidence of monopoly power.

One of the unanswered questions in this book is whether our existing institutions and industrial organization create too many or too few incentives for innovation. It has been assumed commonly that there are too few incentives because of the divergence between private and social returns to such activities. Government subsidies for research and development (R&D) typically are justified on this basis. To the degree that an industry is oligopolistic, as opposed to monopolistic, however, there may be situations in which the incentives for R&D investments are too high. The clearest concern is the possibility of winner-take-all patent races, which are equivalent to all-payer auctions: the highest bidder wins, but everyone has to pay. As anyone who has participated in such an auction in a game theory class can attest, bidders, including the losers who get nothing, may end up paying substantially more than the prize is worth.

Suppose several companies are aware that a potentially beneficial process innovation lies just over the technological horizon. Each races to develop it, but only one does so first. The others will have to license the technology from the winner or leave the market because their costs will be too high. In either of these cases, the losers will have to write off their R&D expense. In such instances, collusion to reduce duplicative efforts might be socially desirable. At the same time, however, collusion may permit an oligopoly to operate as if it were a monopoly, and theory tells us that a monopoly may underinvest in innovation in order to preserve the value of existing rents.

Baumol is concerned about the implications of winner-take-all races and attempts to minimize their importance by arguing that R&D activity more often leads to heterogeneous outputs that are complements rather than direct substitutes. Thus, he claims, the race between Alexander Graham Bell and Elisha Gray to patent the telephone is the exception rather than the rule. The lengthy litigation between RCA and Philo T. Farnsworth regarding priority in the invention of television, quietly settled in 1938, however, is evidence of other important instances in which the outputs of R&D races really aren’t complementary and only one player wins (I ignore here the detail that RCA’s protracted litigation and the World War II–delayed commercialization of television deprived Farnsworth of much benefit from his patents). The situation is worse for Baumol’s argument in the case of process innovations, which may help to explain his emphasis on new products throughout most of the first third of the book. In a race to develop a new process innovation for an existing product, it is even more likely that one unambiguous winner will emerge, and the losers will either license or exit.

As Baumol’s book proceeds, it devotes a generally increasing share of space to formal models. This progression begins in chapter 4, where Baumol characterizes R&D spending as an arms race among mutually suspicious competitors. The reasons why in an oligopoly we should experience cold wars in innovation, as opposed to hot wars in prices, are not entirely clear. Nevertheless, Baumol demonstrates why, given the right assumptions about response functions, it is rational for members of an oligopoly to sustain but not to increase R&D spending unless and until a technological shock leads to a ratcheting up in everyone’s spending.

An important limitation of this model is that it accounts for the maintenance of an equilibrium without explaining how the original spending norm is determined. Baumol is forthright in admitting that a continuum of equilibria exists, and any one of the equilibria might be sustained. What determines which equilibrium is selected? “History and its fortuitous circumstance” (p. 51). As Baumol says, “oligopoly equilibria are . . . inherently unpredictable. One cannot expect a theoretical model to be able to determine what is inherently unpredictable” (p. 50). This admission is refreshingly frank and suggests that the study of industrial organization might become more of a historical science, drawing more heavily, for example, on the archival skills of business historians. It was somewhat disappointing, therefore, to discover how much of the second half of the book is devoted to model building as opposed to more discussion of how R&D spending amounts are actually determined in individual industries.

One sometimes suspects that the fun of model building is a greater attraction here than the insight the models provide into how the world works. I was struck particularly by this suspicion in chapter 15, where Baumol quotes from Esther Fano’s work. Fano has called attention to data indicating that during the Great Depression R&D employment and spending in the United States rose substantially. (These data are part a range of evidence that has led me to argue recently that the 1930s were the most technologically progressive decade of the century.) Baumol interprets these data as evidence that deficiencies of aggregate demand don’t necessarily lead to a reduction in inventive and innovative activity.

He goes on to speculate about why so much R&D spending occurred during the Great Depression, attributing this occurrence to the fact that R&D workers worked for low pay then (p. 271). He offers no evidence in support of his analysis. Indeed, because nominal wages in the technical professions tended to have some downward inflexibility and because of substantial overall price deflation between 1929 and 1933, the preponderance of the evidence indicates that the real wages of R&D workers rose in comparison with wages in the 1920s. My research suggests that employment expansion in these categories was driven almost entirely by demand-side forces: extraordinary technological opportunities existed across a broad frontier of the American economy, and R&D activity increased substantially in the context of a privately funded R&D system that had reached maturity. In part as a consequence, multifactor productivity grew more rapidly between 1929 and 1941 than during any comparable period in the twentieth century (Alexander J. Field, “The Most Technologically Progressive Decade of the Century,” working paper, 2002). Yet the “fact” that the surge in R&D activity is attributable to a drop in workers’ wages in that sector is a crucial foundation for subsequent model building in Baumol’s chapter 15.

The book includes other related instances of models built on somewhat shaky foundations. The author suggests that the R&D sector, like symphony orchestras, is afflicted by “Baumol’s disease.” Thirty-five years ago Baumol named this ailment, arguing that because over the past two hundred years no productivity improvement has occurred in the performance of a Beethoven symphony, as opposed to the manufacture of textiles, the price of a symphony orchestra ticket relative to that of cotton cloth has had to increase. Baumol maintains that the act of “thinking” has been subject to the same relative-price pressures because it takes just as long to prove a mathematical theorem now as it did in Gauss’s day.

To be sure, we probably are not reading and digesting some materials much faster than our predecessors did, but Gauss didn’t have Mathematica to work with, and researchers two hundred, let alone twenty-five years ago didn’t have access to word processing, JSTOR, or Google. Advances in computers and software have made it possible for economists to run many more regressions per hour than they could in the 1960s or even in the 1970s (not always entirely a blessing). Improvements in instrumentation have allowed the rapid decoding of the human genome, which is critical to the future of biotechnology. I don’t want to suggest that Baumol is more prone than the average economist to build models based on questionable stylized facts. He’s probably less so inclined. My point is rather to question the relative benefit of these exercises, as opposed to what we might gain from systematic consideration of the impact of “history and its fortuitous circumstances” in influencing the course of individual industries.