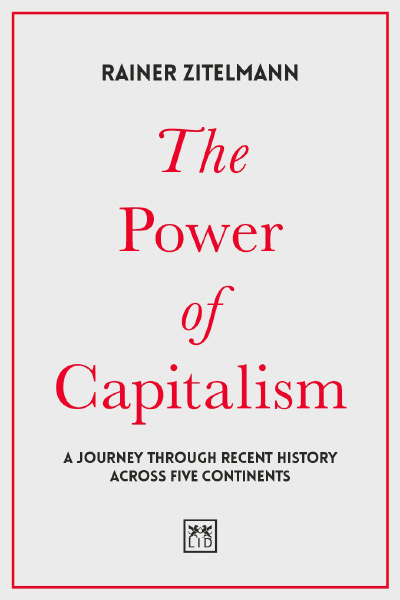 The Power of Capitalism
A Journey Through Recent History Across Five Continents
By Rainer Zitelmann
Kindle Hardcover
This book review is a web exclusive for the Fall 2022 issue of The Independent Review.

Most readers of this journal will take it as obvious that capitalism is a “better” economic system than socialism, in the sense that it results in vastly higher standards of living than its rival system; but it is not obvious to many “progressives” who, like Thomas Piketty, call for egalitarian reforms and increased planning. Rainer Zitelmann proposes in this excellent book to examine the two systems, and he also explores accounts of why many intellectuals do not view capitalism with favor.

Zitelmann is well-qualified to conduct this examination. He is the author of the definitive work on Hitler’s economic ideas, originally written as a doctoral dissertation in 1986 and now available in English translation under the title Hitler’s National Socialism. Since the completion of that book, he has left the academic world but has continued to publish a number of books on economic topics, all of them showing assiduous research.

He defines the task he has set himself in this way: “Which economic system delivers the greatest quality of life for a majority of people? Quality of life is determined, especially though not exclusively, by the individuals’ level of economic wealth and also by their level of political freedom.... Any comparisons drawn between countries in this book are based only on the criteria of their respective economic systems and economic performance. That is not to say that political freedom is a less important aspect of quality of life—however, it is beyond the scope of this book” (p. xi).

Zitelmann makes clear that neither system exists in its pure form. All of the economies in the world are “mixed” systems; market economies include considerable government intervention and socialist countries, even in the most extreme instances such as Soviet Russia and North Korea, could not altogether dispense with reliance on world market prices. Nevertheless, the division between the two systems is manifest.

If that is the question, what method should be used to answer it? Zitelmann says that detailed historical comparisons, rather than abstract models, are required: “My own first degree is in history and political science and I went on to obtain two PhDs: in history and sociology, respectively. Accordingly, my approach in this book is that of a historian” (p. xii). He proceeds in the first seven chapters of the book to examine economic conditions in China, Africa, Germany, North and South Korea, Britain and the United States under Thatcher and Reagan, Chile and Venezuela, and Sweden. In each instance, the superiority of the free market is evident.

I do not have the space to cover all of these areas but will discuss only a few; I have discussed some of the rest in another review of the book. The superiority of capitalism is particularly evident if one compares North and South Korea: one is impoverished while the other is prosperous. “Vague estimates—there are no exact figures available—put North Korea’s per capita GDP at roughly 583 USD. The country is frequently ravaged by famines that kill thousands of its inhabitants....That North Korea has such a low standard of living despite its exceptionally large reserves of mineral deposits is primarily due to the political leadership’s insistence on retaining a socialist economic system....Although North Korea’s agricultural sector employs around six times as many people as its South Korean counterpart, the country’s agricultural production barely meets demand even in good years” (pp. 61, 67).

South Korea, under a market economy, fares far better. “According to the 2018 Index of Economic Freedom, the latter ranks 27th among the freest counties in the world, just behind Germany in 25th and ahead of Japan at 30th place and with a score of 90.7 out of 100 possible points in the ‘business freedom’ category. North Korea, by comparison, brings up the rear in 180th place and scores only 5.0 out of 100 points in the ‘business freedom’ category” (p. 68).

The result is similar if Chile and Venezuela are compared. “The contrast between these two Latin American countries could hardly be starker: Chile ranks 20th out of 180 countries in the 2018 Index of Economic Freedom, while Venezuela is at the very bottom, even behind Cuba and beaten to last place only by North Korea. While Chileans are better off than ever before, Venezuelans are suffering from inflation, economic decline and growing political oppression” (p. 93).

One might imagine this sort of objection being posed to Zitelmann: “If the choice lies between capitalism and a rigid regime of central planning like North Korea and Venezuela, you have made a convincing case the free market economy is better. But are you not forcing an open door? Who besides a few fanatics would think otherwise? The choice that we confront in the United States is of another sort. It is between more or less government intervention, more or less redistribution of income and wealth, within the generally accepted framework of a market economy. Your comparisons do not help in making this choice.”

Zitelmann is fully prepared for this objection, and his response to it is convincing. When changes are made in the direction of economic freedom, the economy improves, and the economy gets worse when economic freedom is reduced. For example, he cites the leading authority on the Chinese economic reforms, Professor Zhang Weiying, who told him that “the biggest misconception in China today is that some politicians and economists believe that the country’s impressive economic growth is the result of a special ‘Chinese way’ with a high degree of state influence. Professor Zhang stressed to me that it is important to understand that the Chinese economic miracle did not happen because of, but in spite of, the sustained influence of the state” (p. 19).

If Zitelmann has successfully responded to this objection, the path to full acceptance of his case for the market is not yet clear of obstacles. He must respond to another objection: “Even if it is right that economic liberalization best promotes economic prosperity, must not this value be weighed against the competing value of equality? Capitalism allows billionaires to have vastly more wealth than the rest of us. Is this not a clear offense against justice?”

In the alternative scenario, let’s take the total wealth of 115,000 dollars and split it evenly between all 1,003 residents—114.66 dollars per capita. As one of the poor with a baseline wealth of 100 dollars, which of the two societies would you prefer—economic growth or equal distribution? And what would happen if, as a consequence of economic reforms aimed at creating greater equality, the island’s total wealth were to shrink to a paltry 80,000 dollars, or less than 79.80 dollars per year?” (p. xiii).

It is to be feared that some intellectuals, of the sort that C.D. Broad called “clever-silly,” would persist in their demand for equality. To them, Zitelmann says: “If you are primarily interested in equality, this is the wrong book for you. If you care about identifying the conditions under which a majority of people are better off—if you believe it does matter whether a society is rich or poor—please join me on my journey through time across five continents in search of answers” (p. xiv).

Rainer Zitelmann deserves the thanks of all readers for his decisive intervention in the major economic debate that the world faces today.