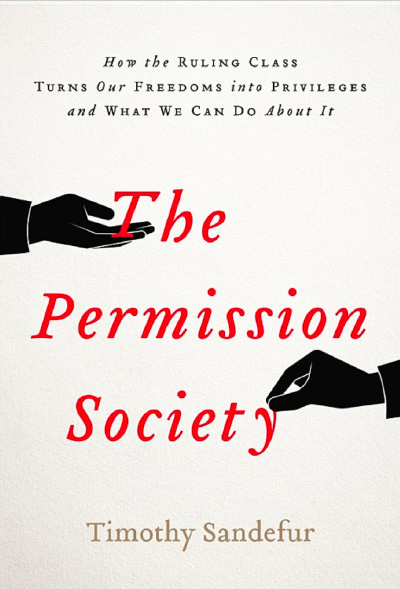 The Permission Society
How the Ruling Class Turns Our Freedoms into Privileges and What We Can Do about It
By Timothy Sandefur
Kindle Hardcover
This book review appeared in the Fall 2017 issue of The Independent Review.

“It’s easier to ask forgiveness than it is to get permission.” That saying—most commonly attributed to Grace M. Hopper, a computer scientist who was a rear admiral in the United States Navy—has become the mantra motivating an entire generation of Silicon Valley technology entrepreneurs to go out and do bold things. America’s information technology powerhouses—Apple, Google, Facebook, Amazon, eBay, Uber, Airbnb, and others—are now household names around the globe because they didn’t first seek out anyone’s blessing to launch the next great gadget or service; they just did it.

Of course, even as this sort of “permissionless innovation” was helping fuel the explosive growth of the U.S. tech sector, it was also rankling the feathers of plenty of policy makers, both domestically and internationally. In particular, sharing-economy pioneers Uber and Airbnb currently find themselves in the midst of a veritable “empire strikes back” moment with legislators and regulators across the world who are trying to pigeonhole these firms into their old regulatory regimes. But plenty of other companies and consumers are faced with a growing avalanche of red tape that makes new lifeenriching innovation harder than ever to create or enjoy.

It is repressive behavior like this that has Timothy Sandefur worried. In his new book, The Permission Society: How the Ruling Class Turns Our Freedoms into Privileges and What We Can Do about It, Sandefer hopes to inspire a “return of the Jedi”movement that pushes back against the ever-expanding Nanny State and its many permission slips.

Sandefur, who serves as vice president for litigation at the Goldwater Institute, argues that the problem with excessive government permissioning is that it “conflicts with the principle of equality, the basis of our Constitution, by regarding people not as equals to be respected but as subjects to be punished or rewarded—as children, not as mature citizens ultimately responsible for their own actions” (p. 49). We should enjoy the “presumption of freedom,” he says, because “the cost of having too much freedom is far smaller than the cost of having too little” (p. 9).

At least in the United States, we have come to see how problematic permissioning schemes are for freedom of speech, so much so that—with the notable exception of many college campuses—“prior restraints” on speech and expression are largely a thing of the past. As Sandefur notes, it took us centuries to gain many of these freedoms, and the battle is never really over despite recent victories. But for all the gains that have been made in terms of speech freedoms, we remain far behind when it comes to economic liberties, including the right to experiment with and enjoy new creations as well as to earn a living as we see fit.

He explains how “the permit system often makes it impossible to experiment, thus hampering the most important quality of free markets: the possibility of innovation” (p. 36). This limitation is particularly deadly for small entrepreneurs because “when told that they will have to undergo expensive and time-consuming permit processes before being allowed to pursue a new idea, many simply give up without trying” (p. 38).

Permitting systems are typically based on the very best of intentions—that is, a desire to improve safety, increase quality, lower prices, and so on—but they often have the opposite result, especially after complex regulatory systems get “captured” by special interests. That’s one reason why so many people have enthusiastically embraced sharing-economy innovators such as Uber and Airbnb, even as those companies did an end run around traditional state and local licensing laws. For the first time in decades, consumers are enjoying the price and quality competition that regulation promised us but failed to deliver.

Gaining a little more freedom is much more challenging for innovators operating in heavily regulated sectors such as health care, where permitting schemes are omnipresent. Sandefur documents how at the state level a labyrinth of licensing restrictions makes the practice of medicine far more complicated and costly. Particularly nefarious are state “certificate of need” requirements, which prohibit the formation and growth of new businesses unless bureaucrats—and even other competitors—give them their blessing to proceed. Meanwhile, at the federal level, the complex web of permissions spun by the Food and Drug Administration have led to interminable delays in the approval of new drugs and medical devices and have raised costs for consumers in the process.

Sandefur shows how such nannyism is at work in almost every sector of the economy, even for mundane businesses such as flower and moving companies. With each passing year, more and more human activity is ruled by the “permit system,” which proactively forbids freedoms until such time as the authorities deem them allowable.

To combat this overabundance of regulation, Sandefur hopes to reinvigorate the “nuisance system” of regulating behavior in a reactive or ex post fashion when things go wrong. Unfortunately, he doesn’t offer the reader much of a blueprint for how precisely to go about undoing the current mess we find ourselves in. Rather, he focuses mostly on documenting the dangers associated with the ever-expanding Permission Society, and he clearly hopes his book will serve as a wake-up call to the importance and enormity of the task at hand.

One way to win back a little of our lost freedom is to litigate. Sandefur has personally spearheaded many lawsuits against governments in an attempt to roll back the horizons of the Permission Society. Unfortunately, using the courts to reverse the tide is a slow-moving and sometimes extremely costly process. Sandefur also recommends legislative reforms aimed at constraining permitting systems or at least at limiting their continued growth. Yet, as he notes, overcoming the power of special interests and the policy makers who protect them will be challenging.

It would have been interesting if Sandefur had discussed the prospects of more innovators going rogue and adopting the approach that Uber and Airbnb have taken, which is essentially to ignore archaic permitting processes and offer new innovations to the public. Toward that end, in another recent anti–Nanny State manifesto, By the People: Rebuilding Liberty without Permission (New York: Crown Forum, 2016), Charles Murray proposes “a program of systematic civil disobedience underwritten by privately funded legal resistance to the regulatory state” (p. 17).

Following up on that proposal last year, my Mercatus Center colleague Eli Dourado and I proposed the creation of an “Innovator’s Defense Fund,” a nonprofit law firm or legal fund tasked with defending innovators whose entrepreneurial efforts are stifled by government permissioning. The idea would be to build a base of support for the Ubers and Airbnbs of the future that lack the resources to defend themselves when they flaunt outdated and inefficient regulations that make innovation and competition impossible without receiving prior approval.

Sandefur has already spent a lifetime engaged in such legal advocacy, but it’s unclear from his book whether he thinks innovators should take such a daring—but potentially perilous—approach. It might, after all, land some of them in jail or result in other significant legal or monetary sanctions.

Then again, had Uber and Airbnb not taken the path they did, would we even be talking about this sector and all these new innovations right now? It seems that only by thumbing their noses at the Permission Society and blazing their own trail were these firms able to gain the leverage to have a conversation with regulators on equal terms. They have, in essence, inverted the traditional permitting process and made good on Hopper’s rule that “it’s easier to ask forgiveness than it is to get permission.”

It helps that the pace of technological change has greatly accelerated in the digital era, making it much harder for regulators to preemptively bottle up new innovations. Meanwhile, what we might think of as “innovation arbitrage”—that is, innovators can increasingly move to jurisdictions that provide a legal and regulatory environment more hospitable to entrepreneurial activity—is also providing firms with greater leverage.

In late 2016, for example, San Francisco officials threatened action against Uber for deploying self-driving vehicles without getting prior blessing. Uber’s response was to bolt town and ship their fleet of robot cars down to Arizona, where the state’s governor and local regulators welcomed the firm with open arms. Thus, the combination of a bit of civil disobedience plus the reality of innovation arbitrage has made San Francisco’s permissioning system an increasingly irrelevant anachronism, except for the residents who must live with the absence of such innovations, of course. This same phenomenon is playing out in many other cutting-edge tech sectors, such as commercial drones, genetic testing, and Bitcoin.

Perhaps, then, the best way to counter the Permission Society is to encourage more innovators to attempt a complete end run around it and then be willing to defend them when they do. “It is the government that must ask permission of us, not the other way around” (p. 27), Sandefur insists. If so, then continuing to play ball by the old rules while petitioning governments for a bit more freedom seems like an exercise in futility. What better way to strike back against the Permission Society than to ignore it altogether? And then call Timothy Sandefur to defend us when we end up in court!