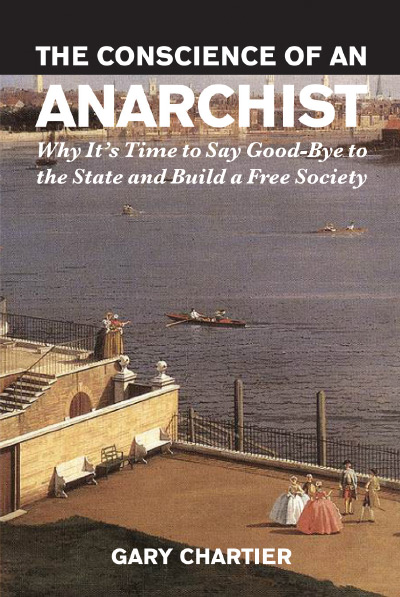 The Conscience of an Anarchist
Why It’s Time to Say Good-Bye to the State and Build a Free Society
Gary Chartier
Paperback
This book review appeared in the Winter 2011/12 issue of The Independent Review.

The word anarchist is made up of the denying prefix a- or an-, the root archon, meaning “king” or “ruler,” and the suffix -ist, referring to a proponent of a theory. So the anarchist is someone who thinks there should be no ruler. This claim is not identical with the claim that there should be no order, no authority relations, no rules, no logic, or no sociality. However, because the word is sometimes used in these senses, it inevitably causes some confusion. The subtitle of Gary Chartier’s new book makes perfectly clear what he means and what he does not mean: “society” is desirable, but “the state” is not. For most people, the idea of society without the state is counterintuitive, so it is important to make this distinction and to be able to explain it.

Libertarians’ and in general classical liberals’ basic approach to government runs as follows. It is good for people to have liberty (a premise defended variously on consequentialist, deontological, and teleological grounds). The state—centralized political authority—is necessarily coercive and hence represents a negation of liberty. Therefore, the state should be as small in scope as possible in order to allow the maximum amount of liberty—hence, the expression minimal state. For critics of this approach to government, anarchism aims at a reductio ad absurdum: the libertarian argument will inevitably lead one to the conclusion that there should be no state at all. For a reductio to be effective, the conclusion has to be contradictory or at least self evidently silly. But what if it’s not silly to argue that there should be no state? Anarchists accept the claim that the libertarian approach to thinking about the state leads to the conclusion that the state is not justified, but they claim that this result is not absurd. The anarchist ironically must defend this conclusion against both minimal- state libertarians and nonlibertarian proponents of expansive states. Doing so requires the anarchist to show that on balance the state exacerbates the problems it is supposed to solve. Gary Chartier has put a great deal of thought into such problems and does a thorough job of making this showing.

Chartier tells us at the outset that his book is not “a narrowly academic work in philosophy or economics or political science or history, though it’s informed by the results of inquiry in all those disciplines” (p. 2). Rather, he says, it is a “call to action: not to more violence that’s just the mirror image of the state’s own destructiveness, but to the creative work of envisioning a new kind of society and beginning to construct it here and now, right under the noses of the people in power” (p. 2). It is sensible for him to clarify at the beginning that the anarchism he supports is not the anarchism of assassinations and bomb throwing. We have seen footage on television of rioters who call themselves anarchists burning cars and smashing the windows of Starbucks coffee shops. We all learn in school that President William McKinley was shot by an anarchist. Yet these activists’ political positions are typically statist. Their “anarchism” is at best a way to oppose a particular state in the hope of replacing it with what by their lights would be a better state. Chartier is not duped by this facade, and he works to make sure his readers are not. Violence cannot eliminate the state, anyway. When King Louis XVI was killed, Robespierre assumed power. When President McKinley was assassinated, another president assumed power. The state’s continued existence does not depend on the particular holders of offices, but on the people’s conviction that they need the state. So the real anarchist’s task is intellectual, not violent: showing people that the state makes life worse.

Of course, some people recognize that the state causes problems, but they think it is a “necessary evil.” Chartier must show not only that the state is a bad thing, but also that it is not necessary, and he does so very well. The book’s six chapters proceed through the main conceptual stumbling blocks. In chapter 1, he argues that the state (in general, not any particular state) lacks legitimacy. In chapter 2, he shows that the state is not necessary. In chapters 3, 4, and 5, he argues that the state creates problems and makes existing problems worse. Chapter 6 is devoted to showing how “a stateless society would provide opportunities for people to explore diverse ways of living fulfilled, flourishing lives” (p. 3) and offers concrete suggestions for working nonviolently toward a freer society. Although Chartier claims that the book is not intended to be scholarly, he concludes it with an annotated bibliography of writings on anarchism so that people who want to learn more about the arguments can do so.

Chartier’s arguments are logically well structured and rhetorically effective. His writing style is clear and straightforward. People with a background in philosophy or economics will find the arguments interesting and not simplistic, yet any intelligent lay reader will find the book accessible. He uses analogies and rhetorical questions to good effect; he sometimes uses historical examples. He cuts through many of the common (but weak) arguments used to defend the state. For example, following John Locke, the authors of the Declaration of Independence claim that governments derive their just powers from the consent of the governed. This idea undergirds one notion of authority: if Smith and Jones enter into a consensual arrangement, even a hierarchical one, it is legitimate. It violates neither’s liberty because each agreed to it. When I agree to board an airplane, I cede to the pilot the power to direct the flight. When I agree to an employment contract, I give up my liberty to stay home and watch TV all day. But do we consent to the government? Most people do not actually do so (although immigrants who become naturalized citizens do), so statists argue that if a person continues to live in the area a particular government controls, his consent may be assumed. As Chartier points out, people may want to stay put for many reasons, and their doing so implies acceptance of the state’s authority only “if we’ve already established that the state actually has authority in the first place” (p. 8).

The argument that the state is a necessary evil assumes that we need some kind of order for society to work, which is true, and that social order cannot exist unless a central authority imposes it, which is false. Readers of this journal will be familiar with the notion of “spontaneous order” from the writings of F. A. Hayek. Without getting overly technical, Chartier invokes this notion to demonstrate that we can expect to establish the “order” on which sociality depends even without the state. He cites real-world examples of social cooperation that have evolved naturally, such as the development of international merchant law: as far back as the Middle Ages, the growing class of international merchants realized that they needed to have a reliable mechanism for resolving disputes that was not part of any one nation’s governance system, and so a self-governing set of institutions evolved. Another useful example he cites is that of the American West prior to 1885, where in the absence of state-controlled legal institutions, mining and ranching communities worked out their own institutions for recognizing property rights and for nonviolent dispute resolution.

Having shown that the state is neither necessary nor legitimate, Chartier goes on to explain why it is actually bad for people. In addition to its propensity for violating liberties, Chartier points out that the state takes on powers that harm its supposed beneficiaries. For example, some argue that we need the state to “redistribute” wealth from elites to the poor. But, Chartier claims, the state is largely responsible for the creation of these elites in the first place—for example, by granting monopoly rights to particular firms or by shielding an established group of firms from competition. He cites immigration restrictions, copyright law, occupational licensure, and control of money, in addition to the explicit creation of monopolies and cartels. In a way, then, Chartier says that the state is simultaneously robbing from ordinary people to create elite groups and robbing from the well-off to give something back to the nonelites. This cross-hauling causes a net destruction of wealth, besides enhancing and solidifying the state’s powers.

Of course, states want to increase their power, and Chartier devotes a chapter to one of the most destructive uses of state power: attacking other states. War making, whether by overt conquest or mere intervention, has the effect of strengthening the state’s power and simultaneously providing justification for the diminution of people’s liberties. Chartier uses examples from U.S. wars not because he wants to minimize the bloodshed caused by more tyrannical states, but precisely to highlight that even a state ostensibly committed to liberal principles can engage in massive destruction of life, liberty, and wealth when it waxes imperial. He also discusses metaphorical wars, such as the “war on drugs,” and shows how they, too, inevitably lead to violations of liberty on a massive scale (as well as to destruction of lives and wealth).

After five chapters of convincing argument that the state causes terrible problems for no justifiable reason, Chartier concludes with what he calls his “manifesto.” He believes we have the capability to move toward a freer world by taking certain steps. Learn about these issues and discuss them with others. Work to change smallscale institutions and create alternate institutions. Recognize that we cannot achieve any real diversity and pluralism with top-down mandates, but only with our own actions, and that we must lead bottom-up change by our own example. Engage in litigation and even in political actions that support pro-liberty, antistate positions. In his view, these actions can help to bring about a world without the state, “a better world, a world more free, more peaceful, more humane than the one we live in now” (p. 104).