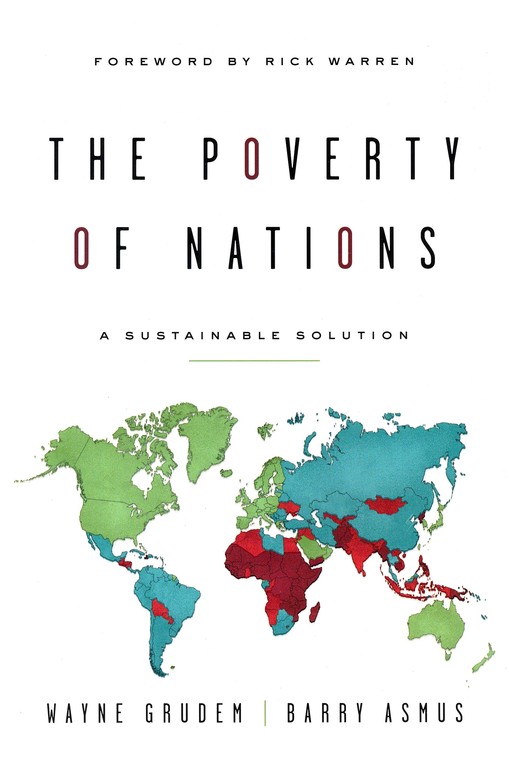 The Poverty of Nations
A Sustainable Solution
Wayne Grudem and Barry Asmus
Kindle Paperback Audiobook Audio CD
This book review appeared in the Summer 2015 issue of The Independent Review.

The goal of The Poverty of Nations is bold and ambitious. The authors present a series of steps or factors that can enable poor countries to escape poverty. The issue is not the poverty of individuals and how some individuals might be helped. Instead, the goal is to provide solutions to poverty at the national level. Barry Asmus is an economist, Wayne Grudem a theologian, and they collaborate on the belief that sustainable solutions must be both economically sound and supported by the Bible’s moral teachings. An appendix summarizes the book’s findings in a list of seventy-nine factors that would enable a country to pull out of poverty.

The organization of the book presents the authors’ argument. Grudem and Asmus begin by identifying the goal a nation needs to pursue—to increase production of goods and services. Then they identify some goals that others have suggested for helping poor countries and argue that these goals are ineffective. They claim instead that a movement to free markets will enable a nation to develop economically. They examine the mechanics of a system of free markets and what governments can do to help implement and protect markets, and they identify the values free markets rely on that can aid in achieving this goal. The authors write in a nontechnical way and utilize quotations from various authors and the Bible to support their case. Most of the sources cited are books and articles written for the general public rather than for specialists. For example, Daron Acemoglu and James A. Robinson’s book Why Nations Fail: The Origins of Power, Prosperity, and Poverty (New York: Crown, 2012) is cited often, but their articles in the scientific journals are not.

The first chapter identifies the goal a nation must have if it is to solve the problem of poverty. The goal is to increase per capita income, which implies the nation must find a way to produce more goods and services. Grudem and Asmus reject a number of other paths that some suggest can alleviate poverty—increased aid, greater income equality, and debt forgiveness, among others. They go into greater detail on why these paths are wrong and why they will not help a nation develop economically. For instance, foreign aid leads to dependency, and income redistribution is unproductive when the resulting higher incomes are due to the provision of goods and services of value to people. The authors reject the idea that poverty in nations today can be directly linked to exploitation by the West or to colonialism. In some cases, colonialism contributed to economic problems, but in other cases, especially some of Britain’s colonies, the colonial power provided infrastructure that supported greater economic development.

After discussing the wrong goals, Grudem and Asmus examine economic systems that fail to lead to prosperity. They review eight economic systems that have been used in human history—hunting and gathering, subsistence farming, slavery, tribal ownership, feudalism, mercantilism, socialism and communism, and the welfare state and equality. They state, “Unfortunately, none of these systems ever opened the door to really significant economic growth or permanent poverty reduction” (p. 109). Although few would argue that subsistence farming or feudalism would be effective in reducing poverty, there are many who might question the inclusion of the welfare state as a wrong system. The authors claim, “We must recognize that the wealth of European countries was created under structures much like free-market systems, not under the modern welfare state” (p. 127). They further argue that “the main pillars of the European welfare states are no longer viable” (p. 128).

Grudem and Asmus’s main solution to poverty is the free-market system. They try to define it in a way that differentiates it from undesirable forms of capitalism, such as “crony capitalism,” “state capitalism,” and “oligarchic capitalism.” The authors claim that the free market is a God-given process that generates a supply of goods and services that match the goods and services demanded by society. They see the providence of God in the operation of the free market.

Grudem and Asmus admit that all economies are mixed to some degree—a purely free-market economy does not exist. However, some nations are closer than others to a true free market. The first characteristic of a free-market economy is reliance on the rule of law, with well-defined property rights protected by the government. The importance of property rights is emphasized throughout the book, supported by the writings of economists, political theorists, and the Bible—especially the Eighth Commandment, “thou shalt not steal.” The authors also argue that two essential factors a government must ensure are a stable currency and low tax rates.

The fifth chapter concerns the mechanics of a free market. The emphasis on specialization of labor and the signaling function of the price system can be found in the writings of most “free-market” economists. The sixth chapter is different, though;

here the emphasis is on the system’s moral advantages: promoting personal freedom as well as the freedom for abstract or spiritual pursuits; promoting personal integrity, honesty, and personal accountability; moderating selfishness and greed; and promoting interpersonal virtues as well as societal virtues. Critics of free-market systems will take issue with some of these claims. For example, they might dispute the claim that the free-market system promotes the wise use of the environment or the claim that free markets curb materialism. But the authors do offer evidence to support each of their claims.

Grudem and Asmus are trying to influence leaders in poor countries. They include a chapter on the government of a free-market system and how leaders can use their power to benefit the people as a whole. Many of the factors they detail are consistent with the U.S. Constitution and the legitimate roles of government offered by Adam Smith and Milton Friedman, including separation of powers, a limited role for the government, protection of property, the provision of a patent system, and the provision of both national defense and protection at home. Some factors are obvious but difficult to implement—for example, avoidance of civil wars. In sub-Saharan Africa, civil wars, terrorist groups, and conflicts over resources such as diamonds and oil make it extremely difficult for a government to promote economic growth for a nation.

The penultimate chapter discusses essential liberties for economic growth. There are redundancies in the factors government should implement and the liberties that should be promoted. For example, Grudem and Asmus say that governments should encourage mandatory universal education in one chapter and should protect the freedom for all people to be educated in the next chapter. The final freedom discussed in this chapter is freedom of religion.

Religion continues to be a major focus in the final chapter, which discusses the values societies need for economic growth. The authors list several values under the heading “Beliefs about Religious Matters.” For example, the cultural belief that there is a God who holds people accountable for their actions also encourages economic development. In total, thirty-five potential cultural beliefs are discussed, with the last one claiming that a society should consider spiritual well-being and a relationship with God as more important than material goods or material wealth. Taken as a group, the implication is that Christian, Jewish, and possibly Muslim nations have the spiritual resources to develop economically, but Hindu, Buddhist, or atheist nations do not. The authors began the book stating that they are taking a Christian perspective on their topic, and their emphasis on religion is spread throughout the book.

If Grudem and Asmus are “preaching to the choir,” then as both a free-market economist and a Christian I am a member of the choir. They address their book to Christian leaders in poor nations, so their purpose might be seen as trying to persuade those leaders to adopt a free-market perspective and to actively promote the steps Grudem and Asmus provide in the book. However, to be ultimately successful, their message needs to confront people who are not in the choir. Further, I don’t think their arguments necessarily will persuade Christians who are skeptical of free-market economics to convert easily to that system.

As I noted earlier, Grudem and Asmus claim that the free market is a God-given process, and they see free markets and limited government as supported in the Bible. But Christians during much of European history thought the Bible supported the divine right of kings. There are both pro-monarchy and antimonarchy passages in the long narrative from Joshua to II Kings. As the authors note, there is support of private-property rights, but the property rights associated with the main productive resource of Ancient Israel—agricultural land—were attenuated by regulations such as sabbatical years and the Jubilee. There are numerous voices in the Bible, and not all of them point to free-market economies and democratic government. The authors overstate their case, which may turn off many Christians who are not already advocates of free markets.

Grudem and Asmus often acknowledge in the book that the process of creating economic growth is complex and requires many dimensions. Their composite list of seventy-nine factors that will enable a country to develop economically relate to the economic system, government, freedom, and values. Yet my impression when I finished the book and looked at the appendix is that the process should be really fairly easy—just implement the suggestions, the authors imply, and all will be fine. Although I agree with most of the items Grudem and Asmus identify as important, actual implementation will be difficult and will require the elites who run many countries to alter their behavior in ways that may not be in their personal self-interest. I am skeptical about the likelihood that such changes in behavior will occur. I hope my skepticism is misplaced.