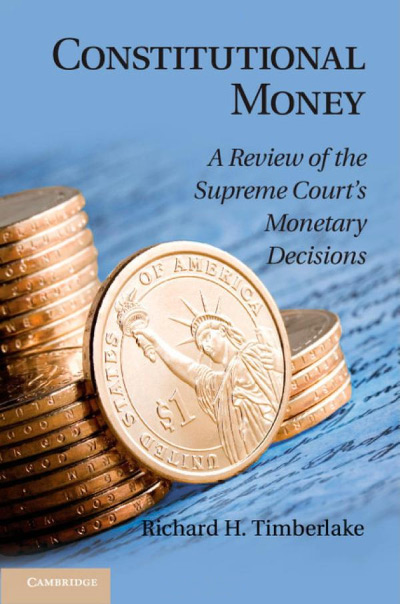 The recent financial crisis has led macroeconomists and monetary economists to reconsider their first principles. One tradition of monetary research receiving more attention, arguably tracing its intellectual heritage back to Henry Simons (“Rules versus Authorities in Monetary Policy,” Journal of Political Economy 44 [Winter 1936]: 1–30), looks for economic stability by bringing monetary policy under the rule of law. This tradition is concerned with the “constitutionalization” of money—creating binding rules for the monetary authority that the monetary authority itself cannot change, as in James Buchanan’s recent formulation (“The Constitutionalization of Money,” Cato Journal 30 [Spring–Summer 2010]: 251–58]). Much of this work is institutional-theoretical analysis, as in Alexander Salter’s approach (“Is There a Self-Enforcing Monetary Constitution?” Constitutional Political Economy 25 [Fall 2014]: 280–300): it uses comparative institutional analysis to predict how particular monetary institutions will affect economic stability. Less has been done in recent years in the empirical-historical line of research: exploring how actual monetary constitutions, formal or informal, have performed. Richard Timberlake’s new book Constitutional Money is a valuable contribution to this latter line of research, both in itself and as a complement to the work in the institutional-theoretical line.

The book is structured as an alternating presentation of the U.S. Supreme Court’s decisions in cases relating to the constitutionality of money and Timberlake’s commentary on these decisions. Timberlake is explicit in the normative premise behind his presentation. To him, Article 1, section 8, of the U.S. Constitution clearly limits the federal government to coining commodity money, and section 10 clearly prevents the several states from utilizing any monetary powers, which includes legal-tender laws (p. 1). As such, he sees current monetary arrangements in the United States—fiat money backed by legal tender laws—as blatantly unconstitutional. In contrast, Timberlake praises the early U.S. bimetallic system, where both gold and silver (or claims to gold and silver) were legal tender. He is well aware of the difficulties of defining the medium of exchange in terms of two commodities as opposed to one—anytime the relative market price of gold to silver diverged from their fixed-dollar values, arbitrage behavior could potentially result in a specie drain, which might impugn the integrity of the standard—but he argues that such a system was necessary for reasons of liquidity and that Congress, in its constitutionally granted capacity, might periodically redefine the gold–silver exchange ratio to reverse any specie outflows (pp. 12–15).

The book’s presentation of Supreme Court decisions and Timberlake’s commentaries on those decisions proceed chronologically. Timberlake immediately takes issue with the Marshall court’s decision in McCulloch v. Maryland (17 U.S. 316 [1819]), arguing that the Court’s endorsement of the Second Bank of the United States “violates the entire spirit in which the Constitution was written and ratified” (p. 26). Indeed, the overarching message of Timberlake’s narrative concerns the gradual erosion of any meaningful check on the government’s ability to fiddle with monetary institutions. Regarding the remainder of the pre–Civil War decisions, Timberlake expresses mild exasperation at the Court’s decision to grant the federal Bank of the United States privileges not extended to similar organizations on a state level. These decisions, he comments, “reflected the tendency of the Marshall Court to tolerate and even approve an approach to constitutional principles that favored the power of the national government relative to the power of state governments” (p. 55).

The next series of cases, immediately following the Civil War, concern the constitutionality of federally issued greenbacks—legal-tender paper money, issuable indefinitely, used to finance the Union’s war efforts. The most interesting cases involve then chief justice Salmon P. Chase and the constitutionality of greenbacks. Hepburn v. Griswold (17 U.S. 603 [1870]), the first case to consider the greenbacks’ constitutionality, stands out in particular. Prior to his appointment to the Court, Chase served as Treasury secretary under Lincoln and was instrumental in establishing the legitimacy of congressional acts that allowed for the creation of greenbacks. However, as chief justice, Chase changed his mind and successfully argued against the constitutionality of greenbacks. Unfortunately in Timberlake’s eyes, the decision rendering greenbacks unconstitutional in Hepburn v. Griswold would be overturned in Knox v. Lee and Parker v. Davis (79 U.S. 457 [1871]). Timberlake clearly takes issue with the notion of “sovereignty,” a curious concept the courts relied on in handing down their reversals of Hepburn. Timberlake rightly notes that there is nothing in the Constitution’s monetary clauses relating to this concept, and he devotes significant space in subsequent chapters to demonstrating that the notion of sovereignty on which the courts relied is constitutionally dubious at best.

The next chapters discuss post–Civil War banking, during the period that is now called the “National Banking era.” Resumption of gold payments (redemption of banknotes) began in January 1879. Timberlake regards this resumption as a “remarkable political achievement” (p. 117) because, due to relative price fluctuations of gold and silver on world markets, it required the federal government to tolerate a moderate amount of deflation in order to reach the desired parity. During the period preceding the Federal Reserve Act of 1913, the Treasury perceived itself to be “the official manager of fiat currencies” and exercised “guardianship of the gold standard” (p. 157). (Why Timberlake describes this money as “fiat” money, when it did have some commodity backing, is unclear. The most obvious explanation is he is using the term fiat here as a synonym for paper.) The gold backing of U.S. currency, which included all government-issued paper, was affirmed in the Currency Act of 1900. At this point, concerns over the U.S. monetary system became focused on the “elasticity” of the currency—that is, its lack of responsiveness to the needs of trade, which did much to propagate the series of financial panics the United States experienced in the decades leading up to the creation of the Federal Reserve. Indeed, the Federal Reserve Act was initially seen as merely a nationalization of the interbank clearing mechanism for the purpose of facilitating ordinary liquidity flows between member banks during times of financial turbulence. The idea of “monetary policy” in anything approaching its modern form was inconceivable.

Of course, the Fed quickly morphed into another creature entirely. In the 1920s, it stepped beyond its congressional mandate of providing for an elastic currency and serving as a facilitator of last-resort lending to stave off financial panics. Timberlake recounts, in a tone of obvious disapproval, how the Fed began purchasing government securities “to furnish themselves [sic] with some much needed interest income” (pp. 168–69). Of course, the role of the Fed’s actions, influenced by the now discredited Real Bills Doctrine, in precipitating the 1929 crash and the ensuing length and severity of the Great Depression is well known to monetary economists.

Timberlake closes with a recount of the Gold Clause Cases, which centered on the Franklin Roosevelt administration’s outlawing of private gold holdings. As expected, he has little positive to say about this incident.

The final chapter is an outline for returning to truly constitutional money, including a return to a genuine (i.e., free of central-bank interference) gold standard. The normal monetary operations of the banking system, not the Fed, should have the power to create and destroy money. Only then would we have a truly constitutional and hence rule-bound monetary system.

Timberlake’s treatment of history is careful, and his economic analysis is sound. I have only two quibbles. The first is with his discussion of bimetallism. Although his account is the most sophisticated I have seen, I believe he exaggerates the degree to which the Treasury can accurately adjust the gold–silver redemption rates to prevent a specie drain when the pegged dollar price differs from the world relative price. The second lies in a particular aspect of his proposed solution. After spending nearly two hundred pages of detailed analysis showing that political authorities cannot be trusted to manage a monetary standard in the interest of the common good, Timberlake proposes a return to a strict constitutional interpretation of Congress’s monetary powers. This proposal is to be expected, however, because his narrative centers on the dangers of rescinding the Founders’ understanding of constitutional money. Although Timberlake’s policy recommendations are appealing and mirror Lawrence White’s proposal (“Making the Transition to a New Gold Standard,” Cato Journal 32 [Spring–Summer 2012]: 411–21), I believe the idea of constitutional money is largely chimerical. The possibility of unleashing the printing press is far too tempting for politicians to be allowed even a modicum of monetary authority. I instead prefer a complete separation of money and state. Of course, there is no guarantee that my desideratum would remain self-enforcing over time, either. But as long as we are considering radical monetary reforms, and given the verdict of history is that laissez-faire banking systems are indeed viable (e.g., Lawrence White, Free Banking in Britain: Theory, Experience, and Debate, 1800–1845 [Cambridge, U.K.: Cambridge University Press, 1984]), then demanding truly market-regulated money seems to be a weakly dominant strategy.