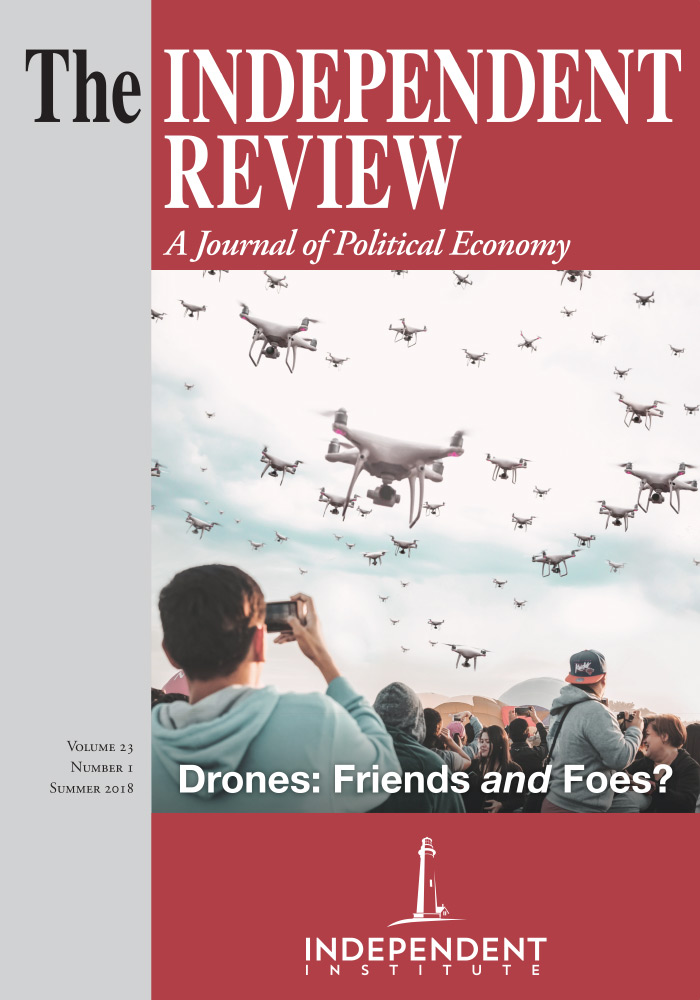 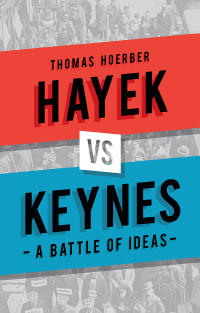 Hayek vs Keynes
A Battle of Ideas
Thomas Hoerber
Kindle Hardcover
This book review is a web exclusive for the Summer 2018 issue of The Independent Review.

To communicate the significance of two intellectual giants who were largely opposed to one another is no simple feat. It is precisely this task that is taken up by Thomas Hoerber. Hoerber is not an economist by training. He earned his Ph.D. in European studies. The author states from the outset that “the purpose of the following analysis is to get an idea of the current relevance of their two major studies as economic theories” (p. 7). The search for relevance to modern policy conversations takes precedent in the study. This is apparent in a rather thin characterization of Hayek’s intellectual perspective as well as a thin defense of the author’s normative assumptions that appear throughout the book. Hoerber’s conception of arguments from Hayek and Keynes divide between economic anarchy, that is markets unrestrained without regulation of any kind, and state interventions aimed at making the market operate more efficiently and equitably.

Hoerber believes that Hayekian thought is the bedrock of neo-liberalism. His understanding of Hayek is as hazy as his definition of neo-liberalism, the latter of which seems to be whatever marriage of political and economic systems that pervade modern society at the moment. Such a modern perspective is aided by the apocryphal story of Margaret Thatcher slamming down Hayek’s Constitution of Liberty, saying, “This is what we believe.”

In his presentation and support of what he thinks of as Keynesian policies, the author does not consider the incentive and knowledge problems that pervade intervention into the economy. He assumes that intervention is efficacious and necessary:

Today, a crisis of these dimensions [like the in the Great Depression] could bring down the real economy of the whole world. Such a risk is clearly unacceptable. Some moderation of the most libertarian tenets of liberalism . . . seems to be in order. . . . The feeling of injustice accounts for much of the motivation of those who argue that Keynesian economics must be given another try. Hence we may well see the introduction of some Keynesian elements as regards foresight, planning and responsibility, for example in the EU, which already in some areas favours redistributive solutions and the development of an economic framework ensuring equal access to markets. There we find the spirit justice, of ‘fair play,’ which may well lead in the future to a strengthening of redistributive policies. (pp. 119, 125)

Thomas Hoerber oscillates back and forth between a sympathetic characterization of Hayek and a reductionist one. In one case he reduces Hayek as valuing only markets and prices as means for social coordination. According to Hoerber, “the question of how all of human (economic) action works together” was, for Hayek, “the market and its unique capacity to determine the ‘right’ price” (p. 42). While the author, at other points, recognizes Hayek’s emphasis on the rule of law, he shows himself to be ignorant of the influence of Hayek’s methodological apparatus on conclusions drawn by Hayek. The author shows his ignorance early in the book, as he claims that, in “Economics and Knowledge,” Hayek “demanded more objectivity through the introduction of logic and mathematics into the discipline of economics.” He adds that “The Road to Serfdom does not reflect at all this tendency to formalization in economics” (p. 14). While it is certainly true that Hayek would have been amenable to an improvement in the math used to convey economic theory, as argued by Nicolaas Vriend, the logical roots that Hayek refers to in 1937 and developed in his work over the next three decades are more nuanced than the author recognizes. These elements are generally present in Hayek’s later work, including The Road to Serfdom. For example, Hayek’s Sensory Order provides a framework for conceptualizing human understanding, and therefore learning. He preempts this framework with earlier methodological work and follows this with work on rule-based perception and communication, the inherent incompleteness of social theory, and learning across society. None of these works are cited by Hoerber.

Hoerber also mistakes Hayek’s political theory for an ideological one:

There can thus be no doubt as to the fundamental difference between communists and socialists in basic attitudes towards political values, such as democracy and economic policy. Hayek ignores this fact . . . His blind spot here might also be seen as an indication that ideological tensions, such as in the Cold War, can make even the strongest minds—to which group there is no doubt that Hayek belongs—distort evidence to fit a nice ideological theory . . . To lose sight of the differences between socialists and communists risks making reality fit ideology, and this has inevitably undermined the forcefulness, even the plausibility, not just of Hayek’s theory of totalitarianism, but of his work taken as a whole. (p. 97)

Hayek’s mistrust of all state expansion not tightly bound by rules derives from a Weberian conception of the state as the legitimized monopoly on the use of force. We see this evidenced in the first chapter of The Constitution of Liberty where he refers to the force embodied by the state as an “evil.” This evil is unavoidable, but rules can limit and even transform it into something good. What appears for the author to be Hayek’s “blind spot” turns out to be a blind spot for Hoerber himself.

Hoerber’s characterization of Keynes is less problematic, though not perfect. He is comfortable with the political implications of Keynesian theory as it offers a justification for state intervention. In short, he correctly concludes that Keynes believed that market regulation of the interest rate was broken and that financial markets do a poor job of fully utilizing potentially productive resources. This underemployment of resources includes unemployment of workers. This underemployment is best remedied, according to Keynes, with deficit spending by the state that is accommodated by monetary expansion. On this point, however, there is some confusion by Hoerber as he lacks in-depth knowledge of the history of economic thought. Keynes was not unique in his claim that monetary expansion might offset a shortfall in total expenditures. Keynes believed that unstable demand for money during a deep depression would make monetary policy insufficient on its own, and therefore the government must spend money newly created by the central bank in order to offset a shortfall in total spending that is depressing national income. Economists Ralph Hawtrey, Gustav Cassel, and even Hayek (from a theoretical standpoint) understood that a fall in the rate of expenditures could be offset by an expansion of the money stock (in theoretical terms, a fall in money’s average velocity is offset by an increase in the quantity of money). Where these economists disagreed with Keynes is that the new money will be spent and invested if placed in the hands of private actors. Thus, it is not correct to view belief in the efficacy of moderate monetary expansion as having its origin in Keynes. In some sense, this misunderstanding is not totally the fault Hoerber as Keynes represents himself as being truly innovative in The General Theory. A deeper search of the subject, including the secondary literature that has accumulated for many decades, would have corrected such a misunderstanding.

The failure of the liberal market economy during the Great Depression made Keynes ask how it could have come to this, where a failing economic model had become the dominant, if not the only, economic model.

The author takes the normative implications of Keynes’s framing at face value. He adopts a simplistic explanation of depression in the final chapter: greed.

A boundless desire for greater and greater wealth has been shown as one of the less savoury elements of liberalism, an element that may still have been acceptable in the eighteenth century ... By the end of the Second World War it had become less acceptable—one of the reasons for which was precisely a financial crisis, leading to the Great Depression. (p. 119)

Sophisticated analyses of the Great Depression have shown it to have been caused and/or deepened by a lack of coordination between central banks that led to mismanagement of the gold standard (as described by Barry Eichengreen, David Glasner, and Scott Sumner), price fixing and labor restrictions (described by Richard Vedder and Lowell Gallaway), and high tariffs (described by Douglas Irwin and Thomas Rustici). As Ben Bernanke famously stated in a speech at Milton Friedman’s ninetieth birthday in reference to tight monetary policy by the Federal Reserve more than half a century earlier: “Regarding the Great Depression. We did it. We’re very sorry. But thanks to you, we won’t do it again.”

Although Hoerber’s work is interesting, its historical errors and analytical shortcoming prevent it from usefully contributing to the conversation concerning these two great figures as well as conversations into which their debate breathed life. We are left with a book that conveys conceptions particular to the author and attempts to relate these to the modern policy conversation. While they might prove useful for the author’s narrative, these conceptions are not well supported.