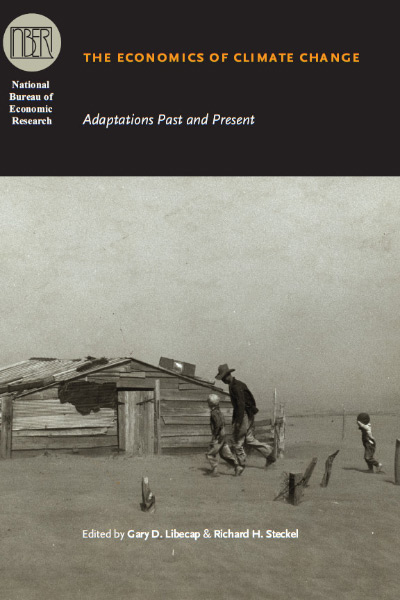 The Economics of Climate Change
Adaptations Past and Present
Gary D. Libecap and Richard H. Steckel
Kindle Hardcover
This book review appeared in the Summer 2014 issue of The Independent Review.

This important book is largely a response to the much-heralded reports of the Intergovernmental Panel on Climate Change (IPCC), the organization created by the World Meteorological Organization and the United Nations Environmental Program in 1988. The IPCC’s reports have received extensive attention from both the press and environmental groups and have increasingly turned toward human activity (such as the use of fossil fuels) as the cause of warming, with the implication that preventing this change is a key policy goal.

But as its title suggests, this volume focuses not on the causes or prevention of climate change, but rather on evidence of how costly (or inexpensive) it would be to continue our history—laid out well in the book—of adapting to climate change. The authors use the perspective of economic history to help us understand how adaptation can be done in the present and future by examining how it was done over the past century or so. To the extent that successful adaptation is not very difficult or costly within the range of predicted climate changes, these climate changes should be much less problematic going forward than many have suggested.

In contrast, adaptation not only shows promise but is a process that has been going on in response to changing climate for centuries—and probably for millennia. The fact is that regional changes in climate have been seen in many parts of the globe over the past century, and people living in those regions, especially farmers, have adapted. Some of those adaptations are recorded and analyzed in this book.

Libecap and Steckel suggest that as people learn more about how others deal with widely differing climates around the world, learning and adaptation will occur more rapidly, more effectively, and more inexpensively. As climate predictions and adaptive technologies have improved with each passing decade—more rapidly over time, especially in agriculture—changes in climate (the ones delivered by nature) have caused fewer surprises and less harm to humans.

Six of the eleven chapters deal with agriculture, which the editors conclude “was amazingly adaptive through new crop types, mixes, and methods of cultivation” (p. 12). For such adaptation to continue, these authors say, one essential ingredient is that governments allow and encourage the research and experimentation, especially in agriculture, that make adaptation possible.

To make their case, the authors of individual chapters marshal an impressive variety of evidence to show that individuals and communities have reacted successfully to actual climate impacts such as long periods of drought. For example, John Landon-Lane, Hugh Rockoff, and Richard Steckel analyze the impact of drought on bank failures and bank equity in two separate periods of stress—Kansas in the late nineteenth century and Oklahoma in the 1930s. In the early period in Kansas, drought hit the entire economy severely. The authors find, however, that in Oklahoma in the later period (the devastating and much more famous Dust Bowl) only small state banks suffered seriously; national banks spread their risk by making loans across wider geographic areas. Losses in one or two states could then be offset by surpluses from their branches in other regions. Also, after 1940 the link between weather and economic devastation weakened considerably. As the editors summarize the findings in this chapter, there was “considerable adjustment through institutional changes via branch banking that allowed banks to better sustain localized drought-induced economic stress and through agricultural adjustments through a shift to new crops and new production methods” (p. 15).

Another illustration of agricultural adaptation is found in the chapter on hybrid corn by Richard Sutch. To some extent challenging an important 1957 study by Zvi Griliches, Sutch says that the adoption of hybrid corn before the drought of 1936 was a slow and complex process—less straightforward than Griliches had argued. But the 1936 drought changed that. Farmers discovered that hybrid corn was different—it could tolerate drought. That discovery accelerated its adoption in areas prone to drought. Thus, the chapter illustrates the interrelationship of stress, such as climate change, and learning and adapting.

Can government intervention help adaptation? The book has a couple of chapters suggesting that some government intervention can be beneficial. For example, the chapter on water infrastructure by Zeynep Hansen, Gary Libecap, and Scott Lowe shows that the U.S. federal government’s twentiethcentury investment in dams and canals in the West helped farmers adapt to changes in climate. Those counties with more water storage and distribution facilities were better able to deal with varying periods of drought and excess precipitation.

This detailed book—replete with numerous graphs, tables, and equations—brings to bear the relevant historical statistics with clear explanations about what they mean, as the best economic historians so often do. Moreover, the authors make the content so compelling and the editors have underscored the points so well that the book is accessible to a large number of potential readers, not just to economists. If you are concerned about how the nation can best deal with climate change, this book can help you rest assured that people—the actors in the historical American economy—who have been allowed to adapt have been able to do so quite successfully and will continue to do so unless they are thwarted by governmental limits on their actions.