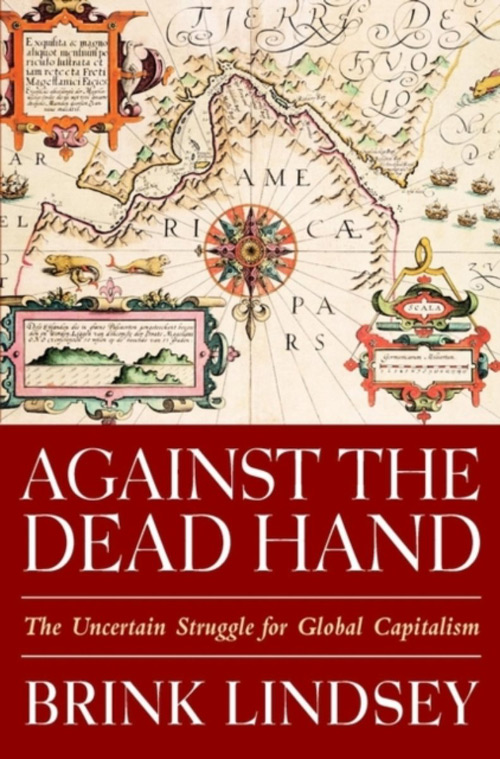 Against the Dead Hand
The Uncertain Struggle for Global Capitalism
Brink Lindsey
Hardcover
This book review appeared in the Spring 2003 issue of The Independent Review.

Today it is visceral for the ordinary citizen to see economic globalization as a relentless and irresistible force shaping political, social, and especially economic conditions throughout the world. Sovereign governments, we have come to believe, are increasingly passive respondents to the initiatives of international capital. Brink Lindsey, however, challenges the new consensus in his sweeping book Against the Dead Hand: The Uncertain Struggle for Global Capitalism. He portrays globalization as a kind of wholesome vacuum filler, the vacuum having been created by the loss of credibility and authority of statism and collectivism, the regnant economic and political doctrines in the world for most of the twentieth century. Near-universal statism, he maintains, choked off the naturally expansive impulses of capital, the precedent for which was the explosion of the world economy in the half-century or so before World War I. He claims that blame for the interwar implosion of the world economy lies with statism and collectivism. He sees the future as a struggle between forces of globalization—a liberal world order, that is—and the remnants of statism, giving the nod to liberalism in this contest because of its successful record in promoting economic welfare, in contrast to the proven failure of statism and collectivism.

Lindsey’s thesis is grounded in extensive knowledge of the economic history of the modern era. He starts blandly, stating the consensus view that the Industrial Revolution made possible an unprecedented degree of international integration by means of plunging transportation and communication costs in the second half of the nineteenth century. Then, becoming boldly original, he identifies a nasty by-product, the rise of a widespread engineering attitude toward economics and a concomitant faith in technology and science as the engines of economic progress. This belief, he claims, in turn fostered faith in top-down control and central planning as the appropriate means for encouraging economic development. The results at the political level were a set of policies and programs that he labels the Industrial Counterrevolution. Generally speaking, this sensibility was conducive to a collectivist or at least nonliberal social order because social institutions and the rule of law were deemed at best secondary or at worst irrelevant in promoting economic progress, which was viewed as a mere engineering problem. Following from the ascendancy of collectivism, however, was the death of the cosmopolitan vision of free trade and international peace because they came increasingly into conflict with national goals and group solidarity but were not perceived as critical to national prosperity. Thus, during the interwar period, the old international system met an untimely end when confronted with a variety of challenges, including new political realities, inflation and debt in various countries, and ultimately the Great Depression.

Yet, in spite of collectivism’s intellectual and political victories, says Lindsey, a partial recovery of the liberal international order under the leadership and inspiration of the developed countries of the West (plus Japan) ensued during the postwar era, leaving an international economy in which a number of countries sought autarky and isolation, whereas others aided and abetted the international division of labor. This dichotomy persisted until the 1980s, when the counterrevolutionary ideal became exhausted and extensive links with the market were forged by China and other countries that formerly had practiced import substitution or other statist nostrums. These reversals of policy ushered in the modern era of globalization and were, Lindsey implies, a necessary condition for it. Should a return to previous policies occur, globalization would retreat, not prevail, as the modern consensus seems to imply it will. Lindsey discusses the likelihood of such a retrenchment in the final chapter of the book, concluding on a note of guarded optimism about the prospects for continued liberal reform. The grounds for hope are the shortage of viable alternatives to a market order and the proven success of markets.

I judge this book a qualified success because of its fresh and carefully argued perspective on economic globalization. It is surely true that restrictive official policies hinder commerce and that the universal prevalence of such restrictions will contain global capital flows. Conversely, the widespread removal of these restrictions will unleash trade and capital flows on a grand scale. To recast the issue, discarding the “globalization uber alles” approach is an indispensable service.

Still, certain aspects of Lindsey’s economic history may not stand up to scrutiny, and his categories do not always work. The concept of an Industrial Counterrevolution, for example, seems to me reductive. Perhaps technological developments accompanying the Industrial Revolution promoted a global sensibility or tendency toward collectivism, but it seems reckless to attribute so much to those developments, especially the implosion of international commerce during the interwar period. Loss of faith in markets certainly is attributable in large part to the Great Depression, a macroeconomic event not naturally subsumed under the rubric Industrial Counterrevolution. This concept, in my opinion, is useful up to a point, but economic historians might fault Lindsey for overreaching in trying to explain the retrenchment of globalization during much of the first half of the twentieth century in such terms.

A methodological point of considerable significance is Lindsey’s use of qualitative evidence to show that statism refuses to die and is defended everywhere by vested interests and laws that are difficult to change, making the struggle between the dead hand and the invisible one a momentous issue of our time. Although Lindsey is correct to assert that the dead hand remains with us, it is nonetheless difficult to form a clear picture of the extent, strength, or influence of the past from his discussion. Just how evenly matched are the invisible hand and the dead hand? Lindsey thinks the invisible hand has the advantage, but for his argument to matter the forces of past and future must match up closely. Such is Lindsey’s tacit premise, but his purely qualitative or semianecdotal evidence cannot be definitive on this point. I suggest, then, that interested parties consult the economic freedom indexes available from the Heritage Foundation and the Fraser Institute as well as the analysis of them published recently in this journal (see John R. Hanson II, “Prosperity and Economic Freedom: A Virtuous Cycle,” The Independent Review 4 [spring 2000]: 525–31). Some may conclude that Lindsey has underestimated the problem of the dead hand for large areas of the world. Appreciation of just how far the planet is from free-market nirvana makes clearer the dimensions of the struggle between the invisible and dead hands than Lindsey is able to do with the qualitative evidence he presents.

It is incumbent upon Lindsey, therefore, to show more carefully than he does that free-market forces have the stronger hand to play. His argument in one brief—indeed, cursory—chapter is merely that no viable alternative to markets exists as a macroeconomic organizing principle, so that the triumph of liberalism sooner or later must arrive despite stubborn and effective resistance from the forces of the dead hand. This conclusion assumes a certain degree of rationality and pragmatism on the part of the world body politic that some, including me, might not yet be willing to grant. Latin America, for instance, appears to be reconsidering the market-favoring attitudes—known sometimes as the Washington consensus—that have informed economic policy there for the past decade. It therefore would be better to argue from experience to predict the future or at least to suggest the most likely possibilities. Are there, in other words, any historical grounds to believe that national choices of markets or of something else have systematic determinants—a model, if you will? Had Lindsey asked and answered this question, he might have argued his case differently.

Karl Marx, for example, thought capitalism’s downfall was a function of income, though he did not put it so. Today the popular (and opposite) view is that markets are at risk when they do not deliver prosperity or when times worsen under a market-based regime. My article “Prosperity and Economic Freedom” shows that during the late twentieth century income growth and liberalization of policy were correlated positively at the national level. The fact is, however, that although unhampered markets normally deliver prosperity, there are no guarantees. Moreover, the forces of the dead hand have the means to undercut the market system through rules, regulations, mandates, and so forth. The collectivist trick is to hamstring markets and then blame the resulting problems on market failure. Lindsey, admittedly no Pollyanna, unfortunately does not assess more carefully—measure, if you will—the strength of the hands liberals and collectivists respectively have to play in today’s world using theory or evidence about the process of national regime choice. Had he done so, he might have described even more convincingly than he does the current scene and the challenges facing globalization in the future.