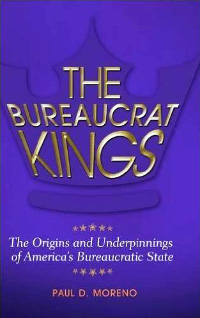 The Bureaucrat Kings
The Origins and Underpinnings of America’s Bureaucratic State
By Paul Moreno
Kindle Hardcover
This book review appeared in the Spring 2018 issue of The Independent Review.

Historian Paul Moreno has written an excellent book for those who seek a better understanding of social forces that led to the development of a fourth branch of the U.S. government—the administrative state, which regulates life in America—and for those who hold out hope for a strengthening of the constitutional order. I call the book excellent because, first of all, it is well written; it is a pleasure to read. Second, it is creatively organized and thereby provides the reader with a discussion of the combination of historical and political economy forces that produced three large waves of regulatory activity. And, finally, it is well researched and heavily documented. It is definitely not a polemic, but the author’s normative values do shine through. I note that the footnotes and references provide a network of avenues for further education on the topic.

But in a meaningful way this short book is more than all this, for it provides philosophical interpretations of competing notions that played through the nation’s founding, the development of constitutional bedrock, and later modification if not obliteration of important constitutional constraints.While enjoying the story, the reader will encounter Hegel, Napoleon, Tocqueville, as well as Washington, Adams, Hamilton, and then Wilson, Reagan, and a score of other major figures and players whose actions and thoughts influenced the evolving nation-state.

After my first reading, it occurred to me that The Bureaucrat Kings is an excellent companion to Bruce Ackerman’s book The Decline and Fall of the American Republic (Cambridge, Mass.: Belknap Press of Harvard University Press, 2010). Ackerman describes major institutional changes that have enabled the concentration of political power in the executive branch and thus have strengthened the hand of executive-branch regulators, and Moreno explains how regulator power and reach have been enhanced. Both works are examples of positive analysis motivated by normative concerns.

Moreno begins with an interpretation of the Founders’ constitution, moves to a discussion of the limited state, then focuses on the vastly disruptive effects of the Civil War that by way of Reconstruction partly established the nation’s first extensive bureaucracy. He then moves to a discussion and analysis of four major regulatory waves—the Progressive Era, the New Deal, the Great Society and rise of new social regulation, and, finally, the deregulation and re-regulation that arose in the period 1975–2010. The book concludes with far less than optimistic thoughts on how the regulatory state might be escaped.

Along the way, the reader encounters literary gems that cause one to pause, maybe even to jot down notes, and certainly to read a second time. To illustrate, I offer a sample from Tocqueville’s discussion of a form of “administrative despotism” that can be produced by a modern democracy. Taken to extreme,

[t]he sovereign power extends its arms over the entire society; it covers the surface of society with a network of small, complicated, minute and uniform rules, which the most original minds and the most vigorous souls cannot break through . . . ; it does not break wills, but it softens them, bends them and directs them; it rarely forces action, but it constantly opposes your acting; it does not destroy, it prevents birth; it does not tyrannize, it hinders, it represses, it enervates, it extinguishes, it stupefies, and finally it reduces each nation to being nothing more than a flock of timid and industrious animals, of which government is the shepherd. (qtd. on pp. 31–32)

Gasp! One wonders what Tocqueville would make of the eighty thousand pages of the annual Federal Register.

As one who has spent the better part of a career teaching regulation, doing research in the area, and being employed in government regulation, I was surprised to learn that the federal government’s first major foray into regulation was not associated with the Office of the Comptroller of Currency in 1863 or with the formation of the Interstate Commerce Commission in 1887, but with the creation of the Steamship Inspection Service in the Treasury Department in 1852. But it is in Moreno’s retelling of the Commerce Commission story that I have found another gem to add to my bootlegger/Baptist collection. The story involves advice given by Grover Cleveland’s attorney general, Richard Olney, to a railroad executive. According to Olney, the commission “could be of great use to the railroads [the bootleggers]. It satisfies the popular clamor for a government supervision of railroads [the Baptist element] at the same time that that supervision is almost entirely nominal.” “The part of wisdom,” Olney continued, “is not to destroy the commission, but to utilize it” (qtd. on p. 49).

I suppose it is understandable that I would most appreciate Moreno’s treatment of the fourth wave of regulation from 1975 to 2010, the wave that encompassed most of my professional career. This chapter reminds us that the post-Watergate period began with congressional reshuffling of powers away from the executive branch. Attempts to obtain legislative veto power and formation of the Congressional Budget Office are two examples of this reshuffling. Stagflation and losses of consumer well-being then fed an executive-branch effort to show how anticompetitive forces of regulation contributed to the nation’s ills. Regulatory reform became the cause du jour during the Ford, Carter, and Reagan administrations. As a result, two of the older economic regulators—the Interstate Commerce Commission and the Civil Aeronautics Board—went out of business. Other economic regulatory activities from banking to natural gas to telecommunications were sharply revised. For a rare time in modern history, liberal politicians joined with their more market-oriented political cousins in supporting regulatory reductions in the name of enhanced consumer well-being. But while economic regulation was fading fast, social regulation that covered actions focused on the environment and safety and health was exploding.

Recognition that the economic cost of the new social regulations could be immense led presidents from Nixon to Ford, Reagan, Bush, Clinton, and finally Trump to institutionalize regulatory review. Many regulatory scholars will take issue with Moreno’s assessment of the Reagan administration’s hard-hitting regulatory-reform efforts. When considering the relative merits of different administration’s initiatives, some point positively to how President Reagan issued stronger executive orders that required benefit–cost analysis of proposed executive-branch regulations and strengthened theOffice of Information and Regulatory Affairs, making it the regulatory czar to oversee and manage the regulatory process. Moreno is of a different mind. He sees Reagan’s executive-branch circling of the wagons as implicitly fortifying executive-branch regulation as opposed to dismantling it. Moreno puts it this way: “The Reagan campaign confronted the administrative state principally on the ground of efficiency, not on more fundamental constitutional or libertarian grounds. Ironically, Reagan’s efforts to control the administrative state strengthened it” (p. 133). With admirable insight, Moreno points out that although required White House regulatory review did make issuing new rules more difficult, it did not affect agency efforts “to impose standards by informal means—the threat of lawsuits especially” (p. 133). Even now, as President Donald Trump’s Office of Information and Regulatory Affairs implements his order to remove two existing regulations for each one added and, where possible, to block finalization of pending rules he finds offensive, the focus is on the regulators, not on Congress, where all regulation is born.

Is there an escape hatch, a way to refresh the constitutional republic and constrain the expanding regulatory state? In his final chapter, Moreno discusses several avenues that might lead to meaningful reform, but he ultimately leaves the reader without a global positioning system that may guide him or her to a classical liberal’s paradise. Instead, he closes by calling on Federalist No. 1 and reminding us that “the American people were the first people in history to be able to establish a government ‘from reflection and choice,’ and not to ‘depend for their political constitution on accident and force.’ The people need to reflect and choose—to think and vote—and I hope that this history will help them to do so” (p. 152).

I recommend the book.