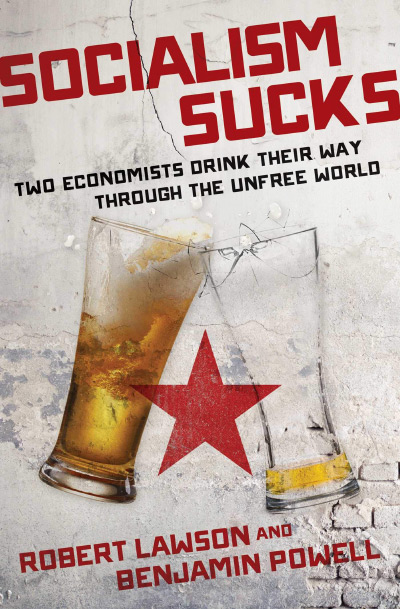 Socialism Sucks
Two Economists Drink Their Way through the Unfree World
Robert Lawson and Benjamin Powell
Kindle Hardcover Audiobook Audio CD
This book review is a web exclusive for the Fall 2019 issue of The Independent Review.

Socialism has a disastrous track record. It stinks—figuratively and literally. Yet a growing number of Americans, especially younger ones, find it appealing. “How can so many Americans view socialism so favorably, when in practice it has led to misery and mass murder?” (p. 9). The answer, as Robert Lawson and Benjamin Powell demonstrate, must be that they are ignorant about the subject. If you know someone like this, this first-hand, globe-trotting account of life under socialism may help puncture their delusions.

The authors’ first stop was Sweden. Life is pretty good in the Nordic “socialist” countries, but as Lawson and Powell explain, Sweden and its neighbors simply aren’t socialist. In fact, at the time this chapter was written, Sweden ranked 27th among 157 countries in the Economic Freedom of the World index (of which Lawson is a co-author)—although it has slipped a bit since then. Sweden is firmly capitalist, as the main industries are privately owned and run. “If Sweden isn’t socialist, then what is? This is where Americans seem to be confused.... Socialism ... really equals ... the abolition of private property; in a socialist economy, the government decides what will be produced, how and for whom” (p. 13). I can sense many readers wondering why something so obvious would need to be explained, but that’s the point—today’s students don’t seem to understand this basic fact. Accordingly, Lawson and Powell examine what’s going on in actual socialist countries—Venezuela, North Korea, and Cuba.

Just a few years ago, Venezuela was extolled by many self-professed socialists as a veritable paradise. But now, it is so dangerous that Lawson and Powell could only tiptoe across Venezuela’s border with Colombia, where they met people crushed by a collapsing system—where production of corn, rice, and coffee has fallen by 60 percent over the past decade and oil output has plunged. The clear culprit is massive nationalization and rules that force private businesses to sell at a loss, imploding into bankruptcy. In Venezuela (which ranks dead last in the latest economic freedom ranking) they encountered “starving socialism”—citing a survey finding that the average Venezuelan has recently lost over twenty pounds, while infant mortality has soared. They also encountered the effects of Venezuela’s notorious hyperinflation, as they exchanged a $20 bill for a twelve-inch stack of hundred-bolivar notes and learned that the locals no longer even count the bills for large transactions—they just weigh them.

Like Venezuela, they weren’t able to actually visit North Korea. Instead, they viewed it from Dandong on the Chinese side of the Yalu River. “Lights glimmered and neon signs flashed from the high-rises that loomed along the Chinese side of the river. But when we gazed into North Korea, there was nothing, nada, zilch. There was only pure darkness ... Supposedly Sinuiju, a North Korean city populated by more than 350,000 people ... lay in that darkness on the other side” (p. 59). “The next morning, when we opened the curtains of our room on the twenty-first floor of our hotel, we were surprised by Sinuiju. Invisible the night before, daylight revealed dozens upon dozens of mid-rise commercial, industrial, and residential buildings just across the river” (p. 61). North Korea is aptly described as “dark capitalism.” It is so poor that residents cannot afford nighttime lighting. During a daylight river cruise, they were able to peer closer and see peasants farming with draft animals and rudimentary hand tools. Staring across the border is like looking into a totalitarian abyss.

In the case of Cuba, Lawson and Powell were actually able to see socialism up close for a week. Their first stop was the completely revolting, state-run Hotel Triton. Three out of four elevators were out of order and the other one took forever; the hallway was dark; the door to their room barely opened; the bathroom had mold everywhere; running water was intermittent, and “empty beer cans floated in the cloudy water” of the pool; but the view of the ocean was nice as long as you ignored the litter-strewn beach and the half-submerged abandoned oil tank (p. 36). Not surprisingly, they soon switched hotels and found nicer accommodations in the small, newly-tolerated private sector. They ably and concisely explain the dysfunctions of “subsistence socialism” in Cuba by noting that the state sector earns no profit by pleasing customers, while the private sector does. The state-run hotel stinks because “no one cares”—no one has an incentive to care.

I read one scathing online review of Hotel Triton whose bright spot was that “Our cleaning lady was very helpful and a lovely lady.” Of course, she had an incentive to care—as she could have been rewarded by a nice tip. Reviews on TripAdvisor almost exactly match the authors’ description—“disgusting,” “scary,” “dreadful,” “nightmare,” “don’t even consider.” One review recommended: “You'd better stay in a tent on the beach” rather than staying at the hotel. However, it’s not just the state-run businesses that fail to deliver. Lawson and Powell discovered that Cuba’s culinary scene is “gastronomically challenged” and beset by “sameness,” because the privately-run firms “all face the same difficulty getting ingredients from the country’s state-controlled food industry” (p. 47). The six-page menu at a restaurant they later visited in Miami’s Little Havana “contained more options that we had seen from all the restaurants in Cuba combined” (p. 57).

The authors’ international travels are rounded out by visits to formerly socialist countries: China (“fake socialism”), Russia, Ukraine, and Georgia. The highlights of these chapters are lengthy historical asides, including an interview of a Chinese scholar who lived through Mao’s “Great Leap Forward,” whose family was forced to eat bark, leaves and grass. “I knew all the grass that was edible” (p. 75). Famine is a common attribute of socialism, and the chapter on Russia includes a clear discussion of the dynamics of famine induced by attempts to confiscate cattle, pigs, sheep and goats from their owners in 1930. Such “asides”—which include intelligent discussions of the ideas of Adam Smith, Karl Marx, Friedrich Hayek and others—are one of the book’s real strengths.

The journey ends “Back in the USSA,” as Lawson and Powell “infiltrated the largest annual gathering of American socialists” (p. 119). There they discovered what they already knew—American “socialists” have mislabeled their product. The rank-and-file don’t actually desire true socialism, they are merely modern progressives who have much in common with libertarians—except the part about wanting a larger state. The authors agree with these “socialists” that the “United States has plenty of problems.” However, “agreeing that something is a problem doesn’t mean that socialism is the solution. In fact, we think most of the problems identified by socialists, especially poverty and inequality, are a result of too much government—not too little” (p. 136). The American socialists they encounter spontaneously break into a chant of “Free abortion on demand. We can do it. Yes, we can” (p. 121), and Lawson and Powell’s conversations with attendees suggest that “abortion and environmental activism seem to be common gateway drugs to socialism” (p. 131).
The major argument of the book is that actual socialism has only a little in common with what grassroots American “socialists” profess. The authors warn that “[s]ocialist leaders see that they have an opportunity with young people if they identify socialism with an ideology that is pro-abortion and pro-environment... But if they convince young people that ‘social justice’ equals socialism, that true pro-choice, pro-immigrant, pro-environment activists should be socialist and repudiate private property and embrace collectivization or state ownership of the means of production, it’s likely that a good many of them will” (p. 139). This is a real worry, but most of the self-described “socialists” I’ve met seem deeply enamored with private property, although they also love the lure of “free” stuff (such as health care or higher education).

There are three big issues in deciding whether or not to read this book—or recommend it to others. First, what is to be gained if you already know about the dubious accomplishments of socialism? You won’t gain any new important insights, but will have a novel set of anecdotes to share. Second, what is to be gained if you have a misbegotten view of socialism? You’ll gain immensely, but being approached by someone with a book titled “Socialism Sucks” is likely to provoke the reaction of a sinner approached by a Bible thumper. Third, there’s the book’s subtitle: “Two Economists Drink Their Way through the Unfree World.” The subtitle and all that goes with it might undo some of the Bible-thumper—perhaps like handing out a tract on the Inferno subtitled “You’ll Have a Helluva Good Time There!” Ultimately, this ploy might work. However, my sense is that the authors—who describe the book as “a truthful accounting of our travels,” which “includes our sometimes excessive drinking, low-grade misogyny, and salty language” (p. 8)—have overdone it. The booze starts to drown the reader. At times one wonders if they need clinical help: “I was hobbling with a cane because I had semi-drunkenly broken my big toe” (p. 72). The occasional “low-grade misogyny”—with admissions such as “We’ve been to our fair share of strip clubs around the world” (p. 60)—will certainly turn off a chunk of their audience.

What really stinks is that we seem to live in a society where it pays to fight one kind of excess with another.