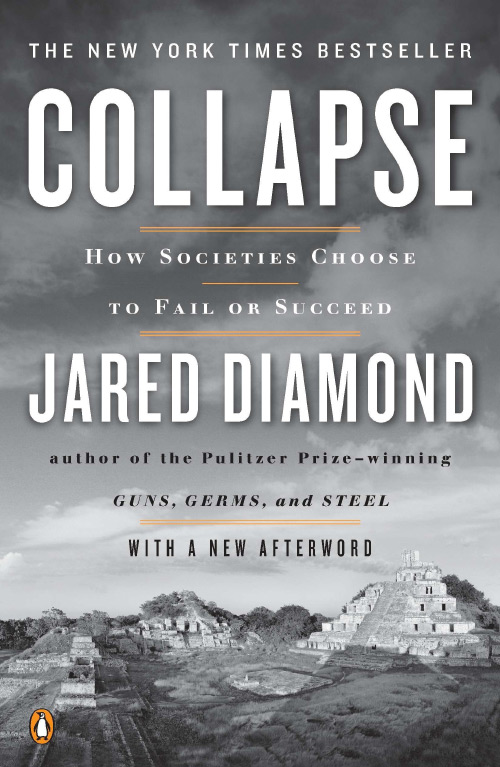 A fascinating book lies within the nearly six hundred pages of Jared Diamond’s Collapse: How Societies Choose to Fail or Succeed. The interior book is an effort to marshal the facts surrounding the disappearances of past civilizations known for the most part by the tantalizing relics they left behind. Unlike the ancient civilizations of Greece or Rome, most of Diamond’s lost cultures were small and isolated, but their names are familiar to most of us: the Anasazi who lived in Chaco Canyon in what is now New Mexico; the residents of Easter Island in the Pacific, who left giant, broken, humanlike statues; and the Vikings, who settled Greenland when the climate was warmer but died out when it grew colder. Many of us have wondered for years about these cultures. Jared Diamond—biologist, anthropologist, and author of the stunning book Guns, Germs, and Steel—should be the perfect guide to them.

Wrapped around this engrossing story, however, is an attempt to do much more than weave together what is known about these civilizations and their demise. Diamond thinks he can explain why these civilizations vanished, even though in most cases we simply do not know enough about them to come to any conclusion. What is worse, Diamond chooses to apply his fragilely spun explanations to warding off environmental collapse in the future. Thus, the book moves from mystery to unreality.

Diamond admits that when he started his research, “I naively thought that the book would just be about environmental damage” (p. 11). By the end of his studies, he has discovered five explanatory variables—environmental damage, yes, but also climate change, hostile neighbors, weakened trade partners, and society’s response.

Certainly, environmental damage was a big factor in all the collapses Diamond describes, and much of that damage was inflicted by the groups themselves. For example, the Anasazi of Chaco Canyon deforested their surroundings, although they needed the pinon nuts for food and the wood for firewood and construction. They also built irrigation ditches, but the dry climate turned the ditches into deep gulches where the water flowed too far down to be used for agriculture. Even so, the Anasazi lasted at Chaco for more than five hundred years. No one knows why they allowed their environment to deteriorate to the point where they were reduced to starvation.

Similarly, why did the Easter Islanders, through extraordinary feats of construction, build hundreds of giant statues (heads and torsos), some as tall as seventy feet? And then what happened? By the time Dutch explorer Jacob Roggeveen came upon the island in 1722, nearly all these figures were toppled, and many broken. The island’s inhabitants were few in number, impoverished, and surrounded by a deforested environment—a far cry from the kind of civilization that could have built the statues. Again, too little is known about the society to determine what happened, although rummaging through the available evidence makes great reading.

The society whose collapse is most fully understood (but still enigmatic) is that of the Norsemen who lived in Greenland during the Middle Ages. We have more information about them because we have written records and because they were not totally isolated or culturally dissimilar from kinsmen in Europe. As causes of their disappearance, Diamond cites environmental damage (caused inadvertently by efforts to create pastureland), climate change (the settlement flourished during the era known as the “Medieval Warm Period,” but then the weather got colder), and isolation from other Europeans.

Could the Norsemen have saved themselves? Yes, Diamond says, if they had been willing to adopt the lifestyle of the Inuit Eskimos, who gradually took over Greenland. The Inuit were skilled whalers who lived on whale meat. Diamond asserts that the Norsemen were too “Eurocentric” to change their patterns of living, and therefore they died.

Exploring the possibilities is fascinating, and Diamond’s efforts to piece together answers through his five variables keep us turning pages. Still, most of the collapses remain unsolved, in large part because we do not know enough about these societies’ institutions. For example, we do not know whether some of the forests were a vast commons and, if so, why no property-rights institutions developed.

Diamond offers a few clues, but he does not seem eager to examine institutions. Although he refers to the tragedy of the commons, he does not explore it as an explanation for most of the collapses. He also recognizes that differences in interests between the elite and the masses may help to explain some of the failures, but to him human factors pale beside the environmental ones. The book’s subtitle, How Societies Choose to Fail or Succeed, also reveals that Diamond does not focus much on individuals, even though individuals, not societies, actually make decisions.

Diamond’s big misconception, however, is not his neglect of institutions, but rather the idea that his speculative conclusions can be applied to modern-day problems. “The parallels between Easter Island and the whole modern world are chillingly obvious,” he writes. “[I]f mere thousands of Easter Islanders with just stone tools and their own muscle power sufficed to destroy their environment and thereby destroyed their society, how can billions of people with metal tools and machine power now fail to do worse?” (p. 119). Diamond is saying that because we have much more physical power than the Pacific islanders had, we—apparently—will use it destructively. But why can’t we use our physical power to improve our environment and our society, especially in a world in which we have extensive knowledge, technology, and global trade? Diamond does not question his own logic.

Especially puzzling is Diamond’s choice of the state of Montana as his “model of the world” (his phrase). Diamond is personally familiar with Montana, especially the Bitterroot Valley near Missoula, because his family spends summers there. Montana illustrates “almost all of the dozen types of problems that have undermined pre-industrial societies in the past, or that now threaten societies elsewhere in the world as well,” including “problems of toxic wastes, forests, soils, water (and sometimes air), climate change, biodiversity losses, and introduced pests” (p. 35).

Montana certainly has some environmental problems, but they are hardly preludes to devastation. Indeed, Diamond admits that it “may initially have seemed absurd” to feature Montana, and he assures readers that Montana is not in “imminent danger of collapse” (p. 74). He insists, however, that it is worth considering because if it has problems, then other places with larger populations and more fragile environments are surely in greater danger. He tops off his justification by saying that the signs of danger are already there: Montana cannot support itself and must rely on the rest of the United States. “If Montana were an isolated island ... its present First World economy would already have collapsed, nor could it have developed that economy in the first place” (p. 74).

Of course, Montana is not an isolated island. Indeed, virtually every place in the world today is in touch with the rest of the world through trade, telecommunication, and personal travel. So one is left wondering exactly what the book’s purpose is. Did Diamond get caught up in the doomsday atmosphere of today’s environmental movement and feel that his stories had to have a higher purpose? It’s a mystery.