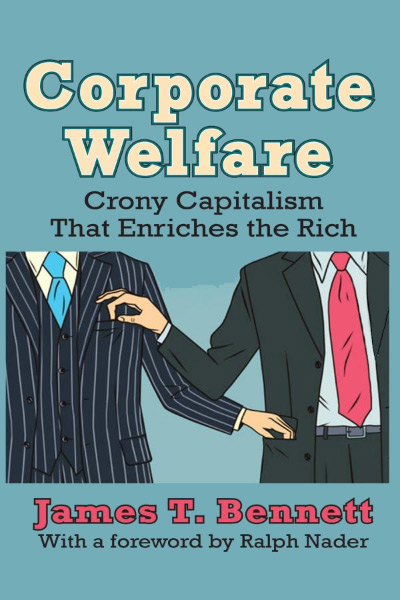 Corporate Welfare
Crony Capitalism That Enriches the Rich
By James T. Bennett
Kindle Hardcover
This book review appeared in the Summer 2016 issue of The Independent Review.

James T. Bennett’s new book Corporate Welfare: Crony Capitalism That Enriches the Rich examines American corporatism from the early days of the republic to recent battles surrounding the renewal of the Export-Import Bank of the United States. Long have special interests sought to manipulate government for financial gain in the United States, and Bennett chronicles these exploits with wit and humor. Though it may seem that the current swarm of lobbyists and crony capitalists is a relatively new plague, it is not. The cronies have always crawled across Capitol Hill, the political swamps that surround it, and the hinterlands.

Bennett begins by examining the emergence of the mercantilist philosophy embodied by Alexander Hamilton and his acolytes in the early years of the United States. Pretty much from the get-go, powerful private economic interests have jockeyed for access to the public purse. Hamilton’s Report on the Subject of Manufactures outlined to Congress the case for state-sponsored “help” to business. Business left to its own devices would not produce the maximum good for the new nation, he argued. The federal government must guide the beast commerce. Ah, what a familiar refrain.

And so Bennett begins the sordid tale of American corporate welfare and crony capitalism. From Hamilton and the early anti-Jeffersonians to the Whigs, the Republicans, the “robber barons,” right through the Progressive Era, and into the modernera after Hoover, at every stage of American development cronies have exploited the taxpayer and regulatory apparatus for private gain.

Bennett focuses primarily on four areas of cronyism, all from the past century: the Supersonic Transport (SST) battles of the 1960s and 1970s; the doling out of incentives paid by taxpayers to manufacturing firms primarily in the American South in the mid–twentieth century; the use of eminent domain by corporations in Detroit and Toledo; and last, the “poster boy” of crony capitalism, the Export-Import Bank of the United States. All four cases are well documented, and as the instances of corporate welfare are deconstructed, one is struck by the audacity of the players. I write about crony capitalism every day, and even I found instance after instance of abuse in Corporate Welfare that gave me pause.

The jewel of the book, which is excellent the entire way through, is the story of the death of Poletown in Detroit. Imagine an entire neighborhood laid waste because General Motors (GM) decided that it wanted to plop a factory down on that part of town. That people lived there, that Poletown was perhaps the most integrated neighborhood in Detroit if not Michigan, meant little to the company or the cronies in city and state government. An entire community was soonwipedcleanfromthefaceofthe earthfor thebenefit of onelarge andvery connected company.

At one point, Bennett paints for us the real picture of elderly Polish women praying in protest in the church they have attended since leaving the old country while the city machine bangs on the doors. The parishioners held off the wrecking ball for a couple weeks only to be arrested and hauled away by police officers, who were basically GM’s hired goons. Frankly, that’s the nicest word to describe them that comes to mind. Even in the United States, a place of refuge for these people, the powers that be could run roughshod right over the everyday folks. In a kind of corporate blitzkrieg, Poletown was destroyed. The powerless met the wheel, again.

Bennett examines the important role the anticorporate Left played in the resistance to GM in Poletown. Ralph Nader led much of the fight to save the neighborhood, and it is refreshing to hear of the “good old days” when pro-market/anticrony forces on the right (such as they were) had friends on the left. There are too few anticorporatists on the left these days. Nader, who penned the introduction to Corporate Welfare remains one, and we can be thankful for that.

One of the main points Bennett emphasizes throughout the book is that to really put a wrench in the crony gears, libertarian and conservative anticrony types would be wise to cultivate genuine relationships with those on the left who sincerely oppose corporate welfare. It was such a coalition that ultimately killed the SST boondoggle, for instance.

The tale of the death of the SST—a project supported by three presidents, most of the Senate, industry, and the Washington bureaucracy—is encouraging. The project was defeated with a coalition of environmentalists, “good liberals” (of the twentieth-century sort), and fiscal conservatives. Bennett explains that even though the entire Washington apparatus was in favor of the SST, the anticrony coalition held together and over a decade and a half wore the apparatus down until ultimately the project was killed. It was a victory for the environment, a blow against the “war machine,” and a win for taxpayers. It was a significant loss for the cronies.

The last example of corporate welfare explored is the Export-Import Bank of the United States, “Boeing’s Bank.” As I write, Congress has forced a vote on the revival of Ex-Im, whose charter expired in June 2015, via a “discharge petition.” This means that the legislation bypasses committee, where it would have been sure to die. We are within a hair of another big win for anticrony activists—by far the biggest potential (anticorporate welfare) win since the SST. But the bank may survive ultimately because libertarians and conservatives haven’t done a good enough job of enlisting the anticrony Left. The only way the Ex-Im renewal gets out of the House is with backing from some Democrats who know better. If it gets out of the House, Ex-Im’s charter is sure to be renewed.

Bennett explains in detail why the Export-Import Bank should have died long ago and why it hasn’t. From its earliest days as a vehicle to exploit Stalin’s industrialization plans right on up until today, the bank has been a conduit through which unfair and fundamentally antimarket projects have flowed for the benefit of large corporations. From dams in South America to recent billion-dollar deals with state-owned oil companies, Ex-Im has shown itself to be bad for the environment and for the people and companies that must compete with the firms lodged under Ex-Im’s taxpayer-underwritten wing. The vestige of the New Deal lives on (maybe) because corporations including Boeing, GE, Caterpillar, and others see Ex-Im as almost a corporate “right.” This sort of entitlement should annoy anticorporate “crusaders” in Congress, but for the most part it hasn’t. The pro-market guys have had to fight Boeing and the U.S. Chamber of Commerce alone. This tack has proven precarious, and Bennett would likely argue that it could have been less precarious with better coalition building.

Indeed, Bennett explains that an anticorporate welfare lobby composed of “taxpayers, small businesspeople, environmentalists, populists—of everyone from the TEA Party to the Green Party—would strike fear into corporate hearts” (p. 209). And, boy, would it ever.

Corporate Welfare offers an excellent overview of one of the great and emerging political issues of our time. Just days ago Governor Jeb Bush felt the need to address crony capitalism and corporate welfare in an op-ed in the Washington Examiner. Other candidates for president have also felt the need to weigh in on our crony economy. Change is clearly in the air, and anticorporate welfare agents of change (both the professional and lay variety) would do well to learn the history and lessons contained in Bennett’s latest work.

Nicholaus D. Sorrentino
AgainstCronyCapitalism.org
Business and EntrepreneurshipEconomic History and DevelopmentEconomic PolicyEconomyEntitlements and Welfare
Subscribe Buy This Issue Get the App