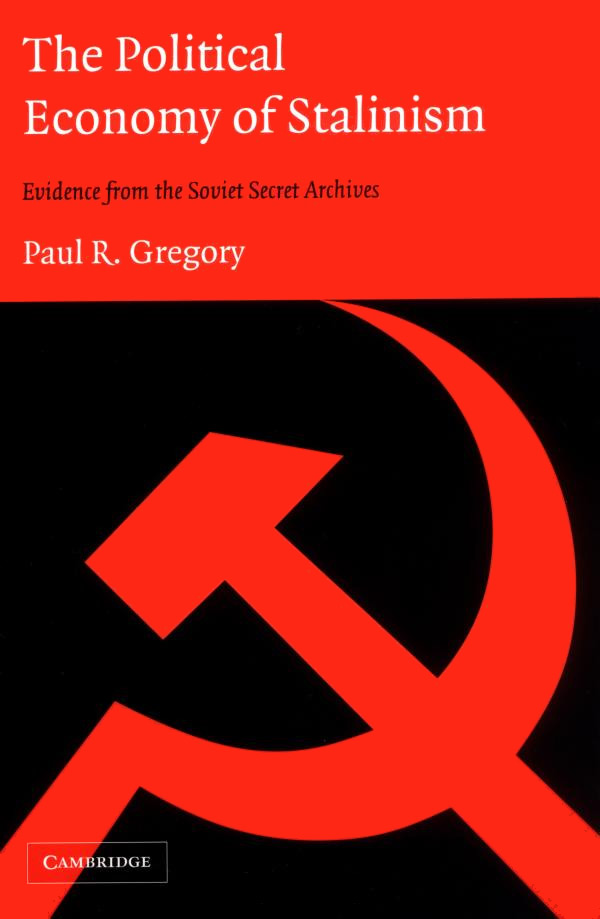 The Political Economy of Stalinism
Paul Gregory
Kindle Hardcover Paperback
This book review appeared in the Spring 2006 issue of The Independent Review.

Paul Gregory has long been a leading figure in the field of comparative economic systems and in the analysis of the Soviet system in particular. His textbooks Comparative Economic Systems (7th ed., Boston: Houghton Mifflin, 1998) and Russian and Soviet Economic Performance and Structure (7th ed., Reading, Mass.: Addison-Wesley, 2000), have been standard texts for close to two decades. In his original research on the Russian and Soviet economies, Gregory, more than his contemporaries in economics (save R. W. Davies), has also exploited the opening up of the Soviet archives after the collapse of communism. He utilizes the archives so effectively in part because he has developed a theoretical framework that employs the insights from property-rights economics, the new institutional economics, and modern political economy in his efforts to make sense of the mountain of data he has unearthed. His books Before Command: An Economic History of Russia from Emancipation to the First Five-Year Plan (Princeton, N.J.: Princeton University Press, 1994), Restructuring the Soviet Bureaucracy (New York: Cambridge University Press, 1990), The Economics of Forced Labor: The Soviet Gulag (coeditor, Stanford, Calif: Hoover Institution Press, 2003), and now The Political Economy of Stalinism are required reading for anyone who hopes to learn why the system evolved as it did and how it generated a certain structure of incentives but failed to solve critical coordination problems.

Gregory stresses that the dichotomy between political leadership and the institutional structure of the command economy is a false one. Political leaders were selected within the context of the Soviet command economy, and that structure demanded dictatorship. Soviet misfortune in terms of both political abuse and economic deprivation was a consequence not of bad leadership, but of the institutional structures associated with command and control. In making his argument, Gregory draws on the work of Ludwig von Mises and F. A. Hayek concerning the problems of economic calculation that a centrally planned economy confronts and the political logic of central control that provides a mechanism for the worst to get on top. Stalin’s rise, in other words, was not an accident, but rather an inevitable consequence of the Bolshevik Revolution. If not Stalin, then whoever else rose to the top would have had to rule in a Stalin-like fashion. Such is the fate of pursuing the socialist program of the abolition of commodity production. Stalinism is the logical though unintended and undesirable consequence of the impossible dream of socialism as it clashes with the refractory reality of modern economic life.

Stalin’s behavior is best understood within the framework of dictatorship and the incentives that dictators face. Building on Mancur Olson’s “stationary versus roving bandit” model and Ronald Wintrobe’s political economy of dictatorship, Gregory examines what type of dictator Stalin was and how his behavior shifted during his reign to respond rationally to the incentives he faced and the tasks he assumed. These decisions, Gregory shows, were not economically rational, but instead met other objections that were more aligned with political objectives of the moment, including the pursuit of ideological dreams and the exercise of pure power over political opponents.

In the bulk of his work, Gregory focuses on getting inside the economic planning apparatus between 1928 and 1953. He mines the archives to explore the relationship between central planners and industrial ministries, and he explains the conflicts, the signals of loyalty, and the opportunism exhibited throughout the Soviet economic-planning apparatus. Principal-agent problems as well as those of rent-seeking behavior are illustrated in the detailed case study of Soviet economic management. In the process, Gregory dispels the myth of rational and comprehensive central economic planning in the Soviet system. Paul Craig Roberts, in Alienation and the Soviet Economy (New York: Holmes and Meier for The Independent Institute, 1990), supplied perhaps the clearest treatment of the nonplanned nature of Soviet economic planning prior to Gregory’s treatment. Gregory does not fully accept Roberts’s thesis about the polycentric Soviet economy, but he does not dismiss it out of hand, and the evidence he unearths in the archives certainly lends additional credence to the polycentric thesis, augmenting the evidence Roberts had at his disposal in the 1960s when he was formulating his position.

The glue that held the Soviet system together was the threat of coercion and the unashamed exercise of that coercion throughout the political and economic structure. Gregory demonstrates how the collapse of the system was associated with the breakdown of both the legitimacy of and the ability to exercise the coercive threat to impose discipline on laborers and managers. In short, the opportunism always intrinsic in the Soviet polycentric system outstripped the signals of loyalty and the pretense of discipline. The system came unglued in the late Brezhnev period and even further in subsequent years under Gorbachev, and by the end it was scarcely hanging together at all.

The Political Economy of Stalinism represents a major step forward in the political and economic analysis of the Soviet system. Gregory has worked tirelessly with Russian and Western scholars to use the new information available in the archives to explore alternative hypotheses about the Soviet system’s history, practice, and collapse. Scholars on the left have argued that the Soviet system’s failures were a consequence of the misfortune of certain leaders: if only Trotsky had defeated Stalin, or if only Nikolai Bukharin had been in charge, then socialist democracy and rational planning would have been realized. On the right, writers have focused on the roles that Pope John Paul II and Ronald Reagan played in loosening the socialist stranglehold in the Soviet Union and throughout the East Bloc. Academics in the middle have often entertained the hypothesis that the social collapse sprang from a technology gap that finally reached crisis dimensions in the 1980s. Whatever merits these alternative hypotheses might have, they must yield to the more fundamental hypotheses that rational economic planning is impossible under a system of collective ownership of the means of production and that the organizational structure of the administrative command system has its own logic and consequences that are detrimental to justice and individual freedom. Rather than describing a workable system that might have operated efficiently if only the workers and managers had tried harder and stayed on task, the archives reveal individuals striving to cope and to better themselves within an inherently unworkable system. Rent-seeking political actors, shirking workers, opportunistic managers—such was the reality of Homo sovieticus. Gregory deserves credit as the first economic historian of the Soviet system with both the analytical tools and the access to the archives required to expose this reality and to present it clearly to readers in economics, history, and political science.