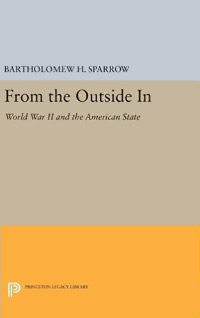 From the Outside In
World War II and the American State
Bartholomew H. Sparrow
Kindle Hardcover Paperback Mass Market Paperback
This book review appeared in the Summer 1997 issue of The Independent Review.

The major theme of From the Outside In is that “states make war; wars make states” (p. 3). The book describes how World War II affected the growth of the federal government in four different areas: social security, public finance, labor management relations, and naval procurement. The external (“outside”) threat forced the federal government to develop its resources. Thus, the American leviathan was built “from the outside in.” The author concludes, however, that the growth was uneven and in some cases might have been greater had the war not intervened. In general, Sparrow’s work lends support to Robert Higgs’s “crisis” theory of government growth, but it raises additional questions about the nature of wartime politics.

Why does government grow? Scholars have attributed the growth to rising affluence, the pressure of interest groups, the empire-building of bureaucrats, and the extension of the vote to previously disenfranchised classes. Robert Higgs, in Crisis and Leviathan: Critical Episodes in the Growth of American Government (New York: Oxford University Press, 1987), made a convincing case for the importance of crisis in explaining the timing of government growth in the United States. During a depression or war, the public demands government action. Programs created to deal with the emergency survive after the crisis has passed. In the postcrisis phase, government is reduced but remains larger and more powerful than it would have been in the absence of the emergency (the “ratchet effect”).

Sparrow accepts the crisis theory of government growth but adds a “resource dependence” perspective drawn from the organizational theory of Jeffrey Pfeffer and Gerald Salancik (The External Control of Organizations: A Resource Dependence Perspective. New York: Harper & Row, 1978). Although we can expect government to grow during a crisis, the growth will vary depending on the resources that government can extract from the private sector. Resource dependence theory emphasizes the external constraints on government: the state must secure its resources (tax revenues, goods, and services) from the private sector through either cooperation or coercion. Democratic governments are further constrained by their need to please voters. During World War II, American voters wanted “the war conducted as quickly and painlessly as possible, without labor unrest, without untoward inflation, and with the fewest possible casualties” (p. 20). Consequently, the government could not rely solely upon coercion; it had to seek the cooperation of those who controlled the resources needed to conduct the war. Resource dependence theory is the social scientist’s way of stating that the government must deal with the “outside” world, even during a crisis.

From the resource dependence model, Sparrow derives several sets of hypotheses about how government is expected to grow during a crisis. Many of these hypotheses express the obvious: for instance, the president will direct “state-building” where he has the constitutional power to do so (e.g., military procurement, debt financing), while Congress will maintain control of state-building in its constitutionally appointed areas (e.g., taxation). The frequent references throughout the text to “Hypothesis 1a” or “Hypothesis 3c” are confusing and distract from Sparrow’s main point, which is that the war had “uneven effects” on government growth (p. 258).

Social Security exemplifies government growth forestalled by a wartime crisis. World War II marked the “missing years” of Social Security; the most significant expansions of the system occurred before and after the war. In the late 1930s, an increase in Social Security benefits received growing bipartisan support. During the war, however, Congress refused to raise benefit levels (except for veterans), though it did dramatically increase the number of beneficiaries and “contributors” (i.e., taxpayers).

The war years witnessed the maturation of the labor movement. Labor leaders cooperated with the Roosevelt administration by pledging not to strike. Cooperation yielded an increase in union membership and a general decrease in labor militancy. In the late 1940s President Truman lost his wartime authority over labor management relations. Nevertheless, by 1950 a clear “ratchet effect” had occurred: the federal government was much more actively involved in mediating disputes than it had been before the war.

World War II also brought about a revolution in government finances. The revenue demands of the war led to a dramatic increase in income tax rates, the introduction of withholding, and the mass marketing of government securities. The monumental success of this revenue raising marked the triumph of “commercial Keynesianism.” Policymakers now believed they could manipulate the economy to ensure full employment. The newly created financial mechanisms remained after the war, and the government used them to finance its growing domestic and international commitments.

In a case study of naval procurement, Sparrow challenges the conventional wisdom that large corporations reaped huge profits from their military contracts. Although many procurement officers were corporate executives who subsequently returned to private industry, Sparrow rejects the view that they made up a “power elite” beholden to big business. Marxist historography notwithstanding, the federal government was not a “class-based American state” serving the interests of greedy capitalists (p. 248); “money did not rule, and corruption did not run rampant” (p. 285). On the contrary, the military kept corporate profits low. (The poor performance of the stock market undoubtedly reflected this poor profit picture.) The congressional gnashing of teeth over “excessive war profits” was much ado about nothing. Similarly, congressional concern that the small manufacturer was being squeezed to death was unfounded. Small manufacturers actually achieved much greater profit increases than their larger counterparts (a point I make in my own study of business during the war, Beyond the Broker State: Federal Policies Toward Small Business, 1936–1961. Chapel Hill: University of North Carolina Press, 1996).

Sparrow also questions the notion that the war created a “military-industrial complex.” He rejects Gabriel Kolko’s argument in The Roots of American Foreign Policy: An Analysis of Power and Purpose (Boston: Beacon Press, 1969) that the military-industrial establishment constituted a “ruling class” able to defend its interests before Congress. According to Sparrow’s account, the military-industrial complex “collapsed” as a result of the rapid demobilization at the end of the war (p. 163). There is some truth to Sparrow’s argument. Radical critics of the “military-industrial complex” overstate the political influence of defense contractors. Indeed, defense spending is the one area of government that has endured deep cuts in recent years. The marginal benefits of defense spending are not readily apparent to voters; consequently, the military presents an easy target during budgetcutting sessions. (Witness the current treatment of the military by a “conservative” Congress.) Nevertheless, the fact remains that a bureaucratic structure resembling a “military-industrial complex” remained in place. The war strengthened the ties between industry and the military. Military spending was higher than before the war, and the government was committed to research and development of new weaponry. The low profits of military contractors signified only that the government had the upper hand in its relations with defense contractors. This shouldn’t be surprising: business executives have long regarded the federal government as “the worst customer in the world.” Despite these criticisms, Sparrow has a point: The military-industrial complex did not achieve a much higher share of federal spending until the outbreak of the Korean War.

Sparrow offers several valid and useful modifications of Higgs’s crisis theory. Higgs emphasizes the government’s attempts at cost concealment (e.g., disguising inflation through wage-price controls). Sparrow notes that the government was not very successful at concealing the costs of the war. (Of course, one can wonder how any government could hide that it was suddenly consuming half the output of the economy.) The high tax rates were obvious, and the extension of the income tax to middleclass Americans meant that Everyman felt the pain of taxation for the first time. No wonder so many people complained about high taxes and obnoxious government controls on consumer goods. The one hopeful lesson of the war is that taxpayers have their limits. By broadening the tax base, the federal government created a pool of disaffected voters.

Sparrow stresses that the war involved more than an amplification of existing demands for governmental action—it also transformed the political agendas of various interest groups. Most important, the war absorbed several of the social movements of the 1930s. The militancy of the “old-age” activists and labor leaders gave way to negotiation within the confines of the post-New Deal broker state.

From the Outside In is an important addition to the literature on government growth, but its social science jargon and narrative detail will challenge all but the most persistent reader. Nevertheless, it points in the right direction: We need more administrative histories of agencies responding to crisis. Only then will we have a complete understanding of the causes and consequences of government growth in the twentieth century.