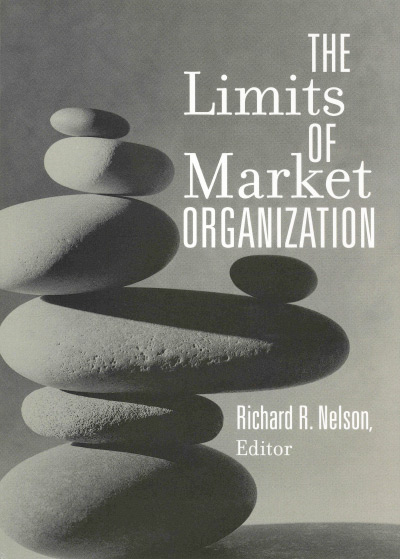 The Limits of Market Organization
Edited by Richard R. Nelson
Hardcover
This book review appeared in the Summer 2006 issue of The Independent Review.

The quickest tip I can give the potential reader of Richard R. Nelson’s collection The Limits of Market Organization is that it is difficult to read. Each of the thirteen chapters deals with a particular area, ranging from financial clearing systems to health care to campaign finance, in which unbridled laissez-faire would be undesirable. The normative argument is supplemented by an often-detailed history of government regulation in the area under study, so that some one hundred pages of the book are devoted to a chronology of legislation and to numerous statistics relevant to the discussion in the various chapters. Needless to say, The Limits of Market Organization works better as a reference work for the academic rather than as a quick read for the intellectual layperson.

Besides the monotony of the content, the book has a more frustrating feature—namely, the antiseptic euphemisms used for policy recommendations. Just as one who reads large excerpts from the Pentagon Papers might find himself being sucked into the worldview of the war planners, so too does the reader of this book find himself numbed by the very language used by Nelson’s contributors. Needless to say, no one ever explicitly suggests that men with guns take certain amounts of money away from citizens and spend that money. Rather, we are treated to pleas for “public responsibility” and “government investment.” After reading chapter after chapter of such claims, they sound more and more reasonable and indeed moderate. One cannot really grasp this phenomenon without reading several chapters, but the following quotation is a good example of what I have in mind:

Both private and public governance have played important roles in the development of the [Internet]. . . . Public funding remains important for information technology R&D and the support of large university ­infrastructure that trains engineers and computer scientists. . . . The U.S. telecommunications infrastructure that underpins the Internet has moved toward a deregulated, competitive structure, but public and private regulation of the organizations that govern Internet standardization and technical infrastructure management has expanded. Indeed, the very growth of the Internet and related opportunities for investment and profit from its commercial applications are influencing demands for greater public involvement in its oversight. (p. 286)

At this point, I must confess a worry: of course a reader like me, who classifies all government actions as criminal invasions of property rights, would be dissatisfied with Nelson’s book. Is it possible that my extreme views are prejudicing my evaluation?

Naturally, one can never know such a thing for certain, but in this case I don’t think it to be so. In a number of cases, Nelson and the other contributors either offer a non sequitur or simply contradict themselves in presenting their ideas. For example, in his introductory essay, Nelson offers this clarification: “[I]t is a mistake to see the governance issue as strictly about the balance between markets and government. Child care, an activity that absorbs an enormous amount of resources, is largely provided by family members, with market institutions and government both playing a subsidiary role. Not-for-profit organizations principally govern organized religion and Little League baseball” (p. 4). From this paragraph, libertarian readers may feel ashamed of their knee-jerk hostility to a book entitled The Limits of Market Organization. Why, it’s not a protosocialist tract after all! Who but the most extreme Objectivist would advocate the commercialization of religious services or the rating of charitable organizations on the basis of their dividends to shareholders?

And yet, reading the substantive chapters of the book, one finds that such a suspicion of the book’s socialist agenda is well founded. Although Nelson’s introduction couches the analysis as an investigation of the limits of market organization, we find that it is really an exploration of the limits of nonstate organization. I did not encounter a single reference to letting the voluntary (yet extramarket) sector exclusively handle any of the issues covered in the book. Indeed, let us take Nelson’s own example of child care. In the chapter covering this important issue, we learn:

Child care and child rearing may still be viewed as primarily the responsibility of families, but the conventional wisdom that emerged in the mid-nineteenth century regarding mothers’ exclusive responsibility . . . has largely disappeared. . . . Just as the public schools expanded in large part in the nineteenth century by assuming tasks that the family no longer could accomplish (the socialization and control of youth). . . , an early childhood education and care system may now be assuming the roles of education, care, and socialization of three- and four-year-olds in response to new knowledge about how children learn. . . . Questions still remain, however: where should the care and education be provided, who should pay for it, and what should be done about the one- and two-year-olds? (p. 185)

Needless to say, the answers the authors provide to these “questions” are certainly not that the care and education should be provided by the children’s grandparents or neighbors or that they should be paid for through bake sales.

And the invalid arguments to which I alluded? The book is full of them. One frequently sees a claim of the following form. Because of public outcry, the government regulated an industry in the past. Then, because of free-market ideology and obvious inefficiencies, the industry was deregulated, though not completely (because that option would be irresponsible and reckless). The partial deregulation led to unforeseen problems, as detailed meticulously herein. Therefore, the attempt at privatization in this industry was clearly a failure. In discussing the “privatization” of the electricity industry, for example, Kira Fabrizio explains: “Price and entry regulations are removed in the generation sector, natural monopoly services are ‘unbundled’ from the generation portion, and regulators establish mandated access to the network facilities with prices set by new regulatory mechanisms” (p. 34).

Another typical mistake occurs when an author outlines valid concerns, but fails to see that the solution is to roll back government involvement, not to increase it. We have already seen that in fact the problems with so-called “deregulation” of the electricity industry stem from the perverse incentives of what in reality was re-regulation. In a different case, Elliott D. Sclar complains that passenger rail service has not truly failed the “market test” because of the subsidies that airline and automobile travel receive from the government. As you can guess by now, Sclar’s solution is not to cut the subsidies to these modes of transport, but rather to level the playing field by increasing subsidies to Amtrak and other suppliers (pp. 82–84).

Finally, consider many contributors’ inconsistencies. They write as though it is sufficient simply to point out a possible problem with market organization, and yet they do not realize that their proposed government solution would suffer even more from this same problem. For example, in the chapter on early childhood education, the authors motivate their endorsement of public provision by the following: “In principle, government can influence the quality of care provided by the private sector through the standards it sets for that care with regulations. However, regulations are not very effective if they are not monitored” (p. 204). Has it not occurred to them that government employees may sometimes fail to accomplish their assigned missions and that indeed it is often necessary for their superiors to monitor them to ensure that they do what they are supposed to do?

For a different example of this fallacy, consider the alleged “two reasons” that the market cannot be entrusted with passenger rail service: “First, private investors are not able to absorb the hugely expensive long-term risks in creating products for markets that do not yet exist. Second, private investors are reluctant to enter markets in which the likelihood of an unsubsidized positive market return is small in the best of circumstances” (p. 84). Admittedly, the second reason does not fit the pattern I am discussing, but I have included it for humor’s sake: the author is castigating the private investor for not investing in projects that, in all likelihood, will lose money. Yes, that is indeed a feature of the market economy, but it is a good thing. Resources are scarce, and they should not be invested in certain projects if consumers prefer that they be invested elsewhere.

As to the first reason offered in the quotation, notice that it naively assumes that the government derives its revenue from somewhere other than the private sector. It is simply absurd to declare that project X requires government funding because the private sector “can’t afford it.” Moreover, is it really the case that government officials are more farsighted than private investors? A simple comparison of a large mutual fund and the Social Security Administration should answer that question. Do not misunderstand: politicians are certainly happy to spend billions of dollars on all sorts of projects, but that eagerness should not be interpreted as bold risk taking.

In conclusion, Richard R. Nelson’s The Limits of Market Organization provides at best a fairly comprehensive history of U.S. regulation for various industries. To the extent that Nelson intended his book to change anyone’s mind on the proper limits of government activity, he has failed, at least in this reader’s case.