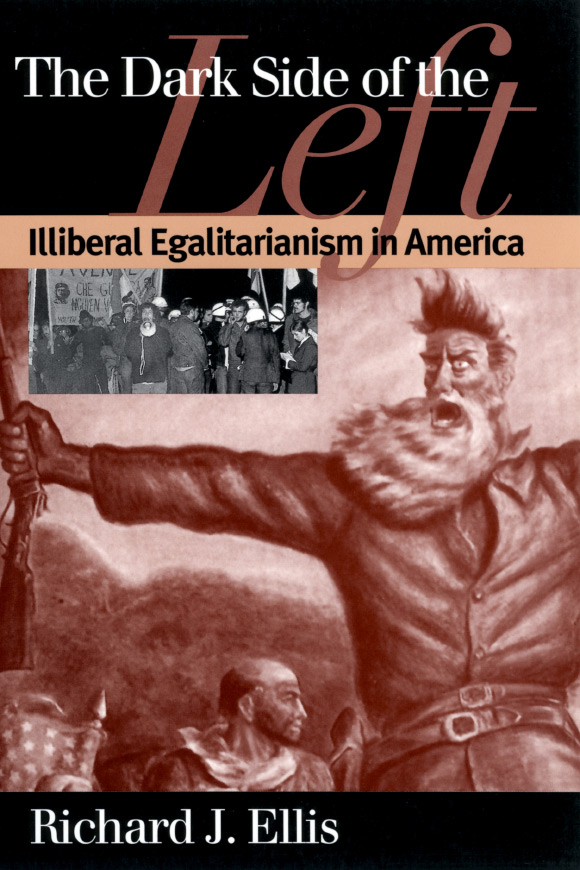 The Dark Side of the Left
Illiberal Egalitarianism in America
Richard J. Ellis
Hardcover Paperback
This book review appeared in the Winter 1999/00 issue of The Independent Review.

Professor Richard J. Ellis has a problem. A modern liberal, he seemingly longs for the good old days when no right-thinking person ever crossed a picket line or doubted the right of strikers to maim those who wished to work; that happy time when elections were, as they should be, auctions on goods about to be stolen (as the phrase goes). In short, he misses the plain old social democracy of the various Deals and Frontiers, which now seem (to some of us) more tiresome than new. He is distressed that so much energy on the Left now goes into divisive identity politics, multiculturalism, radical feminism, and the rest. Even so, Ellis has written quite a good book (despite his debts to Richard Hofstadter, Isaiah Berlin, and Judith Shklar) and may not, I admit, really want to see strikebreakers maimed on a regular basis.

Distancing himself from right-wingers who criticize the Left, Ellis opines that big government “make[s] this country a better place” (p. ix). He expects authoritarianism to come from the Right—what with all those Carlists and Iron Guardists out there in Iowa, I suppose—and recommends, in his endnotes, the “social scientific” nonsense of Theodor Adorno. Against the inborn evil on the Right, he champions the “liberalism of fear”—a phrase that makes some of us reach, at least, for our water pistols—along with the welfare state, which muddles through in a kindly, bumbling fashion. He finds authoritarianism “paradoxical” and “inadvertent” on the Left, with its “noble ideal” of equality, although one would have thought it implicit in the Left’s principles and well evidenced by twentieth-century history. Despite these unpromising beginnings, it is well worth seeing what he has come up with.

Taking a long view, Ellis begins with the Radical Abolitionists, who opposed all oppression, hierarchy, and coercion and leaned toward utopian communities. Coercion of the South by Father Abraham’s terrible swift sword was another matter, however, in a war of national “atonement.” Their support of the “inveterate liar” John Brown (as Ellis calls him) foreshadowed their enthusiasm for Beast Butler’s crimes in occupied Louisiana and for “annihilating” the white South. For most abolitionists, principled nonviolence quickly gave way to righteous violence in a war against sin and hypocrisy. They were a moral elite.

Ellis next turns to the “illiberal” utopianism of Edward Bellamy. This late-nineteenth-century reformer’s system rested on a Rousseauist notion of the General Will, egalitarianism, and a search for social “authenticity” (to be determined by another self-named elite?). Human nature was basically good, but had been twisted by evil institutions that must, therefore, be totally smashed. Ellis finds the same themes running through the populist novels of Ignatius Donnelly. As for actual utopian communities set up in that period, some held together for a while under strong personal dictatorship but later collapsed.

Ellis notes that thinkers of this type “both love and loathe” the people (p. 74). Walt Whitman is a case in point. His “rebellious call for perpetual agitation and questioning sits uneasily with his search for ultimate synthesis and unity” (p. 76). Actually, he reminds me of Mao Zedong, but Walt does not seem to have killed even his first million. Whitman found comfort in the cleansing democratic militarism of the War of 1861–65. (War certainly gives us big supra-individual goals, and the connection between leftism and militarism has been remarked, though our author makes little of it.) Ellis follows the thread of literary leftism through Waldo Frank, Randolph Bourne, and Mike Gold. He has kind words for Bourne, who went from admiring German efficiency and collectivism to critically damning Woodrow’s War. But Ellis finds in these worthies evidence of a strong “disdain for the lives of ordinary people,” a disdain that unites the Old and New Lefts.

Ellis’s chapters on the rise and fall of Students for a Democratic Society constitute the best part of the book. He rejects the “generational theory” according to which younger New Left militants swarmed into SDS and radically shifted its direction. “Purism,” the wish to build “counter-institutions,” contempt for liberals (I admit to smiling at this one), and a deep-running fear of co-optation by the Establishment played their part. (Ellis sees Tom Hayden as paradigmatic here.) Marcuse and Fanon became beloved theorists, with their liberating message that progressive violence is much nicer than reactionary violence, and is always justified. (There were new calls to remake the South, but outright “annihilation” went unmentioned.) Ellis denies that psychology can account for SDS’s “illiberal turn” (why—when it works so well to explain the “radical” Right?). SDS’s run from social democracy to Weathermania calls for ideological analysis. Here Ellis is very much on track.

Having learned from C. Wright Mills that the “labor metaphysic” was outworn (since the workers everywhere had failed to overthrow the bourgeoisie), the New Left—and SDS—became trapped in a new “poverty metaphysic.” The Oppressed—Blacks and poor—were all wonderful by definition. But SDS’s attempts to organize the poor led to bitter disappointment: “when New Left radicals met ordinary Americans, most of the radicals didn’t seem to like what they found” (p. 161). In the end, only Vietnamese and Cuban revolutionaries were at all worthy: the alienation of SDS from American life was complete. Radical egalitarianism worked in those societies, although, once again, in that troubling atmosphere of war and militarism. Another hallmark of SDS was anti-organizationalism, which was supposed to help in avoiding Old Left sectarianism and elitism. In practice, the absence of clear lines of authority led to the irresponsible rule of charismatic leaders. (Poor Tom Hayden is mentioned again.) Factionalism and collapse flowed from these ideological wellsprings.

Ellis next weighs radical feminism. He notes that radical feminists’ dogmas of “false consciousness” (from which everyone suffers but them) and the “social construction” of reality allow them to view their pronouncements as immune to criticism. It becomes possible to plan the total remodeling of society without reference to any reality experienced by ordinary—nonradical nonfeminist—members of society. This is dreary Marxoid stuff, and we owe Ellis a debt for slogging through it. Professor Ellis rounds out his study with two chapters on radical—I would have said “insane”—environmental groups such as Earth First!. I first wondered what they were doing in this book, but he makes the case that people who believe in the equality of all beings, who hold a nonempirical view of Native Americans as noble savages, and who write endlessly about the evils of consumer goods and industrial society are indeed radical egalitarians. His comparison of William Ophuls and Jean-Jacques Rousseau is right on the mark. In Ophul’s ideal world, an ecologically sensitive elite will order the rest of us about, keeping us alive—just barely—in hearteningly ascetic, egalitarian poverty.

Now, you might think a fellow who has cottoned on to these, er, drawbacks of egalitarianism might swear off the stuff. But apparently there is, somewhere, just the right amount of state-enforced equality. “Social scientists” and latter-day New Dealers are running the numbers right now. The liberal state (“of fear”?) will balance, rebalance, and calibrate basic values on some unknown schedule and rotate our tires as well. Privacy will be “cherished” and policies “scrutinized.” Thrusting aside the “atomized individualism” of the mean old market, Ellis exhorts us to move “toward a liberal egalitarianism” and shun the libertarian dogma that “each step taken in the direction of equality must lead inevitably to the final extinction of liberty.” (Anyway, to proclaim liberty our most important value would be “authoritarian”!) But if there are, say, a thousand steps to “the final extinction of liberty” and Congress is presently debating the seven-hundredth, might we not rightly worry more than we did when they were debating the twelfth? If the erosion of liberty is cumulative, as Hayek suggested, must we yield each time the bloody shirt of “equality” is waved—especially when “equality” seems to have no logical stopping point whatsoever?

Professor Ellis has written an informative and intelligent book about extreme egalitarianism, but he reminds me of Arthur Schlesinger, Jr., who, having worked his whole life for a bloated, Caesaristic presidency, suddenly noticed the “imperial” dimensions of the office just when Richard Nixon occupied the throne. There is some kind of asymmetry at work here, and I suspect that the “dark side of the Left” is much bigger than any bright side we can find. And as far as basic values go, it probably helps to start from the Anglo-American trinity of Life, Liberty, and Property rather than from the French one (“Liberty, something, and something”—I forget).