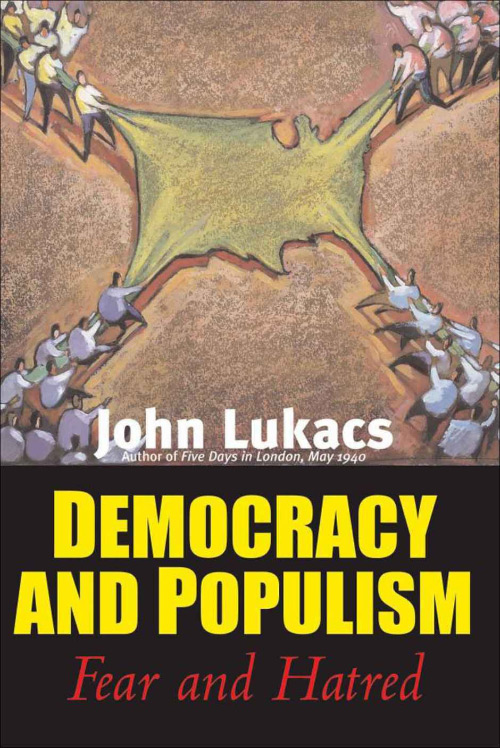 I don’t know if historian John Lukacs watches television. If he does, one hopes that he wasn’t watching the June 8, 2005, broadcast of CNN’s Lou Dobbs Tonight. Interviewing Time columnist Joe Klein, Dobbs asked, “What’s wrong with ‘populist’? It’s all about the people, isn’t it?” In Democracy and Populism: Fear and Hatred, Lukacs answers that question with a resounding “No!”

Dobbs’s belief in “the people” is not uncommon. In fact, it is increasingly the identifying feature of America’s political right. In today’s red state–blue state landscape, conservatives have effectively branded themselves as the party of the common man—embattled dissidents fighting the entrenched, elitist, and hegemonic left. Despite controlling the federal government and vast swaths of the media, conservatives have mastered the message of the underdog. Just as Franklin Delano Roosevelt used the Great Depression and World War II to solidify his power, conservatives have expanded their reach under the banner of eradicating terrorists—to protect “the homeland” and “the people.” Thus, except for a few who still retain some Tory sensibilities, conservatives tend to agree with Dobbs’s sentiment.

Fortunately, Lukacs is not such a conservative. A native of Hungary, he emigrated to the United States in 1946 and soon afterward accepted a position teaching history at Chestnut Hill College in Pennsylvania, a position he held until his retirement in 1994. During his almost fifty-nine years as a historian, Lukacs has written more than twenty-four books and attracted a small band of conservative followers. Because his conservatism has a more elitist and European flavor, however, few people today openly admit to being his disciples.

Democracy and Populism was written primarily as a broadside against the modern “conservative” movement. “The ‘Right,’ for a long time, was not populist. But now it often is—which is perhaps the main argument of this book” (p. 18). For Lukacs, populism is not simply a benign devotion to “the people.” Populists are ultimately nationalists, and in nationalism Lukacs finds the root of many of the twentieth century’s most terrifying events.

Lukacs begins, as many others have, with Tocqueville. As the young French aristocrat wandered the American countryside, “[Tocqueville] believed in the few benefits of remaining nondemocratic institutions, restraining total and untrammeled democracy” (p. 10). Much as Tocqueville did, Lukacs now surveys the American political scene and sees total democratization. “Democracy,” he writes, “has become unlimited, untrammeled, universal” (p. 11).

The democratic impulse, which for so long was the driving force of the left, is now equally identifiable with the conservative movement. One example is the right’s complete acceptance of George W. Bush’s doctrine of democratic revolution. One wonders how conservatives would greet the French Revolution if it were to occur today. Would they still agree with the conclusions Edmund Burke reached? Can they conclude as James Madison did in the Federalist Papers that democracies “have ever been spectacles of turbulence and contention; have ever been found incompatible with personal security or the rights of property; and have in general been as short in their lives as they have been violent in their deaths”?

Unfortunately, they cannot. Although one might be tempted to equate modern conservatism with an infatuation with democracy, Lukacs argues that the matter is not so simple. Certainly the right is comfortable speaking the language of democracy. More insidiously, however, it is not just “the people” that animates the right, but “the nation.”

Conservatives now believe they have sole possession of patriotism. They support the government, wear American flag lapel pins, and “buy American.” Lukacs sees their patriotism in a different light. “Patriotism is defensive; nationalism is aggressive. Patriotism is the love of a particular land, with its particular traditions; nationalism is the love of something less tangible, of the myth of a ‘people,’ justifying many things, a political and ideological substitute for religion. Patriotism is old fashioned (and, at times and in some places, aristocratic); nationalism is modern and populist” (p. 36). Who can deny that today’s conservatives do indeed speak of America in an obscure and mythic fashion? Although nationalism and patriotism may overlap, they differ distinctly. Lukacs argues that a patriot can be aristocratic and cosmopolitan, but a nationalist can be neither.

American conservatives, through their nationalism and populism, have come to accept vast increases in government intervention. Conservatives, writes Lukacs, “who oppose governmental regulations, bureaucracy, further and further applications and extensions of the American welfare state, are, more than often, believers in and vocal supporters of ‘defense’ expenditures, of the army and navy and air and space programs, of more police powers, etc.—as if these were not ‘government’” (p. 161). Although much of this support for the most violent elements of government can be traced to nationalist tendencies, antileftism plays a significant role as well. In many cases, determining the “conservative” position is as simple as determining what the left prefers to avoid.

In his discussion of the issues identified in the book’s subtitle, Lukacs finds the same transformation of left and right. Fear infects the former, whereas hatred dominates that latter. As Lukacs reminds us, however, this difference did not always exist. Traditional conservatives, including Burke, feared the French Revolution, untrammeled democracy, and loss of their privileged status and property rights. Conversely, the left hated the aristocratic order of wealth and political power. When Lenin and the Bolsheviks seized power, they brought their hatred down upon those who represented the ancien rÈgime.

Today, we still see hatred, but it is a nationalistic and populist hatred of outsiders, foreigners, and those who seem “insufficiently or even treasonably nonnationalist” (p. 204). Consider the scorn heaped upon leftists whom conservatives see as “un-American” for their criticisms of the Bush administration. Ann Coulter pens best-sellers that routinely accuse the left of “treason,” and talk-show host Michael Savage entitled his latest book Liberalism Is a Mental Disorder. French fries have been renamed “freedom fries,” and television personality Bill O’Reilly routinely instructs his viewers to boycott French wine. Such sentiments clash with those expressed by such iconic traditional conservatives as Russell Kirk and Richard Weaver. For its part, the left finds itself in constant fear of a global corporate plot to dominate and despoil the planet and of the rise of “fascism” under the Bush administration.

Unfortunately, although Democracy and Populism contains such insights, it is marred by errors, inconsistencies, and an often distracting writing style. Among other things, Lukacs has an inclination toward extreme hyperbole. Although America’s obsession with celebrity may be regrettable, it is not “satanic” or “reminiscent of the Anti-Christ.” Nor was Hannah Arendt “dishonest.” One might make a long list of such overdrawn accusations and declarations.

In his excoriation of the American conservative movement, Lukacs attempts to fit too much under the nationalistic rubric. He asserts that “anti-Communism has been widespread and popular not because it was conservative but because it was nationalist.” Nationalism played a role in the anticommunist movement, to be sure, but Lukacs’s assertion that it was the primary motivation is sweeping, unsubstantiated, and careless. The American anticommunists of the 1950s, 1960s, and 1970s were for the most part believers in free trade and cosmopolitanism—traits incompatible with nationalism. The American anticommunist movement was animated in substantial part by Catholicism and hatred of the communist ideal.

Perhaps most troubling are Lukacs’s ever-changing and obscure definitions. In covering such a wide swath of intellectual territory and in doing so in the form of a meditative essay, Lukacs may be partially forgiven for these inconsistencies. Unfortunately, although readers may come away from the book with a visceral feeling about populism, they will be hard pressed to define exactly what Lukacs has in mind by it. The same complaint applies to his discussion of nationalism. Given the centrality of these two concepts in the book, their fuzziness causes Lukacs’s argument to lose much of its punch.