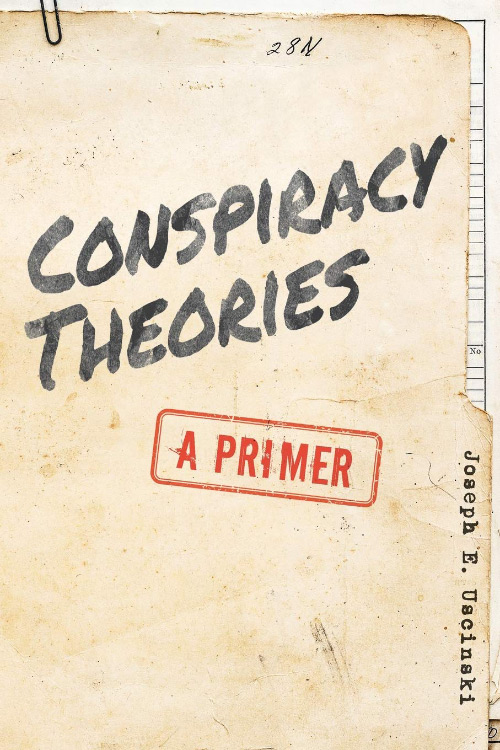 Conspiracy Theories
A Primer
Joseph E. Uscinski
Kindle Hardcover Paperback
This book review is a web exclusive for the Fall 2020 issue of The Independent Review.

One of the great scenes in cinematic history is from Stanley Kubrick’s masterpiece, Dr. Strangelove. In the scene, Major T. J. Kong rides a nuclear bomb to fiery oblivion, sealing his fate and that of the entire world. While the film is a masterful skewering of many of the figures and the logic behind the Cold War, it also contains an indirect warning about the dangers of conspiracy theories in the wrong hands. After all, the entire impetus for Major Kong’s ill-fated last ride was the action of Brigadier General Jack D. Ripper, who believed that a secret communist plot to sap Americans of their “precious bodily fluids” through water fluoridation required nuclear retaliation. Though it is not the primary plot element of the film, we laugh at the absurdity of Ripper’s commitment to such an outlandish conspiracy theory. Surely very few of us would subscribe to something so unbelievable.

However, most of us will be shocked to learn that our differences with Ripper are more of degree than of kind. This surprising fact, among many others, is contained in Joseph E. Uscinski’s enjoyable and enlightening volume Conspiracy Theories: A Primer. Uscinski, a political scientist at the University of Miami, has made the study of conspiracy theories one of his chief scholarly pursuits. In the book, he provides a thorough survey of the current academic literature on conspiracy theories, as well as potential explanations for why conspiracy theories are so popular, what bearing they have for our political discourse, and what, if anything, should be done to address the existence of conspiracy theories.

Given the seeming ubiquity of conspiracy theories, a natural next step is to wonder what makes them appealing to so many individuals. Chapter 4 provides background on psychological and sociological factors that may make the adoption of such conspiracy theories easier for certain individuals. Psychologists have pointed to various cognitive and personality traits that may make the adoption of conspiracy theories more likely and have also hypothesized that different psychological conditions (in the sense of emotional states, such as stress) may have a role to play too. However, there are numerous limitations to these psychological explanations, with the literature being at times contradictory and the laboratory experiments oftentimes lacking external validity. As a result, studying sociological factors like group dynamics and intragroup competition are advanced as other potential explanations.

The final chapter of the book applies many of these insights to today’s politics. But before turning to this, Uscinski provides a cautionary tale of the danger that conspiracy theories held by governments themselves can pose. Using the Ruby Ridge standoff as illustration, Uscinski shows that government agents acting on conspiracy theories can pose a unique danger given their capacity for violence.

The topic then shifts to the 2016 presidential election. Donald Trump has found himself both a strong promoter and sometimes victim of conspiracy theories. During his campaign, Trump promoted several conspiracy theories, such as a theory that ISIS operatives were infiltrating the southern border and that Senator Ted Cruz’s father played a role in the assassination of President Kennedy. On the other hand, the political left—including mainstream outlets like MSNBC—have found themselves consumed by conspiracy theories alleging that Trump owes his electoral victory to Russian interference, or even that he is a Russian agent himself. The chapter concludes with discussions of the role that the internet and social media have potentially played in popularizing various conspiracy theories. Although social media and the internet are popular targets, Uscinski finds little evidence to support the assertion that they are to blame. Websites that promulgate conspiracy theories are simply not very popular, and those who are not already predisposed to conspiracy theorizing are incredibly unlikely to stumble upon evidence for conspiracy theories that they will find convincing. Thus, calls for the internet to be further regulated are ultimately not very compelling. Relying on governments to pressure social media companies for adjudicating what is true and false remains a risky proposition.

The final conclusions reveal some small issues with the book. Notably, when presenting suggestions for how to deal with conspiracy theories, Uscinski notes the importance of electing politicians who do not believe in conspiracy theories. But politicians are rational actors—at the end of the day, they will select the strategies that they believe will secure them victory in the next election. If conspiracy theories make up part of their strategy, the fault may lie more with voters than with those they select. And while the summary of psychological and sociological reasons for adopting conspiracy theories is useful, there do not seem to be as many pure rational choice explanations, though this is likely more a result of the literature than negligence on Uscinski’s part. At the very least, there does seem to be room for interested rational choice theorists to contribute to the discussion.