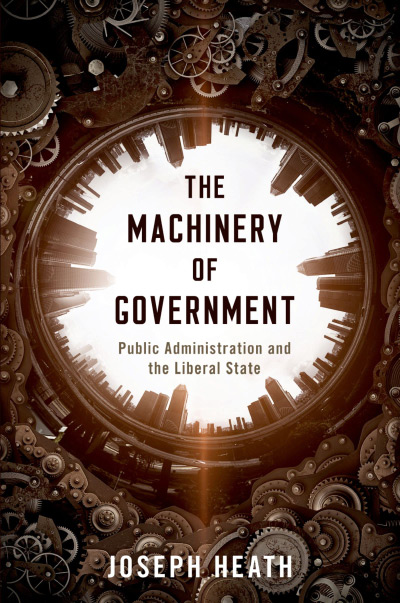 The Machinery of Government
Public Administration and the Liberal State
By Joseph Heath
eTextbook Hardcover Paperback
This book review is a web exclusive for the Spring 2022 issue of The Independent Review.

Robert Paul Wolff once remarked that “[t]he size and industrial organization ... of the modern state destroy any possibility of classical liberal democracy” (8). Over the last century, the aspirations and capacities of administrative agencies have rapidly expanded at the expense of judicial power and democratic accountability. Meanwhile, philosophers continue to ponder theories that enshrine the ideal of democratic participation within a political structure of three separate powers, each confined to its own sphere. As a result, our normative theories have become estranged from the daily decisions faced by our public servants. In The Machinery of Government, philosopher Joseph Heath accepts this characterization as a starting point and strives to develop an “ethics of the administrative branch.” This new ethics embodies a “reconstructive account” of the norms that should—and, Heath claims, typically do (ix, 40, 277)—regulate the behavior of government bureaucrats. In offering this account, he makes a host of provocative claims:

Although the book discusses many topics and defends several theses, the central argument can be succinctly summarized: the power and discretion of the administrative state are necessary for efficient governance, and, because efficiency is a politically neutral principle, this power and discretion are compatible with liberalism.

Heath’s argument rests on an empirical premise, an assumed dichotomy between expertise and democratic accountability, or checks and balances more generally. This dilemma is not as tragic as it might seem, for we can embrace expertise and reduce democratic accountability without abandoning liberal principles. The key is to identify and inculcate the implicit, liberal norms that guide “best practice” in public administration. In particular, governmental agencies should use their administrative power to promote politically neutral principles, which support an approach that relies on cost-benefit analyses, constrained by a respect for rule of law norms. When agencies adhere to this approach, the massive powers currently wielded by the administrative state are compatible with our ideal of a liberal society.

The Machinery of Government is a valuable book. Heath’s methodological approach—involving a careful examination of current practice along with a reconstruction of its implicit moral underpinning—presents a refreshing alternative to the conceptual approach taken by many applied ethicists. He avoids handing down tablets containing uninformed and impractical prescriptions; he succeeds in blending moral analysis with a deep understanding of the day-to-day requirements of governance. Taking Heath’s stated goal at face value—“[h]elping other people to express their understanding of the world” (ix)—his book should be considered a success.

As a work in normative political theory, however, Heath’s book is less convincing. In particular, it does not convincingly establish the necessity or desirability of an enlarged and empowered administrative state. One of Heath’s key premises—the alleged dichotomy between expertise and institutionalized accountability—conflicts with a large and growing literature on social epistemology and epistemic institutionalism. Yet, this literature receives no attention or engagement. Theoretical and empirical evidence now suggests that expertise functions best when it operates in a competitive environment, characterized by diversity, transparency, and contestation (see, for example, Roger Koppl, Expert Failure, Cambridge University Press, 2018; David M. Levy and Sandra J. Peart. Escape from Democracy: The Role of Experts and the Public in Economic Policy, Cambridge University Press, 2016; and William Easterly. The Tyranny of Experts: Economists, Dictators, and the Forgotten Rights of the Poor, New York: Basic Books, 2014). By contrast, Heath claims that democratic or judicial limitations on public administration will undermine the benefits of expertise. We face a choice, according to Heath, between “efficiency gains” and “the separation of powers” (287). Readers familiar with recent work on social epistemology will wonder whether Heath has oversimplified the relationship between accountability and expertise.

Heath would resist this criticism by citing his proposed system of “peer-level regulation” (278) as a source of accountability. This leads directly to a second and more obvious objection to rule by experts who “advance an independent conception of the public interest” (41), namely, that their conception of the public interest, even if well-motivated, will represent a narrow and biased range of experiences and beliefs (see, for example, David Estlund, “Why Not Epistocracy?” in Desire, Identity and Existence: Essays in Honor of T.M. Penner, Kelowna, BC: Academic Printing and Publishing, 2003, 53-69; and Elizabeth Anderson, “The Social Epistemology of Morality: Learning from the Forgotten History of the Abolition of Slavery,” in Miranda Fricker and Michael Brady, eds., The Epistemic Life of Groups: Essays in the Epistemology of Collectives, New York: Oxford University Press, 2016, 75-94). A prominent theme in social epistemology is that effective learning does not occur without feedback from a broad range of stakeholders. “We cannot hope to get our moral thinking straight” Elizabeth Anderson argues, “unless we include the affected parties in our moral inquiry, and include them on terms of equality. The social epistemology of moral inquiry is ... essentially democratic” (2016, 78).

Those who value social learning and moral progress should therefore hope that Heath is incorrect when he claims that a “professional workplace culture” of peer-to-peer regulation is our only means of effectively constraining the administrative state. Luckily, the greatest shortcoming of this book is not the weakness of the proposed solution, but the failure to consider alternative and complementary solutions that are prominent in the literature on expertise, public administration, and administrative law. For our purposes, we might consider two sorts of proposed solutions: those that seek to improve democratic decision-making and those that seek to enhance or define the role of judicial oversight.

Democratic theorists have explored many ways of reforming democratic institutions so as to make democratic choice more reliable, the intention being to mitigate the conflict between reliable decision-making and democratic accountability (see, for example, David Estlund, Democratic Authority: A Philosophical Framework, Princeton University Press (2007), and Luc Bovens and Wlodek Rabinowicz. “Democratic Answers to Complex Questions: An Epistemic Perspective.” Synthese 150, no. 1 (2006): 131-153). Heath ignores the massive literature on epistemic democracy, which is surprising given that his argument hinges crucially on the supposedly greater effectiveness of administrative bureaucracies when compared to democratic deliberation.

Perhaps Heath’s avowed methodological approach explains why he neglects proposals aimed at improving democratic reliability. The goal of his book is “reconstructive,” rather than radical (40). He wishes to avoid sweeping institutional prescriptions, instead seeking to unearth and refine the norms and principles that account for our current institutional structure and guide the practices of our administrative agents. Many proposals for democratic redesign might therefore strike him as orthogonal to his reconstructive project.

Leaving aside the philosophical question of how aspirational political philosophy should be, I would suggest that, even without radical redesign, the current system possesses the resources to constrain the administrative state without undermining the benefits of expertise. Allowing courts to scrutinize the legality of administrative actions does not require major reform or institutional redesign. It merely requires that we permit courts to play the role traditionally assigned to them in our political system. This brings us to the second sort of solution that goes unconsidered: solutions that seek to enhance the effectiveness of judicial oversight.

While Heath does consider the use of courts to check the powers of our administrative agencies, he rejects it far too quickly. Heath argues that we cannot rely upon the judicial branch, or the legislative for that matter, because they lack the expertise to understand the complex policy issues that expert administrators must deal with on a daily basis. But this argument is insufficiently nuanced. It obscures a formal institutional solution, based on the separation of powers, by lumping together questions of fact, on which administrative agents possess true expertise, with questions of law, on which courts possess more expertise than administrative agents (see Richard Epstein. The Dubious Morality of Administrative Law, New York: Manhattan Institute, 2019; and Jeffrey A. ​​Pojanowski, “Neoclassical Administrative Law,” Harvard Law Review, 133 (2019): 852). Heath’s insistence that we demand deference on the part of courts and reject de novo review of administrative decisions, is thus based on an incomplete analysis of the role that courts can play in checking administrative power. While Heath may be correct that the technicalities of health and safety render the evaluation of scientific facts beyond the capacity of judges, this does not entail that courts must refrain from making judgments in their area of expertise, viz. questions of law. Granting deference in one area does not entail deference in the other.

Consider one of Heath’s many great examples: neither legislators nor courts have the expertise to determine what constitutes a safe level of dust exposure for factory workers (265-6). In answering such questions of fact, we plausibly assume, the experts of the Occupational Safety and Health Administration (OSHA) are better equipped. However, granting OSHA deference in determining such questions of fact need not entail granting them deference in determining the purely legal questions of whether they have a right to mandate reductions in particle levels, force workers to wear protective masks, limit contractual agreements, or impose punitive fines on noncompliant employers. These questions are technical only in the legal sense, an area in which OSHA is not owed special deference on the basis of its expertise. Unqualified deference undermines the rule of law by allowing agencies to determine the legality of their own actions (Linda Jellum, “Interpreting Ambiguous Tax Statutes,” Social Philosophy and Policy, forthcoming). If we can avoid such deference without forgoing expert guidance, we therefore have good reason to do so.

Handing over the creation and enforcement of rules to unaccountable technocrats thus poses an unnecessary risk and relying on an informal culture to ensure their good behavior is to rely upon a weak guardian. Without formal support, this culture is vulnerable to forces that always threaten to undermine the benefits of expert control: the divergence of incentives, the lack of epistemic feedbacks, and the hubris that tends to develop in the groupthink incubator of hierarchical bureaucracy. A better alternative is to focus on the ecological conditions that allow us to reap many of the benefits of expertise without surrendering our capacities for self-governance.