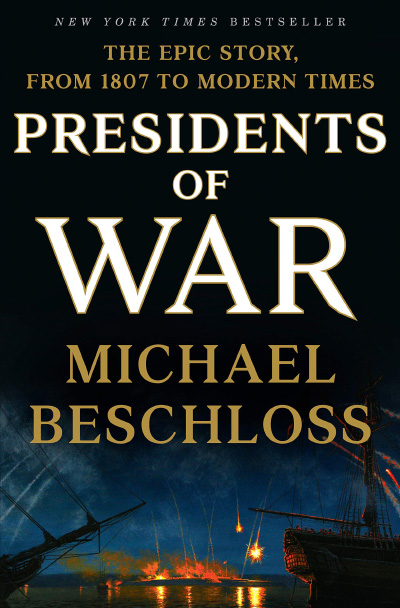 Presidents of War
The Epic Story, from 1807 to Modern Times
By Michael Beschloss
Kindle Hardcover Paperback Audiobook Audio CD
This book review appeared in the Summer 2019 issue of The Independent Review.

The American constitutional project was an attempt to deal with the fundamental paradox of government—any government strong enough to protect the rights of citizens is also strong enough to undermine those rights. War poses an especially unique challenge to constraining Leviathan since war making tends to increase the scope and scale of state power over almost all aspects of citizens’ lives. To check the state’s warmaking powers, the American Founders designed a set of checks and balances through a separation of powers. The legislative branch was empowered to declare war, and the executive branch was empowered to serve as the commander in chief once war is declared. As Michael Beschloss’s new book Presidents of War clearly demonstrates, this system has failed. As he notes in the opening pages, “[D]uring the past two centuries, Presidents, step by step, have disrupted the Founders’ design,” with the result that “the life and death of much of the human race has now come to depend on the character of a single person who happens to be the President of the United States” (p. viii).

To provide insight into this process of constitutional erosion, Beschloss examines eight presidents and the wars they oversaw. His sample includes James Madison and the War of 1812, James Polk and the Mexican-American War, Abraham Lincoln and the Civil War, William McKinley and the Spanish-American War, Woodrow Wilson and World War I, Franklin Roosevelt and World War II, Harry Truman and the Korean War, and Lyndon Johnson and the Vietnam War. These cases offer insight into three general correlates of war in societies with mature, constitutionally constrained governments.

First, war making is associated with expansions in the scope of state power and the trampling of civil liberties. Beschloss provides numerous examples of this correlate across instances of war. Lincoln suspended habeas corpus and authorized the use of military tribunals to try citizens. Wilson implemented loyalty tests and lobbied Congress for an espionage bill, resulting in the Espionage Act of 1917 and the Sedition Act of 1918, to punish disloyalty and language that demonstrated contempt for America. Roosevelt authorized the internment of Japanese Americans, secretly gave J. Edgar Hoover the power to engage in illegal wiretapping of domestic “enemies,” and ordered military tribunals for eight German prisoners, two of whom were naturalized Americans. In his constant search for domestic Communists, Johnson authorized the CIA to violate its charter by engaging in illegal surveillance of U.S. citizens and infiltrating targeted groups. As this nonexhaustive list illustrates, war making has consistently been a means for the state to ignore constitutional constraints and trample on the civil liberties of the domestic populace.

Second, war making is correlated with executive deception. Historically, this deception has taken on various forms and occurred to varying degrees. As Beschloss documents, presidents have repeatedly lied to Congress and to the American public about the pretext for war, the costs of war, and the status of ongoing wars. He traces war-related deception back to James Madison and the War of 1812, noting that “[i]f later Americans loathed a lack of candor and forthrightness in their wartime Presidents, they would be justified to point an accusing finger at Madison for setting expectations too low” (p. 93). Various forms of deception played a key role in initiating and perpetuating wars in several other cases. In at least one instance—World War I—deception was formally institutionalized through a dedicated propaganda apparatus when President Woodrow Wilson authorized the Committee on Public Information to proactively influence public opinion in support of the war effort. In general, war making has historically been correlated with half-truths, outright lies, and systematic secrecy by those in power to advance their goals.

Government deception is highly problematic for a free society, even if it is employed for supposedly noble ends. Lying by the political elite creates a culture where the citizenry is viewed as an oppositional power that stands in the way of the executive achieving his goals. Rather than serving the citizenry by seeking genuine consent, the executive conceals and manipulates information so that potential opposition by citizens is neutered. Whether this deception is well intentioned or not does not change the fact that it reverses the relationship between citizens and the state from one in which the former is viewed as the driving force in politics to the reverse.

Third, war making is correlated with the weakening of constitutional constraints. A key theme of Presidents of War is that war has led to the centralization of power in the executive branch and a disregard for legislative approval. Of the sample of eight cases of war studied by Beschloss, three presidents—Lincoln, Truman, and Johnson—did not even bother seeking congressional approval. The lack of consequences for blatantly ignoring the Constitution make clear that the constraints on executive war making are nothing more than ink on parchment.

Even those presidents who did seek congressional approval for war—Madison, Polk, McKinley, Wilson, and Roosevelt—actively contributed to undermining the effectiveness of the constraints on executive power. For example, Madison pushed and deceived an “ambivalent” Congress to declare war, which started “the long presidential encroachment on Congress’s war-making power that marked the next two centuries” (p. 92). James Polk also secured congressional approval prior to the onset of the Mexican-American War. However, “[a]s soon as Congress had declared war, Polk had started machinating to expand [the war’s] goals far beyond what the two houses had explicitly authorized” (p. 122). Moreover, “neither Congress nor the American people were informed about the portentous expansion of the war’s mission” (p. 123). As this example illustrates, the separation of powers presents significant slack for discretionary decision making by the executive, and presidents have historically been all too willing to take advantage of the slack to achieve their goals.

Although Presidents of War does an excellent job of documenting these correlates of war, it does have some faults. For example, Beschloss simultaneously notes that Abraham Lincoln “seized unprecedented power to address the national emergency [the CivilWar]” (p. 198) and that “he did so within the democratic process” (p. 236). It is far from clear that many of Lincoln’s acts—for example, the blockade of Confederate ports, the suspension of habeas corpus, the use of military tribunals, and so on—were within the confines of the democratic process as envisioned by the Founders.

Beschloss further justifies Lincoln’s behavior by noting that “he made clear that his expansion of presidential authority was intended merely for the duration of the conflict and should not be taken as a precedent either by himself in peacetime or by later Presidents” (p. 236). This attempted justification fails given that one of Beschloss’s key insights is that wartime presidents’ actions create institutional precedents that future presidents could use and have used. These precedents are established even if the president in power viewed the original action as necessary, noble, and short term. Lincoln may have thought he was taking the right steps to end the war, and Beschloss might agree, but that does not excuse Lincoln as a significant contributor to the step-bystep process through which the U.S. Constitution has been eroded through war making.

Beschloss praises Franklin Roosevelt’s war effort as the catalyst of the post- Depression economic recovery. “It was Roosevelt’s rearmament program,” he writes, “that managed to stimulate the economy and put the jobless to work” (p. 433). But as Robert Higgs has documented, the idea of wartime prosperity is a myth, and Roosevelt’s policies created regime uncertainty that retarded economic recovery until after the war ended (Depression, War, and Cold War: Challenging the Myths of Conflict and Prosperity [Oxford: Oxford University Press, 2006]).

Finally, the book is written from the perspective of the eight presidents who engaged in war. This president-centric perspective adds value by focusing on the various dynamics that influenced presidential decision making as it pertains to war. At the same time, however, it necessarily downplays various effects of war on other key domestic and foreign actors. The domestic effects of war are discussed, but the full extent of the costs imposed on ordinary citizens is downplayed relative to other topics, such as the physical and mental health of the American presidents during their time in office.

Foreigners receive even less focus, as Beschloss’s approach pays little attention to the costs imposed on those outside America’s borders. Although Beschloss demonstrates that constitutional constraints are flimsy domestically, it is important to keep in mind that constitutional constraints are largely absent when the U.S. government intervenes abroad. The result is that the U.S. government has often imposed significant costs—both in blood and in treasure—on foreigners. Presidents of War presents insight into the domestic consequences of war making in terms of expansions of state power and the erosion of the U.S. Constitution, but its domestic, president-centric focus understates the global costs of U.S. wars.

Nonetheless, Beschloss poses an important challenge to the constitutional project by documenting how the state’s core protective functions have historically been major contributors to the weakening of constitutional constraints and the expansion of state power in ways that threaten the domestic freedoms of the American populace. This is not a recent phenomenon but instead is the result of an ongoing process of constitutional erosion that began in the early 1800s and shows no signs of reversing anytime soon.