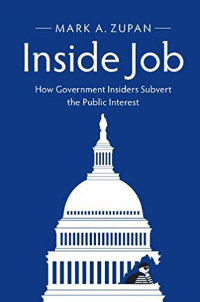 Inside Job
How Government Insiders Subvert the Public Interest
By Mark A. Zupan
Kindle Hardcover Paperback
This book review appeared in the Spring 2018 issue of The Independent Review.

Mark Zupan does a masterful job advancing his thesis that government insiders subvert the public interest. By applying his disciplinary expertise in industrial organization (IO) economics, Zupan finds both common ground with public-choice theory as well as one important distinction. He applies the label “quasi-market” to the study of governance in order to discuss the incentives of political actors as managers. Public-choice scholars, by contrast, view their analytical lens as behavioral symmetry, which requires viewing political actors in the same way as market participants. Although not rejecting this framework, Zupan uses IO as a lens for evaluating government accountability. The result is a book that I recommend as a useful complement for readers of The Independent Review.

The book is a well-organized treatment of political economy. It spends two chapters developing the idea that insiders leverage increasing centralization to dominate government. Importantly, this leveraging occurs both in autocracies and in democracies as a difference in degree of domination. The book proposes microfoundations for insiders. The demand side is the familiar culprit, interest groups, who lobby for their economic interests through government. The other group is the insiders, public employees and political agents who operate by supplying ideology. The book is large in scope and balances the U.S. perspective with a global experience with government. The contemporary examples include North Korea, Russia, Iran, Venezuela, India, Argentina, and Greece. Zupan draws on a broad set of historical examples in his discussion as well. Footnotes to thinkers such as James Buchanan and F. A. Hayek are useful in drawing connections to public choice. Zupan also draws clear inspiration from Milton Friedman in developing his central thesis.

In chapter 1, Zupan develops a supply-and-demand model of politics. He also introduces a few examples of the “insider,” in one case giving New York’s Robert Moses as an exemplar of this type of agent. Moses used ideology to create popular reform, but he also left a personal legacy through his idiosyncratic preferences for public spending. Zupan’s narrative works with institutionally thick descriptions of the term insider, and so a precise definition of this term remains elusive in that other writers have defined it as the “political entrepreneur.”

In chapter 2, we see how breakdowns in accountability and transparency of government create opportunities for insiders to highjack the state. One example of this process is how insiders might wish to dominate public education through a government monopoly. Control of education is the main way to promote a dominant ideology and to increase the discretion that insiders need to promote their group’s agenda. The next chapter introduces the book’s central model of the supply side. Government agents become insiders when they can co-opt the state. The rent that insiders seek is labeled “ideological profit,” or P. Zupan identifies three factors that interact to produce this rent: potential ideological (G)ains, (S)lack, (I)nterest. Ideology is a desirable feature when it is directed toward achieving the public good, as in the case of Nelson Mandela, but the lack of accountability has a tendency to place in office those who promote their own interest above the public good. In this case, institutions have to be designed to take seriously both ideological rents and the threat interest groups pose.

Chapter 4 outlines how growth in government increases the potential for ideological gains. A larger government is more likely to have weak institutional checks on insiders’ activity. Weak checks lead to a variety of pathologies as insiders cater to special interests, exploit common-pool resources, and take advantage of weaker scrutiny through things such as “political clout” and “fiscal illusion.” Zupan concludes the chapter with an empirical challenge. Weakened accountability may lead to smaller government because of a discrepancy between voters and their agents, or it could be optimally efficient, as Donald Wittman argued. Zupan’s thesis suggests that we get too much government and that this oversupply represents the preferences of interest groups and insiders.

Zupan then argues that as governments grow larger, slack increases because transparency and accountability are harder to maintain. He promotes electoral competition as a remedy for growth in government. He uses an analogy of a pipeline to talk about government slack and the optimal size of government. As the circumference of a pipe increases, it can handle a greater volume of liquid in proportion to its materials. At some point, however, stronger materials are needed to contain this additional volume without compromising the pipe. Government similarly needs much stronger institutions as its size becomes greater. Breakdowns in competitive checks on the national government render interjurisdictional competition weak. Zupan compares this lack of competitive checks in government to the quasi-market of corporate governance. The managers’ incentives matter. Incumbents will use the tools at their discretion to hold onto power against the public interest unless the institutions make it possible to create a smooth management transition. Government growth might still occur when elections are contested, but that growth will be greater when accountability is reduced.

Chapter 6 offers virtue as a way to curb interest. With respect to rewarding political virtue, Zupan looks at cultural norms, property rights, and clear quasi-market institutions that push back against incumbency. One example of the power of incumbency is that all criticisms offered by challengers can be co-opted by the incumbent prior to the election in order to gain some of the challenger’s votes. As a proxy for virtue, incumbency is one metric offered to define ossification and corruption in government. The contestability check helps distinguish democracies from autocracies, where governmental regimes persist nine times longer on average. More electoral turnover might reduce the ability of agents to develop conditions necessary for ideological rent seeking.

Chapter 7 turns to empirical methods to measure how rents are captured. Zupan contrasts various theories of political freedom and economic freedom. He considers five hypotheses from Robert Barro; Daron Acemoglu and James Robinson; F. A. Hayek; Milton Friedman; and Robert Lawson and J. R. Clark. This discussion confirms that economic freedom is necessary for political freedom, but at some point government growth weakens economic freedom and therefore economic performance. Zupan applies this reading of the data to a narrative for growth and ossification in the experience of ancient Egypt, pre-Enlightenment France, and nineteenth-century New York.

Chapters 8 and 9 are very detailed cases, the first one about twentieth-century China and the other about public-sector unions in the United States. The chapter on China looks at the benefits of liberalizing a very centralized economy, and the U.S. case examines the growing sclerosis in government resulting from public unions as aninterest group. Demand-side forces interact with the supply of ideological rent such that both groups benefit from the expansion of government.

The conclusion applies the lessons of the book to policy prescriptions. These prescriptions include limiting public unions, promoting competition among providers of publically provided services, establishing term limits for incumbents, increasing accountability to weaken private benefits in government, improving transparency, and reining in debt.

The book is a valuable and innovative study of the market for government corruption. By dividing suppliers of political ideology from interest-group consumers, Zupan is able to apply the tools of corporate analysis to the public sphere. This is a useful analytical tool to explore. There are three principle areas of research outlined in this book: electoral competition, transparency, and accountability. In the latter area, Zupan’s thesis delivers the most detail by expanding on his equation of corruption. Accountability is most important when the public allows insiders to act on ideology. Accountability, surprisingly, can be provided in both autocracy and democracy by limiting the size of government and providing checks and balances for those who would supply this ideology.

This volume does not offer particularly shocking conclusions for readers of The Independent Review. However, it backs up its claims about economic freedom with an expansive analysis of its thesis and comprehensive global and historical cases. It would be a great book for a comparative-institutions class. It is certainly enjoyable and worth a read.