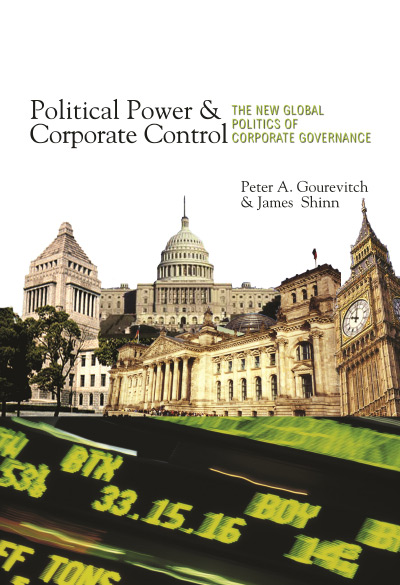 Political Power and Corporate Control
The New Global Politics of Corporate Governance
Peter A. Gourevitch and James Shinn
Kindle Hardcover Paperback
This book review appeared in the Summer 2007 issue of The Independent Review.

Comparative corporate governance has captured the interest of economists and legal scholars during the past two decades. With intensified economic globalization, it has become apparent that the public corporation, one of the keystones of the modern market economy, has produced very different systems of assigning authority in the firm around the world. In Political Power and Corporate Control, Peter A. Gourevitch and James Shinn offer a powerful political explanation that challenges the assumptions of a literature dominated by economic theory.

According to the predominant account, corporate-governance systems can be classified in two groups, the diffuse shareholder model and the concentrated blockholder model. The former is characterized by dispersed ownership of publicly traded firms and developed capital markets, whereas the latter is characterized by companies that have one or several large, core shareholders and capital markets that are somewhat less developed. In a global perspective, diffusion of ownership is rare and essentially confined to the large economies of the United States and the United Kingdom, whereas the blockholder model persists in much of the rest of the world, including the large continental European economies and Japan. Diffusion of ownership is often seen as the endpoint of an evolutionary development because firms belonging to a purportedly superior system should be able to outcompete others in the global marketplace. This view has led Henry Hansmann and Reinier Kraakman to announce the impending “end of history for corporate law” (“The End of History for Corporate Law,” Georgetown Law Journal 89 [2001]: 439–67).

Political scientist Gourevitch and former CEO Shinn propose a more complex picture that incorporates political mechanisms and the interests of other groups besides managers and shareholders, most importantly employees. Much of the economic and legal analysis of comparative corporate governance takes U.S. corporate law as its baseline, which in the popular perception leaves nonshareholder constituencies on the sidelines. The inclusion of worker interests into corporate governance, most prominently represented by the German system of labor codetermination, is often seen as simply an inefficient legislative distortion of the agency problem between shareholders and managers. Gourevitch and Shinn do away with the underlying assumption of complete contracts and point out that workers do care about job security, work conditions, and health and retirement benefits, and that they therefore have a stake in how the firm is run.

The authors develop their analysis around coalition building by managers, owners, and workers, which ultimately determines the structure of the respective corporate-governance system. The main policy outcomes are the minority shareholder protection (MSP) and degrees of coordination (DoC) variables. MSP is probably the predominant issue in current comparative corporate-governance debate. “Law and finance” scholars, led by economists Rafael La Porta, Florencio Lopez-de-Silanes, Andrei Shleifer, and Robert W. Vishny (see their article “Law and Finance,” Journal of Political Economy 106 [December 1998]: 1113–155), argue that good corporate law is required to prevent managers from shirking and self-dealing. Large shareholders extensively monitor managers in the blockholder system, but if corporate law is effective, they can unwind their inefficient risk position, thus allowing capital markets to flourish and diffusion to set in, which eliminates self-dealing by large shareholders. By contrast, Gourevitch and Shinn argue that the (negative) correlation between minority protection and ownership concentration is too small alone to explain corporate-governance structures.

Gourevitch and Shinn share Roe’s view that political factors mainly determine corporate governance, but they try to make the analysis more complex. The institutions of corporate governance in a particular country depend on the political coalitions that managers, owners, and employees form and on which coalition wins the political struggle. The authors therefore identify three possible intercoalition cleavages: class conflict (owners and managers versus workers), sectoral conflict (managers and workers versus owners), and property and voice conflicts (owners and workers versus managers).

One possible outcome of “class conflict” (the first cleavage) corresponds to the investor model typically described by the comparative corporate-governance literature. Agency theory predicts that owners and managers should agree to implement effective shareholder protection ex ante in order to reduce the ex post agency cost of shirking and self-dealing. It is often thought that ownership blocks will subsequently disappear. If labor defeats the owner-manager coalition, MSP will be low and DoC high, resulting in block ownership (and thus in efficiency losses, according to the mainstream economic perspective).

Gourevitch and Shinn disagree with both the mainstream economics perspective and Roe’s emphasis on labor power with regard to the empirical relevance of class conflict. They observe that blockholders do not, as the investor model predicts, lobby for political change favoring investor rights, but that in European countries such as France and Germany and in East Asian countries such as Korea changes in the law were not preceded by informal changes (such as voluntary disclosure to investors). Blockholders and businesspeople have actually opposed measures to improve transparency and MSP. Conversely, labor has rarely been able to “win” the political struggle without entering into a coalition with either of the other groups, and it may even support corporate-governance reforms aimed at the reduction of agency cost, as shown by events in Sweden, which is known for both high MSP and a strong DoC.

The second cleavage is characterized by a coalition of managers and workers on one side and owners on the other. Here, the victorious coalition will implement a “corporatist” model, which emerged during the hyperinflation of the 1920s, the Great Depression, and the period following World War II. Workers and managers sought consensus and cooperated to preserve social peace. Blockholders typically accommodated this situation, and minority shareholders remained on the sidelines. As the theory predicts, countries with strong corporatist values and structures—such as business centralization, wage-setting coordination, and cooperation between labor and management—invariably have strong ownership concentration and small MSP. The corporatist model, which in Gourevitch and Shinn’s view has dominated much of continental Europe and Japan since at least World War II, resembles the labor power model potentially resulting from the first cleavage, but differs from it in that managers and blockholders join the coalition.

The opposite outcome is the dominance of owners, for which Gourevitch and Shinn use the term oligarchy. Here, a few politically connected moguls, holding the largest blocks in firms and extensive political and economic power, face few constraints imposed by minority shareholders, managers, or employees. This outcome is typical of dictatorships as well as of democracies undermined by corruption, examples being contemporary Russia, the “robber baron” period in the United States after the Civil War, and crony capitalism in a number of developing countries.

The third cleavage is a new factor in the corporate-governance debate. Workers and investors may share a joint interest in transparency in order to curb managerial opportunism. Gourevitch and Shinn stress the incentives that pension assets create: as pension systems shift from government-provided “first-pillar” systems to firm-level “second-pillar” retirement obligations and individual “third-pillar” private pensions, managed by investment and insurance firms, workers are increasingly becoming owners of firms as well. Hence, they increasingly share minority shareholders’ interest in having independent, external directors on the board instead of conflicted insiders, including labor representatives. The authors’ empirical evidence suggests that the volume of third-pillar pension assets is positively correlated with strong MSP, as workers begin to press for corporate-governance reforms. This evidence leads the authors to conclude that Germany, for example, is currently undergoing a shift from the “corporatist” to the “transparency” model. In many cases, the political supporters of such reforms have been social-democratic rather than conservative parties.

The coalition model suggests no easy answer: no single cause explains variations in corporate governance, which are influenced by both the preferences of the relevant interest groups and the political environment in general. As Gourevitch and Shinn attempt to debunk the more conventional “class conflict” analysis underlying the investor and labor models, the ultimate explanatory choice will have to be either the “corporatist” or the “transparency” coalition because the obverse results (“oligarchy” dominated by owners and pure managerial agency failure) are unlikely to be successful long-term strategies. Which factor tips the scales between these alternatives? In the authors’ view, a corporatist compromise is more difficult to sustain in a majoritarian electoral system, where political parties are not forced to enter into coalitions to form a government. This interpretation conforms to the observation of dispersed owner-ship in the United States and the United Kingdom, but not on the European continent.

Gourevitch and Shinn’s analysis also lends itself, however, to another conclusion that is not quite so explicit. Contrary to the conventional wisdom, labor becomes the crucial player in corporate governance. The choice between the “corporatist” outcome and the “transparency” outcome depends on the group with which workers enter into a coalition. Workers’ preferences may be incorporated into a political compromise, but where a credible commitment to sustain a compromise is unfeasible, a significant proportion of workers must effectively be transformed into owners through the pension system. Corporate-governance structures may therefore be rooted in a society’s fundamental constitutional choices.

All in all, Political Power and Corporate Control provides a refreshing view of comparative corporate governance that strongly contrasts with the economic accounts dominating the field. It is a highly innovative and enlightening book that may be recommended to anyone interested in the debate.