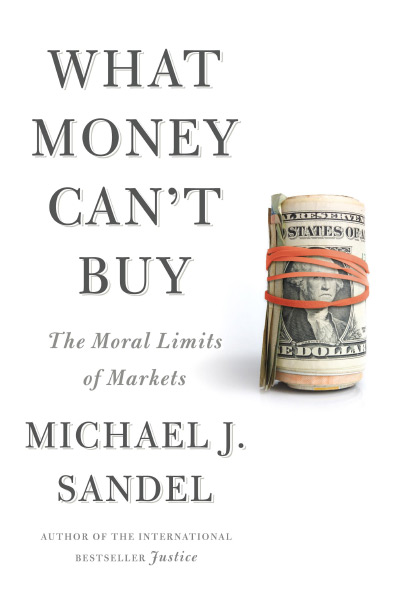 The conjunction of a stubbornly persistent economic recession, an apostatizing statement by a former Federal Reserve chairman claiming that financial markets’ ability to self-correct may have been overestimated, and a resurgent interest in progressive social policies has caused scholars across the board to reevaluate the relative strengths and weaknesses of the market process. Much of the current empirical work is aimed at designing more efficient market regulations. A parallel effort is given both to reconsidering the morality of the market process itself and to asking whether society’s broad reliance on markets represents an appropriately moral social choice. If the market process stumbles on moral grounds, then the way will be eased for more progressive regulation of markets and of social institutions generally en route to creating an ostensibly more perfect—albeit still illusory—concept of social justice.

Joining the recent literature on markets and morality is the latest book by the popular philosopher Michael Sandel, entitled What Money Can’t Buy: The Moral Limits of Markets. Sandel considers whether markets and market values have come to dominate aspects of life where morally they don’t belong. Are there, in other words, some things that money can’t—and furthermore shouldn’t—buy?

This book rises on two legs. One is fairness, arguing that economic inequality causes money and markets to matter more now than in the past. The second leg, which borrows tacitly from Kant, argues that valuing certain goods in money terms corrupts their nature by depriving them of some essential dignity. Sandel acknowledges markets’ ability to allocate goods efficiently, but he argues that efficiency entails morally corrosive and corrupting social costs: “we corrupt a good, an activity, or a social practice whenever we treat it according to a lower norm than is appropriate to it” (p. 46). He offers numerous examples of activities that were once guided by long-standing social norms but recently have become infused with market values. He questions throughout whether this truly is the way we want to live.

Ostensible examples of moral corruption fall under four heads: (1) market opportunities for buying our way out of public queues, where earlier norms obliged everyone, regardless of social status, to wait their turn; (2) incentive payments that displace voluntary cooperation and that otherwise compensate individuals for behaving as they ought to anyway (Sandel’s consideration of “fines versus fees” coincidently brings to mind the reviled play-or-pay provision of Obamacare); (3) insurance schemes that arguably have evolved into open gambles involving life and death hedges; and (4) programs that unabashedly award public and private honors in exchange for cash. These examples conceivably represent a coarsening of American culture, although compelling efficiency arguments can be raised in the defense of each, as Sandel candidly acknowledges. The book therefore is asking us to consider whether the efficiency gains created by the intrusion of market values outweigh the costs imposed on the moral sensibilities of society’s most philosophical critics. Put differently, the question is, How much ought we be willing to pay for the opportunity to live in a kinder, gentler, and somewhat less prosperous social setting? The answers are neither obvious nor unambiguous.

The book’s most tantalizing chapter explores “how markets crowd out morals” (pp. 93–130). The examples here, as elsewhere, are both interesting and provocative. The key principle concerns the relationship between the market process and social signaling (p. 101). Mankind has evolved as a eusocial species that instinctively and rationally incurs great expense to signal trustworthiness and cooperative intentions. These signals must be costly in order to be credible, and the wealth transfers they entail are easily and often mistaken for pure, irrational, moral altruism of the sort Sandel prizes. Signaling breaks down, however, when individuals have the option of behaving mercenarily—as, for example, when blood can be either donated or sold and when charitable contributions can be solicited either by volunteers or by paid workers. Signaling is impaired in these cases because the underlying message is ambiguous. The upshot, as shown by one of the cited studies, is that activities that can be performed only on a voluntary basis may be more productive than activities that can be performed either for no cost voluntarily or for compensation. The difference between productivity levels is a rough measure of the signaling value that is lost to “marketization.” Destroying the signaling potential of particular activities by commercializing them is hardly the end of the world, however, because signaling occurs in myriad ways.

Unfortunately, neither Sandel nor the authorities he cites fully comprehend the nature of this signaling process. As a consequence, the observed differences in productivity are attributed erroneously to a loss of “altruism.” Sandel concludes that “ethical behavior is a commodity that needs to be economized” (p. 126), and he quotes the distinguished economist Kenneth Arrow in support: “‘We do not wish to use up recklessly the scarce resources of altruistic motivation’” (p. 127). He relies similarly on the economist Lawrence Summers, who believes that “‘[w]e all have only so much altruism in us. Economists like me think of altruism as a valuable and rare good that needs conserving. Far better to conserve it by designing a system in which people’s wants will be satisfied by individuals being selfish, and saving that altruism for our families, our friends, and the many social problems in this world that markets cannot solve’” (p. 130). Scarcity, of course, constrains benevolent behavior whatever the motivation, but this is a different matter than averring, as Arrow, Summers, and Sandel do, that the quality of “altruism” is strained in other ways by overuse.

The book concludes with a cascade of normative moral implications. To wit:

[O]nce we see that markets and commerce change the character of the goods they touch, we have to ask where markets belong—and where they don’t.... For fear of disagreement, we hesitate to bring our moral and spiritual convictions into the public square. But shrinking from these questions does not leave them undecided. It simply means that markets will decide them for us.... Our only hope of keeping markets in their place is to deliberate openly and publically about the meaning of the goods and social practices we prize. And so, in the end, the question of markets is really a question about how we want to live together. Do we want a society where everything is up for sale? Or are there certain moral and civic goods that markets do not honor and money cannot buy? (pp. 202–3)

These statements raise a collateral moral issue that parallels Sandel’s inquiry regarding “how markets crowd out morals.” The pronouns we and our strongly imply the desirability of government action to compel particular forms of social behavior. Some inquiry into how government “crowds out morals” is therefore both warranted and expected. None, however, is provided. The point to be taken is that government, by imposing social norms that lack moral universality, absolves individuals of all moral obligations other than a duty to obey the law. Government unavoidably crowds out moral behavior when it prescribes a priori which social relationships are to be left to the market process and which are to be withheld from it. The moral consequences are observable, for example, in the banning of tobacco use in public places. The philosopher Adam Seligman notes that smoking “was no longer something to be negotiated by the partners to the interaction but was now solely the function of legal and abstract dicta. Where I was legally prevented from smoking, I did not smoke, but where it was legally permitted I stopped thinking to ask people if it bothered them. If I could smoke, I did. I was no longer negotiating the boundaries of acceptable behavior” (The Problem of Trust [Princeton, N.J.: Princeton University Press, 1997], p. 173). Readers might be disappointed that Sandel does not explore the crowding out of morals by government in this manner.

The slope of Sandel’s book is at once seductive and slippery. Social choices involving the scope of markets and market values require more comprehensive thinking than this book’s cursory analysis delivers.