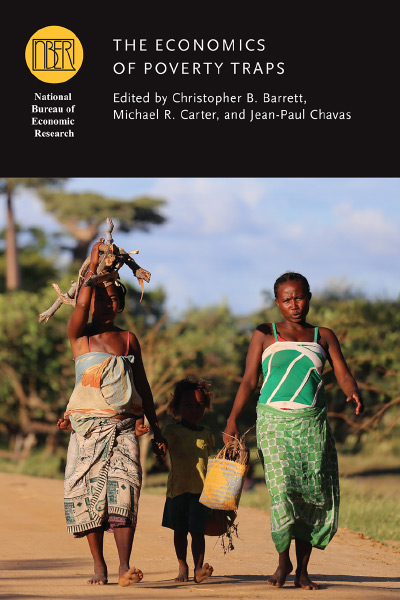 The Economics of Poverty Traps
Edited by Christopher B. Barrett, Michael R. Carter, and Jean-Paul Chavas
eTextbook Hardcover
This book review is a web exclusive for the Fall 2019 issue of The Independent Review.

I sometimes think many economics professors must have been absent the day they were meant to learn economics in graduate school. Economics is a phenomenal subject with nifty little tools and ways of thinking that can illuminate all kinds of fascinating puzzles about human behaviors, choices, social and political outcomes, and a myriad of topics you would never think had anything to do with economics—a flexibility and usefulness that has led many, often unhappy scholars in other disciplines to label economics “the imperial discipline.” But if you read much academic economics you’re probably left scratching your head wondering what all the fuss is about. The magic, and the insights, and the fun all seem to have run off to join the empire in those other disciplines.

Such was my mood by the time I finished reading the twenty-page Introduction to The Economics of Poverty Traps. The good news about edited volumes is that if one chapter is a disappointment you can always look forward to a fresh start with a different author in the next chapter. In this respect the book provides some much needed, if only episodic, relief—but still comes up far short on a topic that is full of opportunity and desperately in need of understanding. There is not enough room here to do justice to this injustice, so I will discuss a few points which stuck out most prominently and may be of general interest to readers of this journal.

But first, what are these poverty traps of which they speak? The concept of a poverty trap, itself not new in the literature, is that some poor people may find themselves in situations where the best choices for themselves at the time may be ones that will perpetuate their poverty in the future (even, potentially across generations). Imagine a stylized example. You have a choice: do you undertake training that could eventually lead to a trade that would make you more money or do you focus on working at a lower paying job and feeding your family? This is more of a working-class versus middle-class version of an equilibrium trap to illustrate the concept to relatively wealthy readers, but similar trade-offs are made by the poor and ultra-poor around the world, just with generally much worse options. Of course, the thoughtful reader will realize these are choices that everyone at all income levels, perhaps short of trust fund, makes. The point is people could find themselves in an equilibrium where in the short-run they make choices consistently that prevent them from enjoying more long-run income growth.

Economists tend to mathematically model these types of choices as what are known as maximization problems subject to constraints. The person or economic planner making a choice wants to maximize something, let’s say income, and they can’t just have all the income they want. Like the rest of the world they have to contend with the fundamental economic concept of scarcity—we have to make our choices based on the constraints we face in our particular circumstances of time and place. Economists take this fundamentally important insight of economics and turn it into a math problem. If you take high school calculus you learn you can maximize a point on a curve using differential calculus; this is static optimization. If you take more advanced mathematics, usually in college or graduate school, you learn that you can optimize not just points (like the highest and lowest point on a curve in algebra) but entire paths over time; this is dynamic optimization.

Suppose you find yourself involved in a space race with the Soviet Union and you want to figure out the optimal path to send a rocket to the moon subject to the constraints of the least amount of fuel to minimize the launch weight of your space craft and other pesky things like gravity, friction, and bad 1960s computers. You would hire some really smart mathematicians and engineers to invent some mathematical techniques (which now generally fall into three different categories we don’t need to worry about here) to solve the problem for you. If, on the other hand, you want to make poor people well-off (instead of sending a rocket to the moon) you hire some economists to do the same math. But instead of optimizing the flight trajectory you optimize the person’s or country’s long-term flow of income subject to constraints like physical capital, natural resources, and budgets. And, voila! you win the space race and solve global poverty all with a few differential equations.

I wish I were making this up; but I’m not. A lot of very, very smart economists spend a lot of time doing just that, and when I read their papers and books my initial reactions are often somewhere along the lines of: why has God forsaken us?! Please understand, this is not anti-intellectualism or anti-mathiness on my part. I like math; I like math a lot. I take online classes in math, physics, and statistics for fun. But I can’t remember the last time I felt like I gained real insight about the economy or people’s economic lives by reading math problems. However, the editors of this book, very successful, highly-regarded economists, apparently disagree with me. They go to some length to illustrate these models and feature papers that utilize them to address the issues of poverty traps and what choices and constraints can sort people out onto paths that perpetuate poverty. I read them more as exercises to try to build more complex math problems that are doomed never to be able to capture the true complexity of the economy and human choices, and find my notes in the book margins full of sarcastic comments like “shazam!” “facepalm,” and “oh, boy!”’ when they math their way to not-particularly-surprising results.

Fortunately, there are some interesting papers in the collection that are based on case studies or which introduce more robust ideas from other disciplines like psychology into the discussion that help us broaden our understanding of how poverty operates. As far as I can tell no space races were won in these particular chapters, but I actually did feel as if I learned something useful from reading them. A discussion of the findings of what seem like a heroic amount of field work collecting data in Indonesia before and after the 1998 financial crisis and the devastating tsunami of 2004 which killed approximately 170,000 people, show how the shocks contributed significantly to short-term negative welfare effects in both cases, but the longer-term impact on human capital development among children following the shocks was significantly less than anticipated based on prior assumptions. For example, the death of one or both parents in the tsunami had no long-run impact on the educational attainment of children below 14, but older children were more likely to finish less schooling and either enter the work force or marry earlier than otherwise expected. A lengthy 60-plus page chapter reviewing the psychology literature on cognitive function provides a fascinating overview of the topic for those unfamiliar with the literature and offers hypotheses on how poor cognitive function may play a role both as a potential cause of poverty and an outcome of poverty in some cases.

Another psychology-inspired chapter on depression failed to provide as many insights as it could have with this extremely important and still largely socially taboo topic given that the authors tried to “economics” the topic to ghastly effect. As the authors correctly note, depression is one of the most widespread, costly, and poorly understood medical conditions in the world and one that deserves a great deal more attention. Alas, I was left doing double takes over head-shaking sentences like: “loss of emotional attachment, reduction in gratification, and loss of mirth response are, in our view, best understood as consequences of a low marginal utility of consumption of experiences, relationships, and humor.... Put differently these symptoms appear to be about preferences rather than beliefs” (p.132; emphasis in original). Again, dear reader, I wish I was making this up. Please just go back to doing harmless math! (emphasis in my original thoughts).

Regular readers of this journal will no doubt be familiar with the important and overwhelmingly empirically-convincing work done in recent decades on the relationship between economic institutions and economic growth. Readers of this book will not know it exists. Yes, it is unhelpful to simply say: “they need better institutions.” But it is equally unhelpful to say “they are solving dynamic optimization problems in the absence of institutions.” The editors briefly, but correctly, note the enormous decrease in poverty worldwide in recent decades. Every semester I tell my students it is one of the most important economic events in the history of human civilization and almost none of them have ever heard about it. One wonders why in the face of such a world-historic collapse in poverty scholars wouldn’t look more at the causes of its collapse rather than its diminishing persistence for insights. But perhaps one shouldn’t wonder about that when the editors conclude “the core challenge of escaping persistent poverty boils down to overcoming the market failures that impede the accumulation of assets” (p. 16).