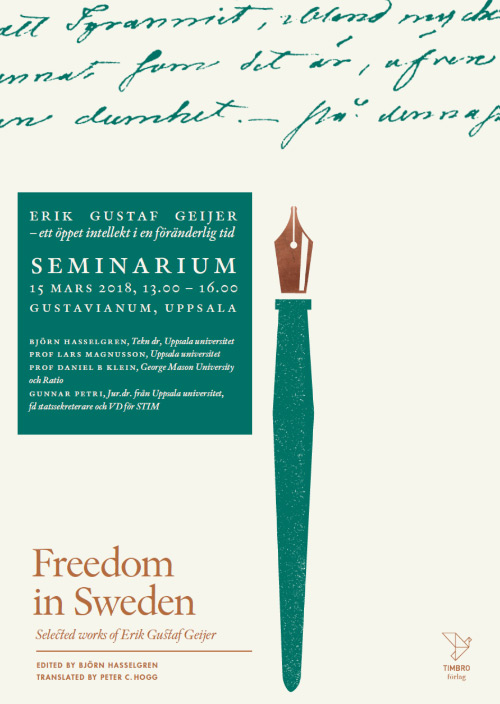 Besides being a history professor in Uppsala, poet and composer, Erik Gustaf Geijer (1783 - 1847) played an important role in the political and economic transformation of Sweden in the middle of the nineteenth century. The direction of his influence is indicated by the naming of this volume. The book contains, in addition to the translations of essays written by Geijer, an introduction by the editor and an overview of Geijer's life and production by Lars Magnusson

Geijer's farther was an ironworks proprietor in the province Värmland of Sweden. Geijer started his academic studies in Uppsala in 1799 and was expected to return with a degree three years later. Social life among the students, however, was intense in Uppsala and to the family's disappointment Geijer returned without a degree. The economic capacity of his family was limited and his prospects for continued academic studies were not bright.

Then the miracle happened. Without anybody in the family knowing he wrote an essay, Panegyric on the Regent Sten Sture the Elder (1803), and participated in a competition announced by the Swedish Academy. He won the first price and could then with regained reputation continue his academic studies. The essay was not very original but the inclusion of a translation of it in Freedom in Sweden can be motivated by the fact that it deals with a late medieval movement where Swedes tried to liberate their country from the Scandinavian union with Demark and Norway.

After getting his degree in 1806 he got a job as a private tutor to the son in a rich Stockholm family. The pupil and the teacher left the country in August 1809 for a year-long visit to England. Here Geijer not only got acquainted with English life and culture, he also studied Scottish moral philosophers and political economy. He continued to follow the development and the debates in Great Britain for the rest of his life.

Geijer was appointed professor of history at the University of Uppsala in 1817. His first important publication was Feudalism and Republicanism published in two consecutive numbers of the journal Svea 1818 and 1819. The text was consequently published a few years after Waterloo. The fall of Napoleon marked the endpoint of a long period starting with the French Revolution. Most of the European countries were affected by the turbulence. For Sweden, these events led to the loss of Finland in 1809, the dethronement of Gustav IV Adolf, and the creation of a new constitution.

The question now arises: can this historical evolution be understood? Are there laws guiding the historical process? When Geijer presented European history from the migration period to the end of the seventeenth century he did not give the usual chronological account with dates, names and events but tried instead to uncover the main currents underlying the historical development. This would implicitly also throw light on the mechanisms underlying the turbulent years starting with the French Revolution.

Geijer thought that there were two prevalent ways of looking at the society – it could be artificial or natural in its origin. In the first case the present society was created by a compact, for example as assumed by Thomas Hobbes. To avoid chaos and everybody's war against everybody the people had delegated a central agency - a king or a dictator - to make all decisions. A problem with this social contract (besides its lack of empirical basis) is that if the compact is agreed upon at a certain point of time - how are preferences of future generations taken into account?

The second way of looking at society stands in contrast to the abovementioned theoretical construction. The "present" society is only conceivable if public opinion maintains it – it is created by necessity. But society is not as stable or natural one as one may think. The history of Europe gives examples of seemingly stable societies that have undergone radical changes.

The development of feudalism by the Franks was, according to Geijer, a result of the Germanic way of looking at the relationship between people and the technology of warfare at the time. It was a hierarchical system starting with the royal family at the top and with successive lower layers where land was given in fief. In return for its privileges the nobility was by a bond of honor expected to stand behind their superiors and participate in military operations.

The feudal system was, beginning with the age of the Crusades, challenged by another mode of organizing society. It was the increasing trade and the development of fortified towns. People who were unfree under the feudal lord could gain independence by moving to the towns. Here people were bound by a common interest to defend their town. The increasing use of money and extended division of labor would later lead to the emergence of professional soldiers. In contrast to the feudal principle Geijer here talked about the republican principle where "all power and justice emanates from below, through delegation by the people" (p. 162). The two principles had one point in common. The monarchy was, according to Geijer, both feudal and republican.

The revolution in England in the middle of the seventeenth century and that of France more than one hundred years later have great similarities. In both cases the king was decapitated, the revolution ran amok for some time, and was then superseded by a military dictatorship. Geijer could thus point at similarities in the historical development. This does not mean, however, that the historical development can be anticipated: "One may observe that human enterprises often have the most profound consequences, though those consequences are not the ones that the originators envisaged but often quite different ones" (pp. 217-18). In spite of this, there are regularities and causal factors to be search for by the historian.

In Reflections on the Establishment of the European Colonial Dominions (1819) Geijer discussed (among other things) why the economy of Spain did not prosper during the sixteenth and seventeenth centuries: "Industriousness cannot be prescribed. Philip II's literally lethal policy drove it out of Spain and made himself poor, in spite of all the gold and silver of America [..] although even in the days of [his father] Charles V it had been among the richest in crafts and industriousness in Europe" (p. 328). Was it an early example of the Dutch disease?

Geijer had a market conservative attitude in the beginning of his career as a professional historian. One reason may have been the experience of the French Revolution. Liberté, égalité, fraternité were the catchwords of the French Revolution. Of these the first, liberty, was lost in the bloody terror. It is moreover no coincidence that Edmund Burke’s manifesto of conservatism bears the title Reflections on the Revolution in France (November 1790). Another reason may be the sheltered environment in which Geijer lived in Uppsala during the 1820s and 1830s. It was a secure and good family life. Geijer and his wife had many friends who they met on Friday evenings at Malla Silfverstolpe's home where the dinner was followed by readings and music performances.

It seems, however, that Geijer got more and more dissatisfied with only lecturing and writing about past events. Industrialization was now spreading from England and reaching the European continent. Questions about the freedom of trade in a society marked by regulations of different kinds (including the guild system) and a possible reformation of the representative system (which at the time was based on the four estates) came to the fore. Geijer's defection from conservatism was symbolized in his poem On the New Year's Day 1838 which starts with the words "Alone in a fragile vessel" symbolizing that he took a leap which might endanger the good social life and warm friendship with the Uppsala circle in which he lived.

Geijer started his new life as a liberal by writing a number of essays in Litteraturbladet (1838-40). Some of these were published under the title The Poor Laws and their Bearing on Society translated into English and published by Lars Johan Hierta (the editor and owner of the famous liberal newspaper Aftonbladet) in Stockholm (1840). The essays do not only deal with policies to relieve poor people but also with criminal policy and, most important, population growth and economic development. Geijer was acquainted to Malthus's discussion of the population issue but his conclusion was more optimistic than that of Malthus. One reason might be the (still rather small) emigration to America, another the positive effects on income of industrialization.

Freedom in Sweden contains a summary and comment by Hasselgren of the Poor Laws Essays. Here Hasselgren points out the importance of the institutional framework and the incentive structure for promoting economic progress. Geijer consequently participated in making public opinion ripe for the economic reforms in Sweden in the middle of the nineteenth century. Examples of these economic reforms are the abolition of guild system in 1846, the corporation law of 1848 and the decree on freedom of trade in 1864.

One year before his retirement Geijer gave three lectures in the history course in Uppsala which were later published. The first of these lectures and a part of the third are translated into English and included in Freedom in Sweden and given the title On the Internal Social Conditions of Our Time, with Particular Reference to the Fatherland. Geijer here discussed industrialization, the more intensive economic competition and the rise of a wealthy and well-educated middle class. The interests and abilities of this new social class were, according to Geijer, not taken care of in the old political system where the people was represented by the four estates (nobility, clergy, burghers and farmers).

The translated parts of Geijer's Freedom in Sweden do not give a representative sample of his historical writings. These were of a more traditional kind relating historical events in a chronological order, for example as in The History of the Swedes (translated by J.H. Turner, Whittaker and Co., London, 1845). The parts found in Freedom in Sweden contain instead an analysis of the historical process. In this sense one may say that it is an early example of social science. Geijer was consequently not a persistent empiricist - he did not abide by Leopold von Ranke's maxim that that history should be told "the way it happened." He also wanted to see if there was a structure in the historical development that could be analyzed - even if projections were futile. In this striving he was a precursor to John Hicks (A Theory of Economic History, Oxford: Clarendon Press, 1969) and Douglass C. North and Robert Paul Thomas (The Rise of the Western World, Cambridge: Cambridge University Press, 1973).

Geijer's text may not have been easy to translate. Swedish texts from the nineteenth century are often quite vague. The vocabulary is, moreover, rather different from modern Swedish. Taking this into consideration I think that the translator, Peter C. Hogg, has captured the feeling of the texts quite well. In order to make the reading easier it would, however, have been a good idea to insert margin notes in the translated texts.