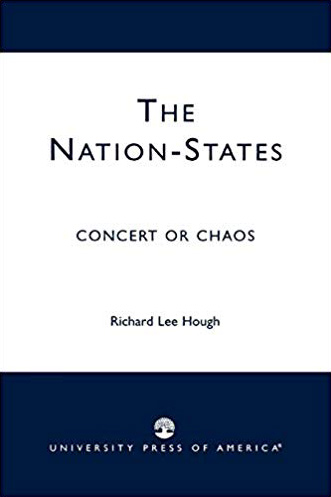 The Nation-States
Concert or Chaos
Richard Lee Hough
Paperback
This book review appeared in the Winter 2004/05 issue of The Independent Review.

Richard Lee Hough seems well prepared for this concise study of the nation-state and its connection to both international institutions and the growing U.S. empire. As a retired U.S. foreign-service officer who has worked in the Third World and a visiting faculty member at distinguished U.S. universities, Hough brings to his work the benefits of professional experience. His examination of international-trade organizations and of the International Criminal Court shows extensive knowledge of their workings, knowledge that is undoubtedly related to the work he has left behind. He has done considerable reading in the history of the European state system, which is apparent from his learned references. (We shall indulge him the oversimplified view of the two world wars as caused by Germany’s unique “primitive nationalism” [p. 16].) Such reading is reflected in his commentary on what is still relevant about the nation-state as a basic political unit. Finally, Hough’s criticisms of turning the U.S. “unrivaled power” into a justification for “unilateralism” should please those who question the wisdom of the present U.S. mission to bring “democracy” to the heathens, no matter what the rest of the world wants or thinks. Hough’s admonitions should resonate well among most of his readers, assuming that they are not devotees of Fox News or attached to the misnamed American conservative movement.

Having said all this, I should note what is wrong with The Nation-States. Hough’s central contention, about the imbalance that exists between overreaching nationalists and the efforts being made to achieve an international order, entails a doubtful proposition if one looks at the Western world. From Hough’s account, the main danger facing Euro-American countries—but one that he concedes is more of a problem elsewhere—is that nationalism and unilateralism are overriding the need for international agencies to decide matters of global concern. And the U.S. refusal to bow to international courts, environmental agencies, and United Nations resolutions consistently enough has encouraged similar defiance from smaller countries. Why should these countries uphold environmental and other standards that the world’s leading empire is openly flouting?

Hough makes these charges while also asserting that “the nation-state is the core unit of order in an interconnected world. There is nothing to replace it. Its disintegration invites lawlessness” (p. 125–26). Nonetheless, two sentences later he complains that the insistence on national sovereignty and its “obsessive defense” are “misleading and increasingly outdated in view of emergent reality” (p. 126). Hough takes for granted that a stubborn defense of nations will continue to stand in the way of “emergent reality” because nation-states are entities that will “preserve their identity” no matter what. But why should a perceptive observer of European politics believe this claim? The European nations’ piecemeal surrender of their sovereignty to the European Union (EU)—which is now culminating in the imposition of an EU constitution on its members, the subreplacement birth rate of almost all native European populations, and the European governments’ adoption of multicultural policies often favoring the growing Muslim immigrant population—should make Hough reconsider his position concerning a permanent nation-state system in the West. Countries, even major ones such as Germany, are now ceding much of their sovereignty to a supranational administration without recognizing the people’s right to vote on this question. Where are the “counter pressures among the population” that Hough insists will preserve nation-states in the face of any progress toward international control? Signs of it can be seen in the Independence Party (IP) in England, which has risen to oppose “Brussels which is really Berlin.” However, the anti-EU Englishmen grouped in the IP, “who mistake Eurocrats in Brussels for their hated former German enemies,” constitute only 18 percent of the British voters. Most of the rest of the English population presumably will give up what remains of English sovereignty, now anchored in the shaky foundations of a multicultural administration, to the EU. Although Hough quotes Martin Van Creveld’s heavily documented book on the death of the European nation-state, he also for the most part ignores its findings and conclusions.

This evidence is arguably still open to question, and Hough may eventually be able to establish his countercase that nation-states everywhere in Europe are thriving. Indeed, it may be possible to prove that EU control will make nation-states much stronger, as Hough contends, in ways that until now have not been made clear. Still, to convince us of his vision, he must do something beyond making bald assertions. One apparent piece of evidence he cites of nationalist obstinacy—in some quarters the skepticism about the jurisdiction of international courts to try political leaders suspected of applying torture or committing “crimes against humanity”—does not indicate what he says. As Hough suggests in bringing up relevant “problems,” it is difficult to divorce such judicial acts from ideological and vindictive motives. The arrest of Chilean general Augusto Pinochet in London in September 1998, during what had begun as a pleasure trip, for having inflicted violence on his political enemies, was a bad omen for life under international jurisdiction. The British Law Lords’ approval of the writ of arrest from Spanish judge Baltasar Garzon, which claimed that Pinochet was an international outlaw, revealed the unseemly leftist bias of those involved in this action. British Labourites and Spanish Socialists collaborated in destroying the immunity that political figures had enjoyed since the seventeenth century in traveling to countries with which they are not at war. They did so not because they were appalled at the killing that went on in Chile. What must be considered is that, in contrast to Fidel Castro, who went to Spain in 1998 to receive a freedom award, Pinochet had not destroyed his enemies as a communist revolutionary. He had applied violence in putting down the Marxist government of Salvador Allende. Although Castro has killed many times more victims than did Pinochet, and not during a civil war, he has not suffered what Hough believes to be Pinochet’s proper fate, having the nationals of many countries bring charges against him in international courts claiming “universal jurisdiction.” Would anyone care to guess why the two situations have not been treated in the same way, despite the far greater violence Castro unleashed?

Finally, it is difficult for me to see why Hough should be rejoicing that “the concept of globalization of justice has gained judicial traction while the canon of sovereign immunity of heads of state and other senior officials has been breached” (p. 27). Does he imagine that the new justice represents a purer kind than the one that we now have? Surely it is not more impartial, nor is it closer to what (relatively) self-governing people might be able to control. If Hough believes that nations must practice “a concerting of power in order to cope with the global problems beyond their reach acting individually” (p. 128), then he should come up with better examples than the ones he has provided. And if he wishes to stress that “nation-states will be strengthened by giving up some of their power” (p. 129), then he must show us cases in which this can happen. For all of his talk about “looming dangers,” Hough does not prove that it would be in the interest of the United States or of any other Western country to yield its sovereignty to the institutions he touts. Although a demonstration of his heartfelt view may still be feasible, this book (alas) does not offer one.