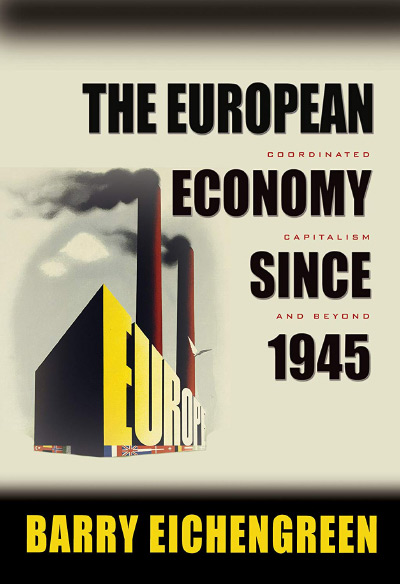 The European Economy since 1945
Coordinated Capitalism and Beyond
By Barry Eichengreen
eTextbook Hardcover Paperback
This book review appeared in the Summer 2008 issue of The Independent Review.

Barry Eichengreen’s book The European Economy since 1945 presents a detailed introduction to the economic history of western Europe since World War II, plus a chapter on the history of central planning in eastern Europe and another on the process of transition from the economic environment typical of the Soviet Empire to a free-market environment and the European Union. Those who read it all will not be disappointed. They will find comprehensive information on the postwar situation and the reconstruction, as well as a thorough description of the integration process that led to the Treaty of Rome (1957) and the European Union, with particular emphasis on the monetary aspects. The hurried reader will be satisfied, too, because each of Eichengreen’s chapters can also be approached as a self-contained, well-researched, and thought-provoking essay in its own right, dealing clearly yet comprehensively with periods and episodes in recent western European history.

Not surprisingly, the author had to make several choices: whether to insist on quantitative technicalities or to discuss the extent to which political contingencies played a role and affected economic events, whether to make an effort to represent the European phenomenon as one general picture or to emphasize the national peculiarities, and so on. The author seems to have made his decisions by identifying the typical reader for whom he was writing the book: someone curious to know what really happened in Europe during the past sixty years, eager to have a broad representation before diving into more rigorous economic and political investigations or developing his own thoughts.

Of course, the author does not offer simply a list of events and comments. The introduction serves readers who seek a wide-ranging, encompassing theoretical framework. Eichengreen’s organization is simple and effective: western Europe’s economic history may be divided into three economic stages and two institutional periods.

Stage one covers the first fifteen post–World War II years. The central idea is that during this period western Europe took advantage of its human capital and its prewar institutional traditions to absorb technologies previously developed in the United States. As a result, it transformed its rather antiquated production structure, and productivity increased at impressive speed. This development was not a miracle because (incomplete) catching up can hardly be defined in such terms. After all, as the author recalls toward the end of the book, there was no need to invent much; in the late 1940s and in the 1950s, Europeans had only to follow the American lead. Nevertheless, their catch-up effort was a big success, and things might easily have gone wrong, especially if the political and institutional conditions had been different. For example, soon after the end of World War II, the Communists might have taken over the government in Italy; without the Cold War, Germany might have been forced into permanent deindustrialization; and at the end of Franco’s regime, Spain might have fallen into stalemate or institutional instability.

Stage two covers the 1960s and part of the 1970s, when the opportunities for technological catch-up became almost exhausted, and western Europe came close to its potential production capacity. This stage’s distinctive feature was the gradual opening up to international trade. In particular, the Common Market was established and came into operation, and the acceptance of an increasing degree of currency convertibility created new incentives to sustain investment and to engage in riskier ventures.

Finally, stage three includes the years when European producers had to find new sources to promote (intensive) growth. Eichengreen maintains that this search continues to be the main European challenge today, when the rules of the game that promoted success in the past (cooperation among the social classes, encouraged and guaranteed by the politicians) have become a handicap to entrepreneurship, autonomous technological progress, and hence ultimately faster growth in living standards.

The institutional key to understanding Europe’s economic development is actually the more interesting and possibly controversial element of the volume, and it is a pity that the author refers to this thesis only occasionally, without developing it in a fully articulated theory. In brief, according to Eichengreen, western Europe’s distinctive institutional feature has been its reliance on the corporatist state, wherein trade unions, employers associations, and politicians have engaged in a systematic, centralized, negotiation process that ultimately has guaranteed stability, reduced uncertainty, and produced real-wage changes more or less consistent with productivity changes.

During the thirty years or so that followed the end of the World War II, corporatism (the author calls it “coordinated capitalism”) made extensive growth possible. In particular, Eichengreen argues that during stage one, Europe required significant (public) investments in infrastructure; a relatively generous welfare state to persuade workers that greater reliance on machines would not be a threat to employment; sustained confidence in the free-market system as the driving force to allocate resources; and adequate political strength to establish the rule of law (whatever it meant) and make it credible. During stage two, workers and producers needed to be shielded from the dangers of increased competition, a consequence of lower trade barriers, both within the “Six” and vis-à-vis the rest of the world. According to Eichengreen, in both stages only state intervention and a general, more or less formalized social agreement (corporatism) could provide the necessary and sufficient elements that allowed the increase of fixed capital and exploited the existing stock of technological knowledge (extensive growth).

Postwar corporatism began to decline at the end of the extensive-growth epoch, when inflationary monetary policies were adopted. Sluggish growth and rapid inflation created unrest among the workers, and social unrest gradually began to surface. Lack of wage-rate moderation and an increase in government expenditure designed to meet workers’ demands led to even lower growth rates, culminating in the quasistagnation that prevails today.

A careful analysis of the logical consistency of Eichengreen’s thesis lies beyond the scope of this review. Whatever the argument’s strengths and weaknesses, however, many readers would have appreciated a deeper discussion of its elements. For example, one might be inclined to accept that growth entered its critical period when central banks engaged in active monetary policies, disregarding the constraints set by the increasingly integrated world capital markets. One might call this monetary action “bad cooperation,” to follow Eichengreen’s vocabulary. Others might simply call it bad policymaking. Similarly, many observers have noticed that Europe’s relative decline began not only with the expansion of public expenditure beyond tolerable limits, which fostered the monetary acceleration, but also with growing public debt and greater reliance on the welfare state, the instrument through which politicians justified their race to power, as well as both the solution to individuals’ problems and the response to their reluctance to accept responsibilities. The rise and fall of Eichengreen’s coordinated capitalism surely includes more than what the advocates of indicative planning assert and more than what public-choice explanations of bad policymaking offer. One wonders whether this “coordination” was the outcome of purposeful design or of a spontaneous order. What drove its dynamics in the various countries, and why has it turned out to be a lasting liability for the past twenty years?

Questions about the virtues of corporatism also await further discussion from a broader standpoint. One may recall the failures of the old guild system, in which politicians, entrepreneurs, and skilled workers set the rules of the game with dubious results. Or the situation in the 1930s, when much of the West (including the United States) featured corporatist agreements. Or the case in our own times, when many western European countries (Italy, for example) retain significant corporatist features. To be fair, Eichengreen might reply that this doubt is actually his point: corporatism is the solution to the challenges raised by extensive growth, but not to those raised by intensive growth—that is, growth driven primarily by innovation. He might add that the centralized features of corporatism actually become a burden when a country most needs entrepreneurship, flexibility, and prompt reactions to sudden changes in market conditions and, more generally, in the relative price structure. In these circumstances, he might conclude, corporatism leads to bad policies (by central bankers, for example, as noted earlier).

Finally, one cannot avoid considering that the difference between economic success and failure ultimately depends on the prevalence of economic freedom (some call it capitalism, others the free market). The neoliberal and the Ordoliberal traditions suggest that economic freedom can be obtained only through mandatory, state coordination. Eichengreen takes the same position, but he adds that this relationship holds only for a limited period and under specific historical and possibly cultural conditions. His pages devote much attention to documenting such specific conditions in postwar Europe. Perhaps another volume is needed to investigate the waning of those conditions.