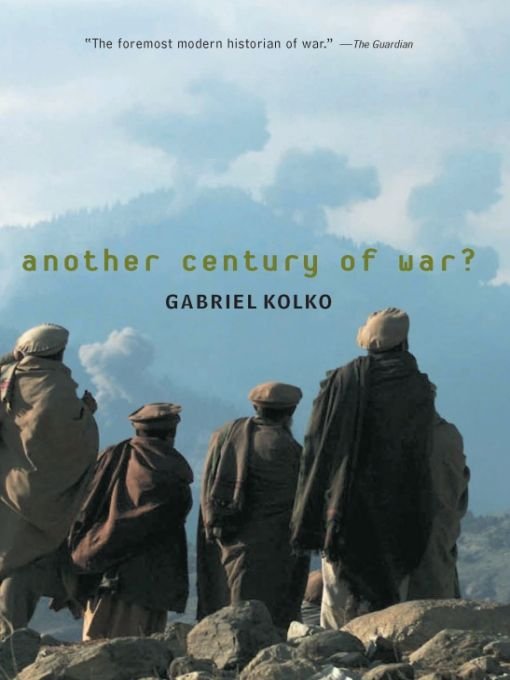 Another Century of War?
Gabriel Kolko
Kindle Paperback
This book review appeared in the Fall 2004 issue of The Independent Review.

Gabriel Kolko's Another Century of War? is a sequel to his Century of War: Politics, Conflicts, and Society Since 1914 (New York: New Press, 1994). Kolko's answer to the question posed in the book's title is both pessimistic and compelling: despite the collapse of communism, the world is riskier than ever before, primarily because of “America's capacity and readiness to intervene virtually anywhere” (p. ix).

Kolko advocates a noninterventionist foreign policy, calling on the United States to close its bases overseas, pull back its fleets, and let the rest of the world find its own way (p. 150). With the events of 9/11, asymmetrical war has now come to America's own shores, making recognition of the adverse consequences of chronic U.S. interventionism imperative. Kolko is pessimistic, however, predicting that the United States will prove unable to renounce what he sees as its “vainglorious and irrational ambition to run the world” (p. 150).

Kolko criticizes Americans' faith in the capacity of their military and technological superiority to solve what are really political problems requiring political solutions. Workable political solutions “require another mentality and much more wisdom, including a readiness to compromise and, above all, to stay out of the affairs of other nations. Otherwise, they will not succeed” (p. 140).

In Kolko's view, policymakers have consistently defined U.S. interests and priorities too broadly, failing to set clear priorities or to recognize any limits on U.S. power. For example, the “war on terrorism” represents an open-ended commitment to defeat a phenomenon of the modern age rather than a clearly defined enemy. Unfortunately, the George W. Bush administration is only the most recent one to intervene abroad on behalf of ill-defined U.S. interests. Over the years, our vital interests have been defined to include the maintenance of political and economic “stability” in countries where we have military bases or corporate investments, the prevention of “power vacuums,” and the preservation of “credibility” with other nations, leading to a long series of wars and to covert actions in every part of the globe.

Kolko also points to the defense establishment's need for a clear and compelling foreign threat to justify large military outlays. With the collapse of the Soviet Union, a desperate search began for a new enemy. Although China was considered briefly for this important role, the threat of terrorism has displaced China since 9/11, providing an ideal justification for bigger defense budgets: to fight an almost endless war against an enemy that transcends geographical boundaries.

The U.S. government has consistently defined terrorism as the use of violence against civilian populations by nonstate actors, such as al Qaeda, attributing such behavior to religious fundamentalism or to a hatred of Western freedoms. In reality, as Kolko observes, nonstate terrorism is better understood as a weapon of the weak in asymmetrical wars that are really fought over political issues. The U.S. government has supported nonstate terrorism where doing so suited its interests, demonstrating conclusively that the distinction between a “terrorist” and a “freedom fighter” is artificial, politically motivated, and self-serving. Moreover, this definition conveniently neglects state terrorism—the violation of fundamental political and human rights by repressive regimes determined to maintain themselves in power. The U.S. government is clearly implicated in a great deal of state terrorism, which has claimed far more lives than nonstate terrorism, through the provision of arms and military training to right-wing regimes in Latin America, the Middle East, South Asia, and Southeast Asia. Here the shortcomings of a militarized foreign policy are especially apparent, as the maintenance of political stability prevents the solution of political problems in Third World countries.

Kolko does a superb job of showing that other countries also have national interests, distinct from ours, that tend to be complex and intertwined with the internal and external policies of their immediate neighbors. Destabilizing these relationships to serve our own narrow interests is both short-sighted and dangerous, not only for the countries we target but also for our own security interests. For example, the U.S. decision in the late 1970s to set a trap for the Soviets by arming Afghan “freedom fighters” eventually led to a major defeat for the Soviets but also to the destabilization of Afghanistan, which in turn created legitimate security concerns and a major refugee problem for Pakistan. These concerns led Pakistan to provide support for the Taliban, a faction that brought political order to Afghanistan. So what was intended as a clever trap for the Soviets also contributed to the rise of the Taliban and led to the recruitment, training, and arming of Osama Bin Laden, among others.

The aftershocks of U.S. intervention in the region did not stop with these adverse consequences, bad as they were. The recent U.S. war in Afghanistan, aimed at eliminating both the Taliban and al Qaeda, could not be pursued without some degree of cooperation by Pakistan. Once the Taliban was defeated, however, Pakistan lost its leverage with the United States and now must contend again with a destabilized Afghanistan. Moreover, the short-term alliance of convenience between the United States and Pakistan raised concern in India that the Americans might be tilting toward Pakistan, thus increasing tension in the region between two nuclear-armed rivals.

Although Kolko does not make the point explicitly, his analysis clearly indicates the utter helplessness of weak states within a hegemonic regime that lacks an overarching structure of international law. One of the great benefits of the rule of law is that it limits the arbitrary, discretionary power of state agents over ordinary citizens. Government officials are limited to enforcing clear and specific rules. Where offenses are clearly defined, citizens know what they can do to behave legally and thus to avoid state sanctions (see F. A. Hayek, The Road to Serfdom [Chicago: University of Chicago Press, 1994], pp. 80–96). The international system, however, is fundamentally anarchic. Absent the rule of law, nation-states must protect themselves by arming themselves.

Although this policy might be a good thing if the United States were to exercise this power neutrally, enforcing widely accepted norms of international law, it clearly does not do so. Rather, it wields hegemonic power to advance U.S. political, economic, and national-security interests, making up the rules as it goes along, defining offenses and punishing those it characterizes as evildoers. Under such a regime, where the powers to write the rules, to judge guilt, and to prosecute offenders are vested in (or, more accurately, usurped by) a single hegemonic actor, the United States, it is difficult to imagine what strategies small, relatively powerless nations might pursue that would guarantee their safety against that actor. The old maxim of international-relations theory—that the quest for absolute security by one nation means absolute insecurity for all others—takes on even deeper meaning in the context of U.S. hegemony.

Kolko's analysis also affirms the prescience of the isolationist critique of internationalism during the Truman years. The fight between internationalists and isolationists was never really about whether the United States should be involved in the postwar world. Rather, the real issue was how much control the U.S. government should seek over political events in other nations—a control that the isolationists, led by Senator Robert Taft, consistently eschewed (see Michael T. Hayes, “The Republican Road Not Taken: The Foreign-Policy Vision of Robert A. Taft,”

Unfortunately, the Truman administration succeeded in marginalizing its chief critics by characterizing them as naive and backward-looking, thus avoiding a much-needed debate over the direction of postwar foreign policy. With Eisenhower's defeat of Taft for the Republican nomination in 1952, both major parties were firmly committed to internationalism, and the national conversation over the proper purposes and limits of U.S. foreign policy never took place. It is to be hoped that Kolko's volume will help to spark and to elevate a debate that is long overdue regarding the practical and moral limits of U.S. power.