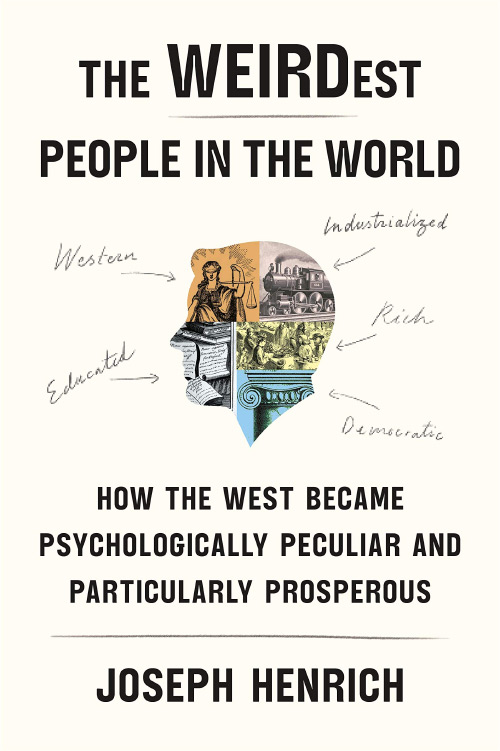 The WEIRDest People in the World
How the West Became Psychologically Peculiar and Particularly Prosperous
Joseph Henrich
Kindle Hardcover Paperback Audiobook Audio CD
This book review is a web exclusive for the Spring 2021 issue of The Independent Review.

Joseph Henrich, the Chair of the Department of Evolutionary Biology at Harvard University, argues that people who are WEIRD—“raised in a society that is Western, Educated, Industrialized, Rich, and Democratic ... [are] likely rather psychologically peculiar. Unlike much of the world today, and most people who have ever lived, we WEIRD people are highly individualistic, self-obsessed, control-oriented, nonconformist, and analytical” (p. 21).

How have people of this type come about? Henrich offers as an example an account of the rapid rise of literacy in Europe after the Protestant Reformation. Martin Luther stressed that people must be able to read the Bible themselves, rather than rely on the teachings of the Church hierarchy; and of course to do that, they had to be able to read. Hence, a massive campaign for literacy in Saxony and other German states ruled by Lutherans. This example, Henrich says, illustrates “four key ideas that will run through the rest of this book. ... 1. Religious convictions can powerfully shape decision making, psychology, and society. ... 2. Beliefs, practices, technologies, and social norms—culture—can shape our brains, biology, and psychology, including our motivations, mental abilities, and decision-making biases. ... 3. Psychological changes induced by culture can shape all manner of subsequent events by influencing what people pay attention to, how they make decisions, what institutions they prefer, and how much they innovate. ... 4. Literacy provides our first example of how Westerners became psychologically unusual” (pp. 16-17).

Henrich’s tale of the rise of the WEIRD is centered around a reversal. He first explains how societies based on clans supplanted the dominant type of human society for almost all of prehistory, small bands of hunter-gatherers. Clan society in the West in turn succumbed after the fall of the Roman Empire to an assault, led by the Roman Catholic Church, on marriage to relatives. After centuries of struggle, the modern world with its vast, impersonal markets arose and triumphed over the rest of the world. The author does not confine himself strictly to this narrative but rather ranges widely over many topics as well, such as the economic role of the Cistercian Order and, following Harold J. Berman (Law and Revolution, Cambridge, Mass.: Harvard University Press, 1988), the influence of the twelfth century canonists who studied Roman law.

All societies are based on accepting norms, tethered in instinct. “Like other primates, humans possess innate altruistic inclinations toward our close genetic relatives—kin altruism. ... Alongside kin altruism, kin-based institutions also tap into our pair-bonding instincts, which form the core of marriage. In many ways, marriage represents the keystone institution for most—though not all—societies and may be the most primeval of human institutions” (pp. 71-72, emphasis in original). Kinship ties and other bonds, including those formed by common rituals, enabled the bands of hunter gatherers to survive.

Conditions became favorable to farming around twenty thousand years ago, but to take advantage of this circumstance, “people needed to be able to secure and hold land” (p. 103), and to do this, societies had to “scale-up.” They often did so by changing “from kinship systems based on bilateral descent, where relatedness is tracked through both mother and father, to institutions favoring some degree of unilineal descent, where relatedness is either matrilineal or patrilineal” (p. 104, emphasis in original). Groups organized this way are called “clans,” and by “favoring one line of descent, clans ameliorate many of the internal conflicts found in bilateral kin-based institutions” (p. 105).

In Henrich’s account of social evolution, people in society do not say to themselves “By changing our kinship structure, we will overcome our enemies.” To the contrary, the process is unconscious; groups with institutions that enable them to flourish will be imitated by others, and these institutions will tend to prevail. This view bears a marked resemblance to Friedrich Hayek’s well-known stress on “spontaneous order,” and it is surprising that our immensely learned author never cites him. In The Fatal Conceit (London: Routledge, 1988, p. 19) for example, Hayek remarks: “Competition is a procedure of discovery, a procedure involved in all evolution, that led man unwittingly to respond to novel situations.”

As we have already indicated, the rise of the West to economic supremacy overthrew clan dominance, in large part owing to the Western Church’s marriage policy. Henrich devotes extraordinary attention to the Church’s “Marriage and Family Policy (MFP),” as may be seen in his elaborate table of “key milestones” in this policy (pp.168-171), expanded even further in Appendix A. He sums up his theory in this way: “The growth of Europe’s collective brain was nourished by the coevolution of the psychological changes and institutional developments that I’ve documented throughout this book. ... When viewed in the context of these social, psychological, and institutional changes, which accumulated gradually over a millennium, Europe’s technological and economic acceleration seems a lot less puzzling. Our story begins with the Church’s demolition of Europe’s intensive kin-based institutions. ... while large kin-groups beat nuclear families in size and interconnectedness by tying more people together, nuclear families have the potential to be part of even larger collective brains if they can build broad-ranging relationships or join voluntary groups that connect them with a sprawling network of experts” (pp. 442-43).

Despite the vast research Henrich has deployed in support of his model, it can be challenged on several grounds. (One such ground, which won’t be pursued here, questions the effectiveness of the Church’s MFP. For an example, see the review by Hilton Root on EH.Net [October, 2020]. If we ask, why do people adopt and alter the moral views they hold, one answer is that they think that these views are true, where “true” means objectively the case, not “held to be true by the members of a society.” For Henrich, this is beyond the pale. Speaking of the Declaration of Independence, for example, he says: “If the idea that people are endowed with such abstract properties [as rights] makes sense to you, then you are at least a little WEIRD ... from the perspective of most human communities, the notion that each person has inherent rights or privileges disconnected from social relationships is not self-evident. And from a scientific perspective, no ‘rights’ have yet been detected hiding in our DNA or elsewhere. This idea sells because it appeals to a particular cultural psychology” (p. 400). That is reductionism of an astonishing crudity. Rights aren’t physical, so then we can at most speak of a WEIRD belief in them. What if—what a thought—there are objectively true statements about morality not reducible to physical entities? Henrich seems unfamiliar with this view. He confuses it with the claim that moral laws apply to everyone. He says, “This is often called ‘moral realism’ instead of ‘moral universalism.’ I’ve re-labeled it to avoid importing unwanted philosophical baggage” (p.533, note 47). But the claims aren’t the same at all.

If Henrich’s view of morality is crudely reductionist, that is as nothing when compared with his account of the mental. He says that if “an omniscient engineer had crafted an integrated cognitive system for us, she certainly would have ruled out mind-body separations, since they are impossible. Dualistic conceptions like souls or ghosts should make about as much sense to us as persons who exist only on Tuesdays and Thursdays” (p. 130). Once more Henrich shows no acquaintance with the philosophical literature. While he is correct that physicalism about the mental dominates the field, the claim that dualism is impossible is something of an outlier.

Even if we stay within Henrich’s preferred framework, he is vulnerable to criticism. One of the characteristics of those with a WEIRD psychology is reliance on analytic thinking. “The key distinction is between focusing on ‘individuals’ or their ‘relationships.’ When thinking analytically, people zoom in on and isolate objects, or component parts, and assign properties to those objects or parts to explain actions. They look for strict rules or conditions that permit them to place individuals, including animals or people, into discrete categories with no overlap. ... In contrast, holistic thinkers focus not on the parts but on the whole, and specifically on the relationships between the parts or on how they fit together” (p. 53). The distinction between “parts” and “relations” is not carefully specified, and, contrary to Henrich, one can study relations without seeking harmony; one might, for example, reduce the relations that exist at one level to those of a lower level. Where do physicists who think in terms of fields of force, one wonders, fit into Henrich’s scheme of things?

To understand Henrich’s account of the analytic, one point must be kept in mind, and this he would by no means take to be an objection; as he likes to say, it is a feature, not a bug. In calling a type of thought analytic, we are not praising it as correct or rational. To the contrary, analytic thinking often errs. For example, “dispositional thinking also influences how we judge others. Psychologists label this phenomenon the Fundamental Attribution Error, though it’s not that fundamental; it’s WEIRD. In general, WEIRD people are particularly biased to attribute actions or behavioral patterns to what’s ‘inside’ others (p.33, emphasis in original). It is puzzling why Henrich thinks his own conclusions are true, if indeed he does think this, rather than ideas that appeal to him because of his cultural and evolutionary background.

In the Preface (p. xv), Henrich thanks the economic historian Joel Mokyr for his help, but we think he could have profited more from his work had he adopted the less reductionist approach to ideas of Mokyr’s A Culture of Growth (Princeton, N.J.: Princeton University Press, 2017). Nevertheless, The WEIRDest People in the World repays careful study, and one can only admire Henrich’s immense industry and ability.