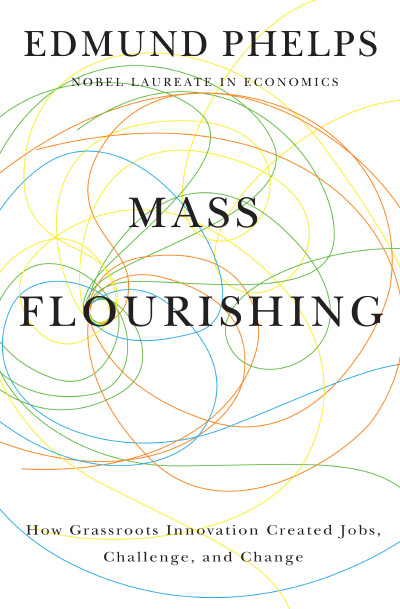 Vertigo. That’s the sensation I experienced when reading Edmund Phelps’s Mass Flourishing: How Grassroots Innovation Created Jobs, Challenge, and Change. The fault, however, isn’t Phelps’s; it’s mine. I read Phelps’s book while still working my way through Thomas Piketty’s Capital in the Twenty-First Century (Cambridge, Mass.: Belknap Press of Harvard University Press, 2014). Pondering Piketty’s obsession with differences in monetary incomes and wealth while studying Phelps’s explanation of the dynamism of modern market economies is an ideal recipe for mental disorientation.

Piketty tells of a one-dimensional, dreary, and mechanical world in which wealth grows independently of human volition and where each person is fixated on the amount of money in other people’s paychecks and bank accounts. In a contrast that could not be more stark, Phelps—the 2006 winner of the Nobel Prize in Economics— describes a world rich with varied motivations and bursting with the potential for creativity and the promise for all people of lives that are not only materially prosperous but mentally and emotionally satisfying.

In Piketty’s dystopia, a relatively small number of oligarchs—some lucky, others predatory—grab disproportionately large chunks of society’s capital. Little is left for the unimaginative masses save their growing and justifiable envy, in which they stew while hoping that governments muster the gumption to use massive taxation to confiscate and “redistribute”—or at least destroy—the oligarchs’ riches. In Phelps’s world, modern values liberate men and women from traditional superstitions and prejudices. With creative and optimistic minds, with markets and trade kept open, with property rights kept secure, and with governments’ fiscal affairs kept prudent, free, modern people unleash their innovative powers to create mass flourishing.

Unlike in Piketty’s world, the modern denizens of Phelps’s world not only are not consumed by envy but seem to be untouched by it. Also unlike for Piketty, for Phelps capital (or prosperity) is not a glob of stuff that springs forth from forces exogenous either to the kinds of human choices studied in basic microeconomics classes or to the kinds of institutions analyzed there.

Phelps’s Mass Flourishing is one of a number recent works that documents the truly astonishing improvement in the material standards of living of everyone (and especially of the masses) in market economies over the past two centuries. Also like many recent works—for example, Deirdre McCloskey’s Bourgeois Dignity: Why Economics Can’t Explain the Modern World (Chicago: University of Chicago Press, 2010) and Joel Mokyr’s The Enlightened Economy: An Economic History of Britain 1700–1850 (New Haven, Conn.: Yale University Press, 2009)—Phelps’s book emphasizes both the importance of innovation in creating modern prosperity and the key role played by ideas in making widespread, economy-changing innovation possible.

Phelps also explains that mass flourishing requires more than merely an everincreasing access to cars and air-conditioning and smartphones and meals at fusion restaurants—more even than the widespread availability of antibiotics and other livesaving drugs and medical procedures. In addition to increased consumption possibilities, mass flourishing requires challenging jobs that stimulate workers’ creativity and make them feel vital.

Phelps is adamant that an indispensable ingredient for mass flourishing is what he calls “modern values” (a term with its own long index entry in the book):

Modern values—attitudes and beliefs—continue to the present day to be prevalent . . . in the nations of the West. Modernist values include norms like thinking and working for yourself and self-expression. These values also include attitudes toward others: readiness to accept change caused or desired by others; eagerness to work with others; the desire to test oneself against others, thus to compete; and the willingness to take the initiative, thus to go first. . . . Other modernist attitudes include the desire to create, explore, and experiment, the welcoming of hurdles to surmount, the desire to be intellectually engaged, and the desire to have responsibility and to give orders. Behind these desires is a need to exercise one’s own judgment, to act on one’s own insights, and to summon up one’s own imagination. . . . Selfdiscovery and personal development are major vitalist values. . . . All this stands in contrast to traditionalism with its notions of service, obligation, family, and social harmony. (pp. 98–99)

This passage reveals that Phelps is no modern American conservative. Politicians and pundits who chirp about the importance of “family values” will find little to comfort them in Phelps’s volume. “Progressives,” though, will also find no compatriot in Phelps. Although he is hardly as vigorous or as consistent (or as eloquent) in his support for free markets as were F. A. Hayek and Milton Friedman, he is quite clear that market institutions, along with modern values, are indispensable for mass flourishing.

Phelps slams the post–WorldWar II western continental European economies so beloved by “Progressives.” Calling these economies “corporatist” and criticizing the governments there for trying to shield their citizens from the anxieties caused by economic change, Phelps argues that those economies largely free-rode on American economic dynamism:

[I]n the past three decades, up to the 2007–2008 crisis, the growth of the Big 4 on the European continent—France, Germany, Italy, and Spain—continued to be driven by advances external to their economies, mainly (but not exclusively) advances made in the United States. Thus, the degree of these economies’ catch-up with the American economy was not powered by a great rebirth of the indigenous innovation that was visible in continental Europe from about the 1870s to the 1930s. The corporatist economies must have come close to catching up with the American economy mainly by imitation. If growth relied on outside forces, by the way, the same is true of employment. A total cessation of American innovation would have sent the Continent into a long slump. (pp. 186–87)

Phelps’s thesis is quite congenial to those of us who celebrate economic growth and who understand that such growth requires both appropriate institutions (e.g., free, private-property-based markets) and a culture that celebrates and rewards the efforts that are the building blocks of that growth. Nevertheless, unlike the works of some other scholars—most notably, again, Hayek and Friedman—Phelps’s book is philosophically untidy. There is a looseness around the edges of his analysis. As carefully as Phelps does indeed ponder the requisites of economic growth and the nature of free markets, he doesn’t quite manage to do so with the same care and consistency as did Friedman or Hayek (or, I add, McCloskey).

Readers can overlook Phelps’s few surprising factual errors, such as his claim that Franklin Roosevelt successfully packed the U.S. Supreme Court. A more significant error, however, is his too-ready acceptance of the popular narrative that America’s economy has stagnated since the 1970s. A trope especially popular with the political Left, this stagnation thesis springs in part from a sloppy reading of statistics: “average hourly wage” or “median household income” do not necessarily reveal what has actually happened to the wages and incomes of flesh-and-blood people.

This stagnation thesis is fed also by what Diane Coyle shows in her superb new book GDP: A Brief but Affectionate History (Princeton, N.J.: Princeton University Press, 2014) to be a failure of national-income accounting to keep pace with economic change. Measuring early-twenty-first-century economic processes using midtwentieth- century economic categories ironically blinds us to much of the innovation that Phelps rightly celebrates. So although some national-income statistics do seem to show that economic growth has significantly slowed since Gerald Ford lived in the White House, a glance around an ordinary house in the United States today—with its computers, smartphones, e-books, flat-screen high-definition televisions, and medicine chests full of disposable contact lenses and statins—tells a very different story.

It is disappointing that Phelps uncritically repeats the stagnation thesis. Yet this disappointment detracts only slightly from the enjoyable experience of reading Mass Flourishing. Rambling in parts and featuring the occasional incongruent argument, Phelps’s book nevertheless is an important contribution to our understanding of the importance, meaning, and sources of economic growth.