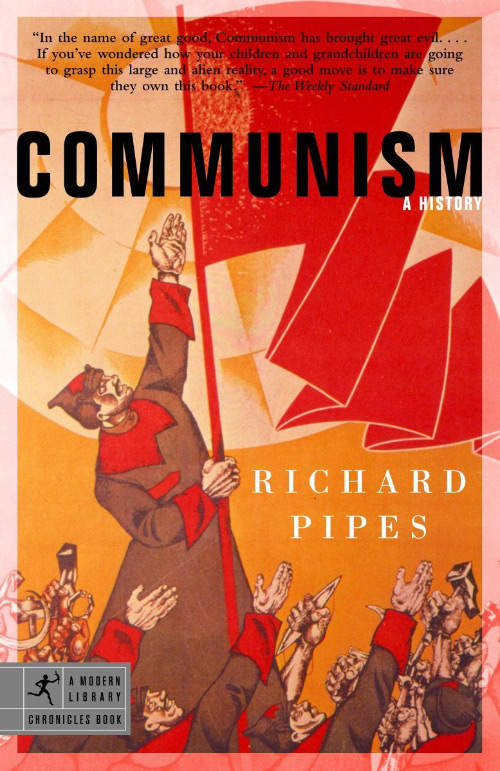 On perhaps the tenth night that I lay in bed quietly reading Communism: A History by Richard Pipes, my wife asked me why it was taking so long to read such a short book. She had checked it out. It has just 175 pages. Then a week later she peered at me again, frowned, and asked the same question. “This is a powerful book,” I explained. “It cannot be read in a hurry.”

Why is the book so good and such a slow read? The answer lies in the story the author tells and in his power to tell that story. Harvard historian Richard Pipes is best known among economists for his marvelous 1999 book Property and Freedom (New York: Vintage). During a lifetime devoted to the study of Russian history and culture, he discovered that private-property rights form the linchpin of wealth creation, and this discovery served as the basis for Property and Freedom. The present book, Communism, followed naturally.

Pipes explains why the systematic elimination of private-property rights became the critical first step in the Marxian journey that was to achieve a classless egalitarian society capable of attaining perfection. In this brave new world, wealth would move, as The Communist Manifesto declared, “from each according to his abilities, to each according to his needs.”

Pipes recounts the human slaughter that followed when Marx’s ideas were impressed on human communities. The story is at once chilling and inspiring. One is chilled by the horror of communism and for that reason inspired to make some effort, no matter how small, to keep liberty alive.

To present the facts about the implementation of communism in context, Pipes first describes humankind’s fascination with utopian dreams. Although Hesiod, Plato, Ovid, Thomas More, and Robert Owen might have believed that, by following their guidance, people could transform human nature and make life more pleasant for all in relatively short order, Marx and Engels had a different vision based in their view on science. Their new order—the elimination of private property and with it the destruction of selfish motivation—was inevitable. Capitalism as seen in the nineteenth century would be destroyed by its own dynamic, and the workers of the world would claim their rightful place in history. For Marx and Engels, the case for communism rested on positive science, not on normative bantering. We know now that they were absolutely wrong.

The takeover of Marxism by Lenin, Stalin, Mao, and Pol Pot might be described as an intellectual hijacking. However characterized, the process ultimately converted the ideas of an odd scholar into decades of purges, massacres, and wars that destroyed tens of millions. Pipes’s summary of one brief part of the Russian terror might shake even the most callused soul:

According to the evidence released from secret archives since the dissolution of the Soviet Union, during 1937 and 1938, when the Great Terror was at its height, the security organs detained for alleged “anti-Soviet activities” 1,548,366 persons, of whom 681,692 were shot—an average of 1,000 executions a day. (For comparison, the tsarist regime between 1825 and 1910 executed for political crimes 3,922 persons.) In 1941, when Germany invaded the USSR, camps run by the Gulag, their main administrative body, held 2,350,000 inmates, or 1.4 percent of the country’s population. (p. 67)

If this bloody upshot amounted to a hijacking, however, Marx had accommodated that hijacking when he wrote: “The present generation resembles the Jews whom Moses led through the wilderness. It must not only conquer a new world, it must also perish in order to make room for people who are fit for a new world” (qtd. on p. 68).

And make room they would. Chairman Mao’s policies led to the starvation of thirty million Chinese. The Khmer Rouge’s version of Marxism eliminated two million Cambodians. Of the Cambodian tragedy, Pipes notes that “there were no demonstrations anywhere in the world against these outrages and the United Nations passed no resolutions condemning them. The world took them in stride because they were committed in what was heralded as a noble cause” (p. 135).

This last point is the most frightening of all. Somehow, hope springs eternal that the right people in power can induce the right responses. Worse still, those who cling to this hope are able to disregard the human destruction that follows in the wake of their top-down prescriptions for improving life. But terrible things happen when the wrong people wield the power needed to create a world in their own image.

Pipes has written a valuable book—short but with a long message. Savor it.