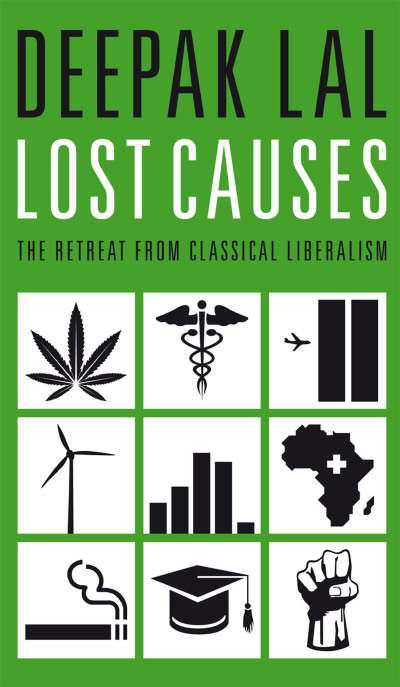 Lost Causes
The Retreat from Classical Liberalism
By Deepak Lal
Kindle Paperback
This book review appeared in the Spring 2013 issue of The Independent Review.

Deepak Lal holds the James S. Coleman Professorship of International Development Studies at the University of California, Los Angeles, and is a research fellow at the university’s Center for India and South Asia. His latest book, Lost Causes: The Retreat from Classical Liberalism, is a compilation of short topical writings, opinion editorials, and policy research papers. Bound together, these essays outline the tragic history of policies the United Kingdom has adopted in recent decades. The book is a disturbing read for an American reader because the history it describes eerily parallels the U.S. trajectory of failed plans in the twentieth century.

Many of the United Kingdom’s current social problems are obfuscated by the typical debates that surround them. To Lal, moving toward real solutions requires recognizing that today’s problems are the results of yesterday’s plans. Furthermore, yesterday’s plans were the inevitable consequences of even earlier debates in regard to political economy and the proper role of government. In other words, it is difficult to stop or slow the effects of a flood once the waters have topped the levy.

In an earlier text, Reviving the Invisible Hand: The Case for Classical Liberalism in the Twenty First Century (Princeton, N.J.: Princeton University Press, 2006), Lal explicitly supports classical-liberal public policies for the near-term and distant futures. The classical-liberal worldview is simply a framework to help us understand how social institutions operate. What cause-and-effect relationships hold in the social world? Lal’s earlier title refers to Adam Smith’s turn of phrase “the invisible hand,” which suggests the essence of classical liberalism.

Economists, political philosophers, and social theorists recognize the obvious and strong correlation between an orderly and harmonious society and a peaceful and prosperous society. Paris cannot be fed while riots plague its streets. In Smith’s words, a classical liberal sees that “little else is requisite to carry a nation from the lowest degree of barbarism to the highest degree of opulence but peace, easy taxes, and a tolerable administration of justice; the rest being brought about by the natural course of things.” For classical liberals, the invisible hand best explains the source of order in society. Interacting individuals guided by their own subjectively determined but rational self-interests tend also to promote order and harmony in the wider society.

Classical liberals therefore tend to support laissez-faire or “hands-off ” approaches to economic policy. If individuals’ actions and interactions are the crucial contributors to social order, then not only should government stay out of the way, but the essential task of designing good government must be framed to place effective constraints on government. How do we assure that neither malicious totalitarians nor moronic bureaucrats will threaten the otherwise functional aspects of social order?

Lost Causes begins from the simple and obvious observation that the United Kingdom, like much of today’s developed Western world, has veered far from classical liberalism, with significant consequences. The policy realms infected with systematic error and failure abound, including education, public health, urban planning, and national defense. No part of society remains free of government subsidy and government management. Lal’s explanatory mechanism for why liberalism has retreated seems compelling. As financing strategies fail on the margin, they make way for fuller governmental management. As management plans fail on the margin, they make way for total governmental control. But what allowed government financing in the first place? In a world obsessed with debating the merits of alternative plans, we rarely return to the deeper and more fundamental debates surrounding the appropriateness of planning itself.

Lal is in many ways a Hayekian. He sees the inevitability of policy failure not as the consequence of particularly bad policies, but rather as the inherent potential of applied central planning itself. For F. A. Hayek, society’s preferences for economic production and distribution are meaningfully communicated through real market prices. When central planners suppress market prices, they lack the local knowledge necessary to infuse decisions with rational social preferences. Therefore, the historical expansion in the scope of government—from law and order into all walks of society— has meant a continual decline in relevant knowledge. In particular, the knowledge needed to recognize social processes as failed planning has declined. Hence, failed plans are a self-fulfilling prophecy, a slippery slope as Hayek would see it, or, as Lal’s title alludes, a litany of “lost causes.”

As a classical liberal myself, I felt divided while reading Lal’s book. The book is disturbing for Americans unfamiliar with British politics, who may feel as if they are reading science fiction. In a nation similar to ours, policies fail much as ours do. Yet for the same reason, Lost Causes brings me hope because it lets me know that American classical liberals are not alone. Lal is hard at work in tracking the implications of ideological and social change across national contexts. Classical liberalism, one hopes, will serve not only as a vision of a potentially preferable world, but also as a framework for identifying and understanding our present failures.