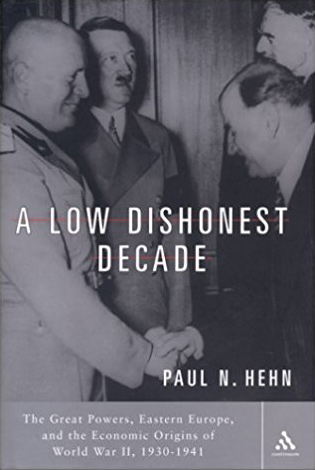 The causes and outbreak of World War II have formed the subject matter for one of most active subfields of diplomatic history, and scholars continue to work out the various details in the general picture. Yet, on the whole, few historians have been willing to depart radically from the old paradigm of “Hitler and the march to war.” A. J. P. Taylor did so in his classic work The Origins of the Second World War (New York: Premier, 1961). Some we might now call “Old Revisionists,” such as Harry Elmer Barnes and Charles Callan Tansill, did so in the 1940s and 1950s. By and large, however, historians have been unwilling to depart from the paradigm itself.

In A Low Dishonest Decade, Paul N. Hehn attempts to do so. He rethinks the origins of World War II by reading diplomatic history through the lens of economic and political history. A number of earlier works, in particular David E. Kaiser's Economic Diplomacy and the Origins of the Second World War: Germany, Britain, France, and Eastern Europe, 1930–1939 (Princeton, N.J.: Princeton University Press, 1980), have been devoted to the theme of economic diplomacy with regard to eastern Europe before World War II. Hehn's work goes well beyond earlier works, however, by integrating research on the internal dynamics of the countries involved in what one might call technical economic diplomacy. The result is a big book: more than five hundred pages of text and many pages of notes at the end.

Hehn states his thesis clearly at the outset: World War II erupted out of “an economic and political conflict over Eastern Europe during the tariff wars era of the 1930s” (p. 4). His chapters are semi-independent studies of aspects of this thesis.

The main story, outlined in his first chapter and expanded on throughout the book, is as follows. After World War I, the international economic system was in terrific disarray. The prewar system—based on the balance-of-power system, the international gold standard, the self-regulating market, and the liberal state—was for the most part gone. Imperialism remained as a kind of external factor, but even in that regard, colonies and power had been redistributed, to the confusion of the system. The liberal states had disappeared or had been transformed, and the international system was now marked by political and economic imbalance, a result of both the war and deeper structural economic changes. The main feature in the postwar economies was a slow revival of production and trade and, especially in the 1930s, a disoriented market. At home, demand for goods fell, and the Great Powers' governments “unwisely engaged in an intense struggle for trade and market share” (p. 14). Yet trade continued to decline. In essence, “imperialist rivalries” reemerged. In hopes of selling more goods to jump-start their economies, the Great Powers raised tariffs and organized the world market into several commercial blocs. The British maintained a bloc based on their old imperial dependencies. The French formed a bloc based on the French franc. The Germans created a trading bloc consisting of countries (especially in southeastern Europe) that agreed to “clearing” arrangements by which they engaged in a kind of international barter system, exchanging local goods for subsidized German goods.

Germany constitutes the critical element in Hehn's picture. It had fallen from creditor status to debtor status, and it had lost its colonies in the Paris Peace (a crucial element in Hehn's argument). Its productive capacities, damaged disastrously by war and inflation, had to be painstakingly reestablished after the early 1920s. The Great Depression brought gridlock to the economy. Home demand dropped. Government debt was enormous. Above all of these problems, limitations on German access to foodstuffs and raw materials stood out as crucial. Hitler was intent on rearmament and autarky, but the arrival of the National Socialists to power in 1933 signaled in the economic sphere the reemergence of Hjalmar Schacht, the financial wizard of the early Weimar Republic and a man who did not quite fit doctrinally into the Nazi fold. Schacht headed the German government's economic program until 1936–37. Overseeing a spate of economic controls and massive government intervention into the economy, he thought that “freer world trade” was absolutely necessary in order for future Germany to have enough food and raw materials to exist. Indeed, in order to obtain this “freer trade” that would allow Germany to survive in the long term, he proposed to reestablish overseas colonies for Germany (an initiative that Hitler opposed, by the way). Without this release valve, said Schacht, Germany would have to fight a war for resources.

Britain, France, and the United States would not countenance German colonies, but Britain in particular, through the Anglo-German Payments Agreement of 1934, allowed Germany to trade with and through Britain in spite of Germany's indebtedness, thereby helping to finance Germany's rearmament, a policy that persisted until 1938.

Meanwhile, an even greater conflict grew in connection with a related question: Who would dominate the trade of east central and eastern Europe? Ultimately, with colonization cut off as a means of gaining raw materials, the Germans turned to the east, bolstered by Hitler's Social Darwinist theory of “living space” (Lebensraum, discussed in Hehn's excellent chapter 5). This clash, in Hehn's telling, led directly to the war. His key to the problem is the Balkans, Yugoslavia in particular. Here the National Socialist government simply extended, often in more brutal fashion, pre–World War I German plans for eastern European hegemony, for establishing a Mitteleuropa that would serve as a field for obtaining raw materials and for bolstering German economic activities.

A considerable part of Hehn's work is devoted to German trading relations with eastern and southeastern Europe and to the Great Powers' reactions to these initiatives. Britain, too, desired a presence in the Balkans, seeking trading partners to restore her declining share in the world market. France was interested as well. Thus, when Germany seemed to be succeeding in laying the groundwork for “hegemony” in the late 1930s, Britain and France attempted to “deflect Hitler to the east to attack the Soviet Union, a policy that reached its high point at the Munich Conference in September 1938” (p. 394). When Hitler declined to be deflected in this way, the outbreak of the war followed more or less automatically. Still, the competition for eastern European trade and resources shaped the outbreak and course of the war. Hitler's desire for “living space” and for resources in Poland prompted the war that Germany launched in 1939. Hehn shows further how the contest for Yugoslavian and Romanian resources affected the expansion of the war two years later, as the Germans prepared to attack the Soviet Union in 1941.

Hehn deals with the United States in various connections throughout the work, but his story is focused on Germany, Britain, and the origins of the European war. Where Roosevelt is involved in the episodes Hehn recounts, he usually stands on the sidelines. Yet the author attributes the same motivations to Roosevelt's foreign policy in the 1930s, which, he says “was largely guided by self-interested considerations of trade” (p. 316). Roosevelt's diplomacy toward the Germans was “uncoordinated, by turns conciliatory and assertive.” Roosevelt sympathized with the German need for raw materials, and U.S. policy toward Europe in the 1930s was for the most part more concerned to regain the U.S. share of trade lost to the British trading bloc. Still, the Americans were not nearly so involved in this crucial part of Hehn's story as were the British or even the French.

Hence, Hehn discusses the outbreak of the war with little to say about political “appeasement,” the Spanish Civil War, the remilitarization of the Rhineland, or the dispute over Danzig. Indeed, he maintains explicitly that previous theories about and approaches to understanding the war's origin have missed the mark. The war started over the issue of “market share,” and the villain, as Hehn explains, is “capitalism” (p. 394).

This particular generalization might serve as the starting point of a critique of A Low Dishonest Decade. Hehn's economic vocabulary is sometimes a bit misleading. As his primary economic idiom, he adopts Keynesian macrospeak, a language of trade balances and imbalances, deficit spending, and the like. Deficit spending for armaments, he suggests, solved the main problems of the depression without the “redistribution of wealth and social transformation” that in his view should have been made the cure (p. 404). Indeed, here Hehn seems to mix the Keynesian and Marxian vocabulary, employing a scattering of Marxist taglines (“global competition for trade and market share,” “historic collapse and failure of world capitalism”). It is probably unnecessary to add that he almost never employs any of the ideas from the Hayekian or Misesian language of interventionism, statism, and so forth, although an analysis of the Planwirtschaft might well have helped him to make several significant connections. This double idiom—combining the two collectivist vocabularies of Keynes and Marx—leads to some problems in the book. At times, the author fails to make clear whether he is describing conventional mercantilist (or neomercantilist) trade wars or a systemic clash deriving from the Inevitability of History.

Likewise, although Hehn strives strenuously to show the connections between the economic side and the political and diplomatic sides, sometimes those connections are not clear at all, or at least not integrated in a way that makes them clear. Some of the most compelling sections (for example, the chapter devoted to Prince Paul of Yugoslavia and the Belgrade Coup of March 1941) are more like traditional diplomatic or political history than not.

Another aspect of Hehn's approach limits his analysis: he focuses almost exclusively on government agencies, entities, and officials. In a book on trading rivalries, he makes little mention of the private sector. One might imagine that each of Hehn's rival governments was actually producing the goods and creating the wealth that he discusses. His focus on governments also leads him to neglect an extended analysis of the role of international banking in the coming of the war. The bankers in the book are all government bankers: Hjalmar Schacht, Montagu Norman, and the like. One sees no “capitalists” at all, except for German “capitalists” such as Carl Krauch, the I. G. Farben magnate who became one of the most important cogs in Hitler's Four-Year Plan office on a dollar-a-year basis. Surely this story warrants some mention of actors and agents who were not government officials.

Despite these problems, Hehn's book succeeds highly in many ways and breaks new ground in some respects. On the whole, Hehn succeeds in his task of tying together traditional diplomatic history and the lesser-known economic and financial story. He has a fine way of sizing up a situation, and his use of detail in doing so is frequently striking. His work draws together effectively a number of recent studies on specific aspects of the war that previously had not been considered together. He synchronizes these studies and the more traditional literature with his own extensive archival work in British, American, and German files. A look at his vast research apparatus (a hundred pages of footnotes and bibliography) would be humbling for many historians.

Perhaps the major contribution of this work is that in an area of studies whose motor has been historians' fascination with the political or diplomatic origins of the war—indeed, frequently, with its personal origins in the form of Hitler—Hehn makes a convincing case for a less stylized and less pat explanation of those origins. He contends forthrightly that economic rivalries among interventionist (not his word) governments formed the essential and primary cause of World War II. Whether those interested in the history of the twentieth century accept his thesis as a whole or integrate his work into a broader interpretation, A Low Dishonest Decade is a significant book they should not ignore.