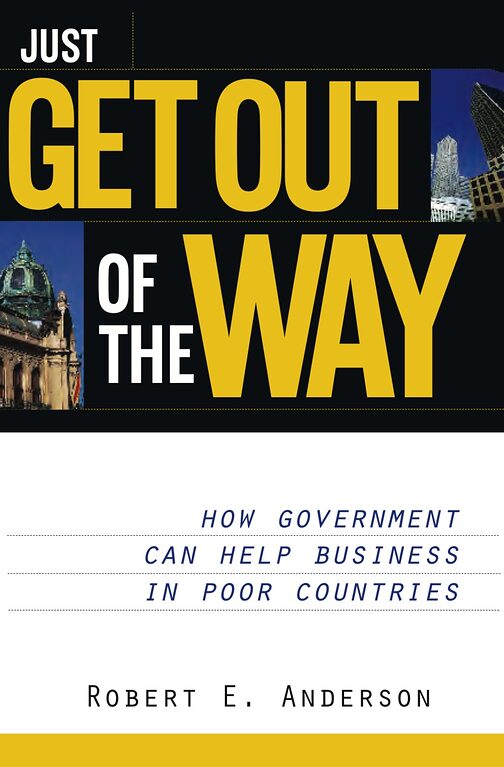 Just Get Out of the Way
How Government Can Help Business in Poor Countries
Robert E. Anderson
Kindle Hardcover
This book review appeared in the Winter 2004/05 issue of The Independent Review.

Just Get Out of the Way is a very good book, though I wish it had a better title. The danger is that it might be dismissed as just another ideologically driven “do away with the state” toolkit—convincing only to people already of like mind and rarely read by those who really need to hear its message. Such dismissal would be a shame because this book is not about ideology at all. Instead, it is about something that is all too often missing from discussions of development policy: sound economic and business principles, consistently applied, buttressed by simple common sense and a healthy dose of pragmatism. (Are all these expressions synonymous? If not, then they should be.)

Robert Anderson, a development consultant and former World Bank economist, is a convinced free-market advocate. He takes it for granted that the only way to promote long-term economic growth in poor countries is to transfer most economic activities from the public to the private sector. However, this transfer in itself is not enough because a good “business environment” is also needed in order to encourage the private sector to function efficiently. Indeed, if the market economy works better than any other alternative, it does so not because private businesspeople are somehow better people: “Private businesspeople are not inherently more honest or more capable than government officials and politicians” (p. 6). In fact, they are just as self-serving as the rest of us ordinary humans. What makes the market economy tick is competition; without this crucial element, there is no guarantee that the resources the private sector employs will in fact be used efficiently. Echoing an insight that dates at least from the time of Adam Smith, Anderson notes that businesspeople everywhere (and not just in the Third World) are quite creative in enlisting the government’s help in order to stifle competition. The trick, therefore, is not to let them get away with it. And “there’s the rub,” because the low levels of competence in Third World officialdom, coupled with high levels of corruption, increase the likelihood that private special-interest groups will end up manipulating government power for their own purposes. This problem should be constantly borne in mind, says Anderson, especially when implementing policies designed to “strengthen the private sector” because the designers of these policies apparently do not seem to realize that they will be implemented in countries with weak institutional and legal structures. Most of the book is devoted to showing how policies that conceivably might work in developed countries (many of them are questionable even there) are often disastrous when transplanted to the totally different institutional contexts that prevail in poor countries.

Privatization of state-owned enterprises is a case in point. Everyone now thinks this is a good thing (Anderson does, too), and a minor industry of “experts” has arisen to peddle “advice” on privatization programs. Too often, however, these programs stress dozens of ancillary objectives that privatization is supposed to accomplish, even to the point of negating what should be the main purpose: transferring control of assets to whoever can use them most effectively and selling them for the highest price that can be obtained because these assets belong to all citizens. Instead of adopting this commonsense approach, however, governments often place misguided and self-defeating restrictions, such as selling only part of the company (often retaining a noncontrolling share), placing limitations on foreign bidders, or conditioning the winning bid not only on the offered price but on the “quality” of the bidders’ “business plans” or on the “future investments” they promise to make in the newly privatized company. Anderson argues that any departure from what he calls “best practice” privatization—that is, sell 100 percent of the company in an auction open to any and all investors, domestic or foreign, for the highest cash price—will likely result in a lower sales price for the government’s assets or in opportunities for corruption and “cronyism.” Bottom line: just sell it!

Throughout the book, the author emphasizes issues of corporate governance, and although the book deals for the most part with problems in developing countries, it can serve just as easily as an excellent casebook for courses on applied corporate finance. In fact, the last time I read such a concentrated dosage of good business sense was in a collection of Berkshire Hathaway shareholder reports (“Lord Bauer, meet Warren Buffett”). Anderson’s discussion of bankruptcy is especially effective, and here his approach is to stick to one simple point: “a bankrupt company should continue to operate ... if its going-concern value exceeds its liquidation value. If not, the company should be liquidated, cease operations, and sell its assets to others who can make better use of them” (p. 175, emphasis in original). In other words, the ultimate objective should be to maximize economic efficiency (much the same objective, of course, that is ostensibly pursued in privatizing state-run enterprises). In practice, this approach amounts to steering clear of two pitfalls: on the one hand, needlessly liquidating still-viable companies, and, on the other, allowing unviable companies to continue to operate and waste resources that other firms can put to better use. What legal arrangements are best suited to minimize both of these risks? Anderson perceives a growing tendency for “many experts and international development institutions [to] support the option of a government or court-managed restructuring [of companies] in poor countries simply because it is what the rich countries do” (p. 178). He doubts that this avenue necessarily leads to the most efficient outcome even in those countries, and in developing countries it often gets resources more or less permanently “trapped in zombie companies with no economic future that are kept alive by the government” (p. 174).

Overall, one of the book’s most appealing aspects is the author’s willingness to call a spade a spade. Textbook theory stresses the banking system’s all-important role in channeling savings into new investment. In practice, however, banks in developing countries are often little more than Ponzi games and pyramid schemes; instead of contributing to capital formation, they often squander a large proportion of savings. The main culprits, in Anderson’s view, are the existence of explicit or implicit government deposit insurance and the well-known moral-hazard problems that inevitably follow. Elaborate banking regulations designed to protect the depositing public are of little avail, even in rich countries with more or less competent bureaucracies. Attempting to transplant these bank-supervision techniques to poor countries is an exercise in futility: “If [rich] countries cannot successfully implement such a system, is it plausible that poor countries can do so given their weaker governmental institutions and political systems?” (p. 141). For the latter countries, it seems, the best we can realistically hope for is the private monitoring of banks, and the best way to do that is to “eliminate deposit insurance entirely” (p. 160).

Just Get Out of the Way makes easy reading, and for a serious book on a serious subject it is often very entertaining. Anderson makes good use of the available empirical evidence, and the first three chapters contain a number of interesting tables and charts, some of which are quite eye-popping (don’t miss figure 3-4, on p. 66, a cross-country comparison of CEO compensation). The book is also peppered with interesting tidbits gleaned from the technical literature. (My personal favorite is a finance-type “event” study, published in the Journal of Accounting and Economics, which examined what happened to the share price of U.S. companies when their senior executives died unexpectedly, say, because of plane crashes or heart attacks. Surprisingly, share prices often increased after the deaths, which suggests a new twist on the hoary old lawyer joke: What do you call a hundred CEOs dead at the bottom of the sea? “A market rally.”)

Anderson has written a thoughtful and informative analysis of the problems that developing countries currently face in their transitions to market-based economies. He has mapped some of the pitfalls to be avoided, and if his book gets the wide readership it deserves, then (one hopes) we may learn a little from our mistakes.