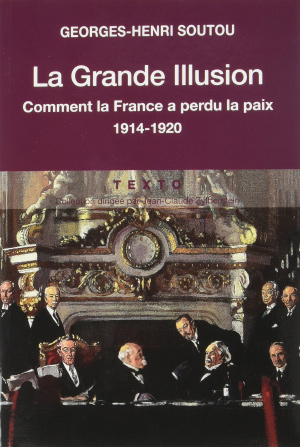 In La grande illusion, Georges-Henri Soutou, a distinguished diplomatic historian and professor emeritus at the Sorbonne, sets out to show, as his subtitle indicates, “how France lost the peace, 1914–1920.” What makes this study particularly persuasive is that the author has little sympathy for France’s enemies in the First World War. His interpretation of German actions leading up to the war comes primarily through unsympathetic interpreters of the German kaiser and his general staff, such as Fritz Fischer and John Rohl. Indeed, in reading Soutou’s relevant statements, I thought he might have looked at more balanced material on Germany—for example, Christopher Clark’s readily accessible and thoroughly researched biography of Kaiser Wilhelm. Soutou’s examination of Franco-Russian relations in the decade before the outbreak of the war, moreover, seems disproportionately critical of the Russians. This view undoubtedly reflects the influence of Sean McMeekin, who in The Russian Origins of the First World War (Cambridge, Mass.: Harvard University Press, 2011) explores czarist Russia’s efforts to incite war in the Balkans. This effort was undertaken, according to McMeekin, in order to allow Russia to grab the Straits and Istanbul.

In Iswolski und der Weltkrieg (Berlin: Verlagsgesellschaft für Politik und Geschichte, 1924), German diplomatic historian Friedrich Stieve documents the remarkably revealing correspondence between French foreign minister Raymond Poincar´e and his Russian counterpart Alexander Izvolsky. Stieve’s study seems to prove beyond a doubt that the French government was provoking the Russians to go to war against Germany as soon as France did. The French cleverly managed to turn the focus of Russia’s war planning from its Austro-Hungarian rival in the Balkans to the German Empire. The French also subsidized a railroad line that would carry Russian troops into East Prussia once war broke out in the West. If Izvolsky said when the shooting started, “C’est ma guerre!” then French president Poincar´e might have said the same with equal conviction.

There are only fleeting references in Soutou’s work to the British starvation blockade, which caused the deaths of hundreds of thousands of German civilians, in particular children. The German use of submarine warfare, which served as an occasion to bring the pro-British U.S. government into the war, was intended to break this inhuman blockade. Because German vessels were vastly outnumbered on the sea by British ones, stealthy, indiscriminate attacks seemed the only possible means to divert the British navy from starving Germans. Soutou also depicts U.S. president Woodrow Wilson as a deeply moral leader who wished to be neutral in the European conflict.

Although Wilson’s Republican opponents, such as Theodore Roosevelt, Henry Cabot Lodge, and Elihu Root, were even more bellicose Anglophile interventionists, nothing would lead me to regard Wilson as evenhanded. It is truly remarkable how little Wilson and his secretary of state, Robert Lansing, did to call attention to the British hunger blockade and its effects on German behavior. It was also Wilson who insisted on the destruction of what remained of the Austro-Hungarian Empire, which had tried to extricate itself from the war since 1916. Although French war hawk and eventual premier Georges Clemenceau tried to save the empire, if only as a counterweight to Germany, Wilson denounced it as an undemocratic prison house of national minorities.

It may be an implicit teaching in Soutou’s work that the actions taken by the United States, especially becoming an associate belligerent on the Allied side, were the kiss of death for the Old World. By war’s end, as Soutou explains, “the situation was far from satisfactory for France: the British and the Americans since the fall of 1917 played an increasing role (both military and economic) in the conflict. France in spite of its incontestable victory had relatively less weight by November 1918 that it had enjoyed at the beginning of the war. This was the price that had to be paid for having flatly rejected a compromise peace in the fall of 1917” (p. 286, acceptable translation). Soutou demonstrates exhaustively that the French and Germans had ample opportunities to end the war with a compromise peace, but the arrival of American troops in the fall of 1917 and the elevation of Clemenceau to the premiership on November 7, 1917, as an associate of the anti-German hard-line president Poincaré doomed these efforts.

Both the Germans and the French developed elaborate plans by the end of 1914 for dominating the continent if they were to prevail in the struggle. Thus, Soutou’s presentation of the German design for controlling East Central Europe and Belgium, which the Germans invaded on their way to France in August 1914, as something peculiar to the Central Powers reveals selective history at its worst. Like the Germans with their plan for Mitteleuropa, French political and military leaders hoped to create their own zone of political and economic control once they defeated their enemy. It would include direct or indirect rule over Luxembourg, the German Saar region, and most of the rest of the left bank of the Rhine. These acquisitions, plus the return of Alsace-Lorraine, which France had lost in the Franco-Prussian War, would make the country competitive with England in steel and iron production. It would also reduce to economic insignificance France’s pesky German enemy, which would be kept down permanently through discriminatory trade policies. The French hoped to annex Luxembourg directly by inciting an insurrection against the grand duchess who ruled that country. They also intended to bring Belgium more fully under their guidance.

In both Germany and France, more moderate elements in high places were open to a negotiated peace, and these elements came to the fore in 1917, before American forces came into play. Under the premiership of Paul Painlevé from September to early November 1917 and even earlier through the efforts of Aristide Briand, who had been in French cabinets since 1916, peace feelers were put out to the enemy side. Among the Germans, Baron von der Lancken, a chief official in occupied Belgium, and Count Harry Kessler, a close friend of Kaiser Wilhelm, were the principle actors in negotiations, most of which took place in neutral Switzerland. A moving force on the French side who enjoyed support in the French cabinet was Professor Emile Haguenin. This gentleman, who was attached to the French embassy in Bern, spent thirteen years teaching romance languages at the University of Berlin and spoke fluent German. Haguenin became Kessler’s major negotiating partner. By the beginning of 1917, the German government—by which Kessler meant his friend and distant relative the kaiser and the German minister of foreign affairs, Richard von Kühlmann—was willing to evacuate Belgium and arrange for some kind of not yet fully specified transfer of Alsace-Lorraine back to France.

In return, Germany would not be economically excluded from trade arrangements with the Allies and would be given a free hand in the East. (This last point became extremely important as the Russian front was beginning to collapse with the fall of the czarist regime in February 1917.) Unfortunately, by September the German government’s willingness to make concessions on Alsace-Lorraine was up in the air as military leaders raised sharp objections. Still, as Soutou points out, von der Lancken and other intermediaries reassured the French government that the Germans, like the French, were no longer able to hope for “total victory.” Therefore, the German government would have to make further concessions in order to extricate itself from a devastating conflict. A point that one can glean from Soutou’s work is that the harsh peace that the Germans imposed on Communist Russia in March 1918 (a peace that the Germans may have needed in order to counter the effects of the British hunger blockade) was no more than the free hand in the East that French negotiators had discussed. As the Russians became increasingly irrelevant to the Western war effort, the French abandoned them. It was only when Western governments feared that the Bolsheviks threatened the postwar European order that they became concerned about Russia again.

Soutou’s discussion of the beginnings of Atlanticism following American entanglement in the European conflict is, at least for this reader, the most eye-opening aspect of his work. Four visions of European political and/or economic relations emerged during the war. Two could be realized by the Germans or the French by imposing a vindictive peace on the losing side. The third vision was a return in some form to the European “concert” that had been established at the Congress of Vienna in 1815. Thoughtful conservatives on both sides looked back nostalgically at this model and emphasized the need for placing balance-of-power concerns before the right of all peoples to achieve national autonomy or enjoy an expanding list of “rights.” Indeed, even French republicans who gloried in their Jacobin revolution did not believe that inciting “democratic revolutions” everywhere promoted their country’s interests.

But it was the American Atlanticist vision that the European Allied powers ultimately had to accept—or at least pay lip service to. This vision entailed both the Wilsonian ideal of a world of democratic nations, supposedly modeled on an ideal American polity, and the acceptance of American or Anglo-American political and economic leadership. In France, André Tardieu, the official put in charge of overseeing Franco-American affairs and a key adviser to the French Ministry of Commerce, and renowned economic historian Henri Hauser happily viewed the future of their country as junior partner to the American economic giant. Hauser was the most ideologically motivated of the Atlanticist faction. A French Jew who was deeply committed to Jacobin ideas about universal democracy, he believed that the crusade begun by the French had now been taken up by the Americans and was more specifically embodied by President Wilson.

Hauser combined this world-liberating vision with a profound revulsion for the Germans, whom he saw as the bearers of an autocratic tradition. Although on the French left, Hauser outdid the most extreme French nationalist in calling for a Carthaginian peace against the Central Powers. In a text submitted to the Ministry of Commerce and later published in the Neue Zürcher Zeitung (January 14, 1918), he called for rendering the Germans economically powerless by putting them in a position in which they would depend indefinitely on their former enemies for primary materials. This would certainly not be the last time that Atlanticism would combine American economic dominance with revolutionary rhetoric and the designation of an antidemocratic enemy. In our own times, neo-Wilsonians and in particular neoconservatives have expounded the same ideas about America’s moral mission to the world. (Murray Rothbard used to joke that Sidney Hook was the first neoconservative. He had apparently never read the political tracts of Henri Hauser.)