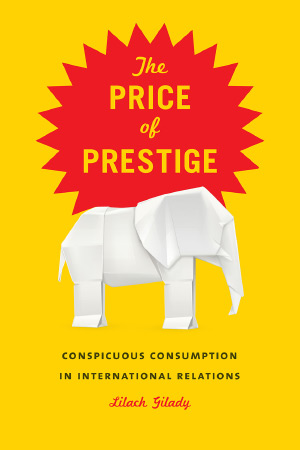 The Price of Prestige
Conspicuous Consumption in International Relations
By Lilach Gilady
Kindle Hardcover
This book review appeared in the Spring 2019 issue of The Independent Review.

In his surprise announcement of a Space Force—a sixth branch of the U.S. military—on June 18, 2018, President Donald J. Trump argued that its establishment would be “great not only in terms of jobs and everything else, it’s great for the psyche of our country” (quoted in Katie Rogers, “Trump Orders Establishment of Space Force as Sixth Military Branch,” New York Times, June 18, 2018). This move harkens back to the arms and space races of the Cold War, when the United States poured its considerable resources into being more technologically advanced and militarily prepared than its main competitor, the Soviet Union, and gloried in this fact.

Lilach Gilady’s book The Price of Prestige: Conspicuous Consumption in International Relations offers significant insight into President Trump’s decision to endorse an exceptional, new, and expensive branch of the military while concurrently targeting the U.S. international affairs budget (which supports diplomacy and foreign assistance) for significant cuts. Gilady uses a rational-choice framework and the work of Thorstein Veblen to develop a theoretical foray into the role that considerations of prestige play in shaping states’ behavior on the world stage.

The originator of the idea of “conspicuous consumption,” Veblen published his seminal work The Theory of the Leisure Class in 1899. Gilady’s theoretical innovation is to import Veblen’s ideas into the realm of international relations, where “policy decisions are not only a means for achieving specific material goals but are also a gesture to be observed by other peers” (p. 2). Gilady uses the Veblenian framework to examine a wide range of international luxuries in order to unpack conspicuous consumption as a specific form of prestige-seeking behavior in international relations. In doing so, she argues for a differentiation between the concepts of power and prestige, wherein the latter is a social, hierarchical, and positional concept with important normative dimensions (p. 7). Gilady draws on a wide body of literature to illustrate her theory, ranging from the works of Rudyard Kipling and Rabbi Hillel to anthropological studies of indigenous populations and contemporary political science scholarship. The result of this effort is that positionality and hierarchy emerge as essential components of our understanding of why states behave in apparently suboptimal ways.

Gilady positions herself as building upon existing theory, both constructivist and rationalist, rather that offering a wholesale explanation of international relations. Throughout the book, she is careful to stress that her theoretical account is a complement, not an alternative, to other perspectives. States face important spending decisions, including what to spend on and how much to spend. But existing explanations, including those that focus on security in a self-help system, often fall short in providing a satisfactory account of extreme spending decisions, such as the proposed Space Force.

The limitations of security-driven explanations are most evident in chapter 4, “A Contest of Beneficence: Prosociality in International Relations.” Analyses of foreign aid and other beneficial international policies typically pit altruisticmotivations against material ones. Gilady expands this framework by introducing social benefits into the equation. By arguing that “spending precious resources in order to benefit others can be seen as a form of luxury,” she provides a new lens through which we can better understand the efforts by still-developing countries, such as China and India, to provide foreign aid (p. 94).

Gilady also provides a compelling explanation for shifts in the composition of United Nations (UN) peacekeeping forces over time: as more and more countries deployed peacekeepers (i.e., bandwagoning), the practice declined in value as a status symbol. In 1990, the top-three contributing countries were wealthy and secure: Canada, Finland, and Austria. Twenty-eight years later, Ethiopia, Bangladesh, and Rwanda are currently ranked as the top-three UN peacekeeping contributors (“United Nations Peacekeeping, Troop, and Police Contributors,” July 31, 2018). “Participation in peacekeeping operations is simply too cheap,” Gilady argues. “It is therefore not an exclusive enough club to retain the middle powers” (p. 117).

Although Gilady addresses conspicuous consumption in the areas of both Big Science and military platforms, The Price of Prestige misses out on important opportunities to examine the intersection of the themes she explores. In particular, there seems to be significant interaction between the race for advanced weapons systems, such as aircraft carriers, and Big Science. Yet China’s acquisition of an aircraft carrier and its first mannedmission into space are discussed in separate chapters.Why is it that many of the countries that have achieved the former are also pursuing the latter? And why is this not the case with other forms of conspicuous consumption that the book explores?

Likewise, there is only a limited analysis of why some states and not others engage in prestige-seeking behavior. Why is it that Brazil, not Argentina, has acquired an aircraft carrier and hosted the Olympics in recent years? Why is it that India, not Pakistan, has launched a foreign-aid program and operates not one but two aircraft carriers?We get hints of an answer from Gilady, who notes that “we should expect beneficence competitions to be more prevalent among members of stable regional subsystems in which the use of force is very unlikely” (p. 111), but further exploration of this issue is warranted.

The Price of Prestige is at its best when discussing lesser-known, historical cases of conspicuous consumption by states, such as the expeditions of the late 1760s and 1870s to observe the astronomical Transit of Venus. This choice of emphasismay very well have been by design. Many pop-culture analyses of the international relations role of common phenomena, such as theOlympics and international sportsmore broadly, already exist. Although Gilady contributes greatly to the theoretical development of that area of inquiry, she barely references it in this book. And yet a decade after the Beijing Olympics, China is doubling down on football (soccer), aiming to qualify for, host, and—by 2050—win theWorld Cup (Brook Larmer, “China Is Looking to Profit fromthe World Cup—Even though Its Soccer Team Didn’tQualify,” New York Times Magazine, June 3, 2018). Just last yearChina raised its target for special football schools to twenty thousand and aimed to have 30 million children playing the sport by the end of 2018. The idea of sports as a competition for international status and prestige is perhaps the easiest way to understand the theory forwarded by The Price of Prestige, and yet Gilady avoids the subject for what seems to be this very reason. She instead aims to demonstrate the intellectual depth of her analysis by choosing historical and somewhat obscure instances of conspicuous consumption.

What we are to take away from this book, then, is not a better understanding of why a Hermes Birkin bag worth more than $200,000 was seized from the apartment of former Malaysian prime minister Najib Razak or why one hangs on the arm of Louise Linton, wife of current U.S. secretary of the treasury Steven Mnuchin. Though individual-level decisions are frequently cited as examples, how these decisions translate into the consumption patterns of states goes unexplored in Gilady’s book.

What we do learn is that issues of conspicuous consumption really matter in international relations. Arms races are not just about security; they are also about status (and oftentimes more about the latter than about the former). We learn that the international politics of prestige play out in unexpected and often incredibly wasteful ways, with foreign-aid donors converging on a few recipients rather than coordinating for maximum impact. We learn that the price of international prestige is high and the benefits uncertain. And, unfortunately, we learn that there is relatively little that we—as taxpayers—can do to disrupt this behavior.