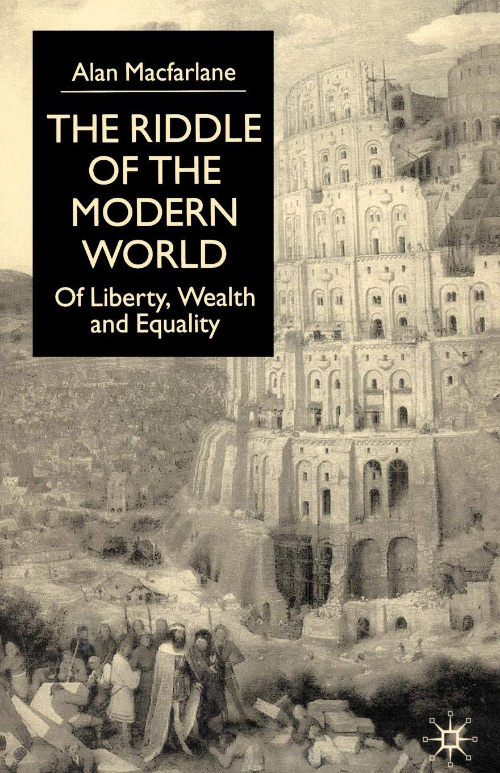 The Riddle of the Modern World
Of Liberty, Wealth, and Equality
Alan Macfarlane
Hardcover Paperback
This book review appeared in the Fall 2002 issue of The Independent Review.

Alan Macfarlane is the author of a marvelous book, The Origins of English Individualism: The Family, Property, and Social Transition (1978), which places the origins of English individualism in the twelfth century. In his most recent book, The Riddle of the Modern World, he seeks to find the sources of English exceptionalism that ushered in the modern world, looking through the eyes of a number of witnesses from the seventeenth to the twentieth centuries who have thought about these sources in a comparative framework. The first of these authors is Baron de Montesquieu (1689–1755), who lived around the time England was breaking away from the European herd and establishing the institutions that would bring about the Industrial Revolution. The next is Adam Smith (1723–90), who lived just at the cusp of the changeover from an organic agrarian economy to an industrial mineral-energy-using economy. The third is Alexis de Tocqueville (1805–59), who lived when modernity had become manifest both in England and in its offshoot, the United States of America. The fourth is the contemporary sociologist and anthropologist Ernest Gellner (1920–95).

This strategy is an interesting one, and Macfarlane’s thumbnail sketches of the lives and thought of these thinkers are cogent and concise. I learned a great deal from his discussion of Montesquieu, and I am sure that readers who do not know the writings of the other thinkers discussed in the book will likewise find much of interest in it.

There are two separate questions about the escape from Agraria, as several of Macfarlane’s thinkers were aware. The first is why, of all the Eurasian civilizations, western Europe became the pioneer of the Great Transformation. Second, a narrower question is why, within the West, a small off-shore island took off before the others. Much of the book pertains to this second question.

On the first question, Macfarlane says that the riddle of the modern world is how the natural tendency of states toward predation, which had kept agrarian civilizations in a static state, was overcome so that the natural powers of human beings to be productive and creative could be unleashed. Economic historians and development economists have spent much time and effort researching this question, and we now are beginning to see parts of the answer. From Macfarlane’s bibliography, it appears that he is unaware of this work, however, apart from Cambridge economic historian E. A. Wrigley’s splendid book on the Industrial Revolution, Continuity, Chance, and Change (Cambridge: Cambridge University Press, 1988), and Joel Mokyr’s The Lever of Riches (London: Oxford, University Press, 1990).

The correct inference that Macfarlane and his dead thinkers derive from the need to balance predation against production might have been sharpened by the model of the predatory state I have developed in my books The Hindu Equilibrium, vol. 1 (Oxford: Clarendon, 1988) and Unintended Consequences (Cambridge Mass.: MIT Press, 1998 [appendix]). In this model, the extent of rents that the predatory state can extract depends on the extent to which the state’s natural monopoly is contestable by internal or external rivals, which in turn depends on the barriers to entry—both geographical and ideological—faced by a challenger.

As many of Macfarlane’s thinkers agree, absolutism did not arise in England as it did in most of the rest of Europe both because Britain is an island, not easily invaded, and because its control was internally contestable by the barons in the unique form of feudalism that arose after the Norman invasion. The lack of an external threat meant that England, unlike the European states, did not have to maintain a standing army. The strange balance that developed between centralization and decentralization in the English state avoided both the dangers of anarchy, which threatened the wholly decentralized European feudal system, and the reestablishment of predatory states under continental-style absolutism. The work of Douglass C. North and Robert Paul Thomas (The Rise of the Western World [Cambridge: Cambridge University Press, 1973]) and of Eric Jones (The European Miracle [Cambridge: Cambridge University Press, 1981]), which is central to this theme, receives no mention in Macfarlane’s book.

The second reason Macfarlane gives for England’s exceptionalism is that England, unlike the European states of the Counter-Reformation, had no close alliance between church and state. A third reason is that the tendency for internal social predation by a high nobility defined by birth, as on the Continent, did not occur because England developed “an unprecedented social structure . . . which was based on wealth and achieved status rather than blood” (p. 281). Finally, even before the Norman invasion, farther away from Rome “there was a more thorough sweeping away of all the Roman vestiges. The Anglo-Saxons brought a legal and social system which placed an emphasis on the individual rather than the community or the clan and which emphasized individual property rights” (p. 284). By contrast, continental Europe from the twelfth century adopted Roman law, whereas the English, “after incorporating some of the organizational features of Roman law, rejected all the substantive content of the revived Roman legal system” (p. 284).

The sources of English exceptionalism, as Macfarlane’s thinkers agree, grew out of “a system based on the premises of profit-seeking through commerce, religious freedom, political responsibility and the absence of instituted hierarchies of wealth” (p. 285), a system that de Tocqueville anatomized in its purest version in the former English colonies in North America. Although the development of these tools that fashioned the scientific and industrial revolutions might solve part of the riddle, Macfarlane rightly notes that none of his thinkers “seriously address[es] the question why such tools emerged at all.” As he writes in the last sentence of the book, “why did technological and scientific growth occur so spectacularly and rapidly in Western Europe between about the 12th and 19th centuries and why, during the same period, did it slow down, cease and partly regress in other civilizations which had previously been far more ‘advanced’ than Europe?” That question, of course, is the more important one, and Macfarlane does not attempt an answer. I have ventured an answer in my book Unintended Consequences, but that is another story. Macfarlane’s thinkers aptly answer the subsidiary question within the larger one—why it was England that found the exit from Agraria—and it is good to have a book that puts this record straight.